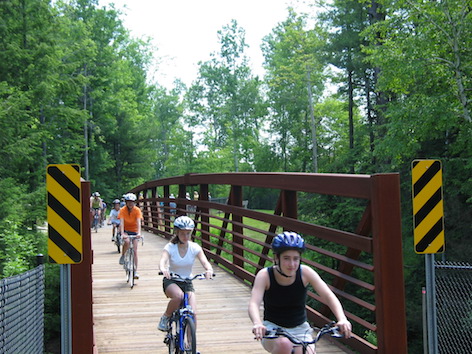 South Burlington's multi-use path, a work in progress begun in 1990, is designed to connect our neighborhoods, schools, parks and commercial areas, as well as to connect to the paths of our neighboring communities. The path is maintained year-round, and is almost always a wonderful place to enjoy some time outside walking, jogging, pushing a stroller, or bicycling. Because it's been built in fits and starts through the work of citizen groups, grants, a city-wide bond and developers, there are gaps in the path. We aim to fill them!

On August 14th, South Burlington residents will have an opportunity to vote for needed funds to fill the gaps in our 24-mile multi-use path, crosswalks, and intersections (Penny for Paths).

GOAL: Making South Burlington a more bicycle and pedestrian friendly city by closing the gaps in our existing path and creating pedestrian-friendly intersections and crosswalks.

add your name in support of this campaign

THE OPPORTUNITY: Penny for Paths - Close the Gaps" will provide a dependable source of funding for the next 10 years to start closing the gaps in our multi-use paths, as well as provide needed crosswalks and pedestrian-friendly intersections. In some cases, a short stretch linking existing paths could open up miles of new opportunity for walkers and cyclists of all ages and abilities.

CURRENT STATUS: While we are lucky to have a great system to build upon, gaps in the city's sidewalks and recreation paths leave many unable to connect to the rest of South Burlington without driving. Many neighborhoods are isolated, leaving numerous residents unable to safely ride or walk to school, city parks, or our new City Center. Sometimes the gap is as short as a quarter of a mile, or a busy intersection, and sometimes it is a long stretch that lacks commuter access.

On Tuesday, August 14th, 2018 residents voted to connect South Burlington's many paths and sidewalks by endorsing Penny for Paths on the ballot!

Thanks to all who helped support this initiative!

Starting in FY 2020 for a period of ten years, shall the City be authorized to levy an additional one penny on the annual city tax rate, the entirety of the proceeds of which are to be deposited into a reserve fund established by the City Council for the sole purpose of bicycle and pedestrian infrastructure improvements within the City? [ ] YES [ ] NO

If Article I receives a vote in the affirmative, shall bonds of the City be issued in an amount not to exceed the anticipated proceeds of the ten year one penny tax levy on the annual city tax rate, of an anticipated total amount of $2,968,537.25, for the sole purpose of funding bicycle and pedestrian improvements within the City? [ ] YES [ ] NO

For more information, check out the FAQ or contact bikeandpedcmte@gmail.com.

The City of South Burlington is divided by I-89 at the Exit 14 Interchange. US Route 2 is a principal arterial roadway that spans I-89 and is a major transportation connection between many major employment centers and residential areas in Burlington and South Burlington. This interchange area, including US Route 2, was primarily designed with motor vehicles in mind.

As part of the project stakeholder group, Local Motion is providing input to the City of South Burlington and Chittenden County Regional Planning Commission (CCRPC) to identify possible crossing improvements for pedestrians, bicyclists and transit users in the I-89 Exit 14 area, and evaluate the feasibility of those improvements.  The goal of the study is to recommend an alternative transportation crossing option that has the support of the community so that funding may be pursued for engineering, permitting, and ultimately construction.

Local Motion is working as part of the Project Team to make South Burlington streets safer for walking and biking by filling key gaps in the city's bicycle and pedestrian network on Dorset St, Airport Parkway, Spear St and Allen Rd with multi-use paths and on-road bicycle facilities as appropriate.

May, 2016: We have just launched a brand new website and are working to fully update our project pages. We will have more information posted shortly. In the meantime, if you have any questions, concerns, or suggestions, please reach out to our Community Technical Assistance Manager, Katelin Brewer-Colie.

Share your thoughts about walking and biking in South Burlington and what we can all do together to make it better!

Please check your e-mail for a link to activate your account.
• • • View All Suggestions

Vermonters spend about a quarter of their income on transportation, and almost half of... Read More

E-bikes: The Power Drill of Cycling

Tools are designed and created to make life better in one way or another. Sure,... Read More

Join South Burlington city staff, CCRPC and your neighbors on Wednesday, November 16th at 7:00 pm... Read More
• • •
View All Related News
Write A Blog Post
Do you like this page?
Tweet

Want to stay up to date with walk and bike issues in South Burlington? Sign up now!