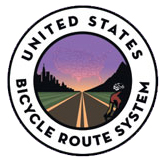 The Western New England Greenway is U.S. Bicycle Route 7. It is a multi-segment, multi-state bike route that links New York City and Montreal.

The corridor largely follows near U.S. Route 7 through the very Western portions of Connecticut, Massachusetts, and Vermont. It links with the East Coast Greenway at the Merritt Parkway near Norwalk, CT, at the Southern terminus, and with Quebec's Route Verte at the Northern terminus (Canadian border).