In 2017, we proposed and were granted permission to conduct several pilot projects recommended by Local Motion. These included painting of crosswalks, reduction in their length, signage to alert drivers of their passing through a densely-populated area, placement of temporary bollards, and tracking the compliance of drivers when pedestrians attempted to use crosswalks. These, along with speed studies by our police department informed further planning with town officials. 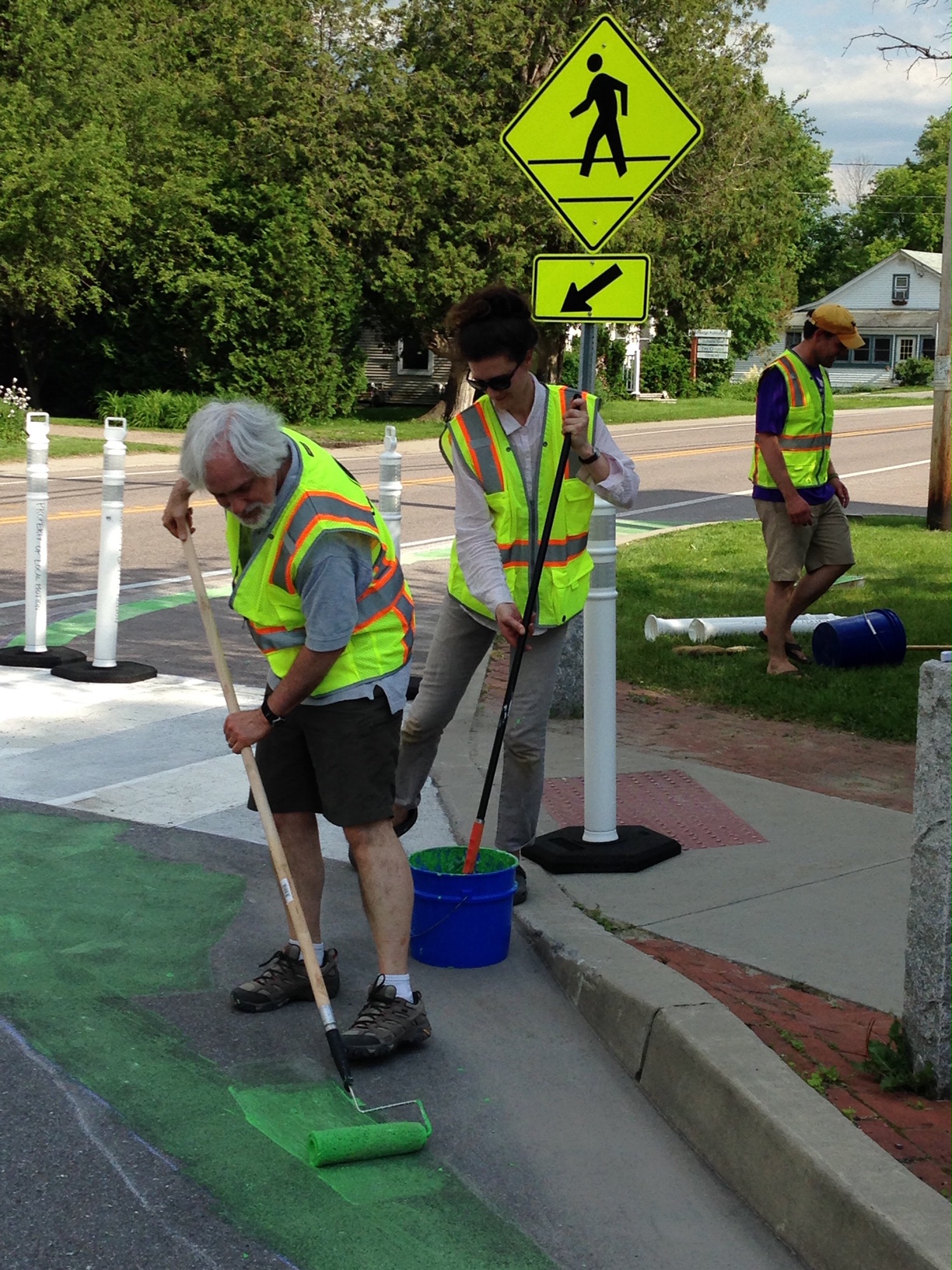 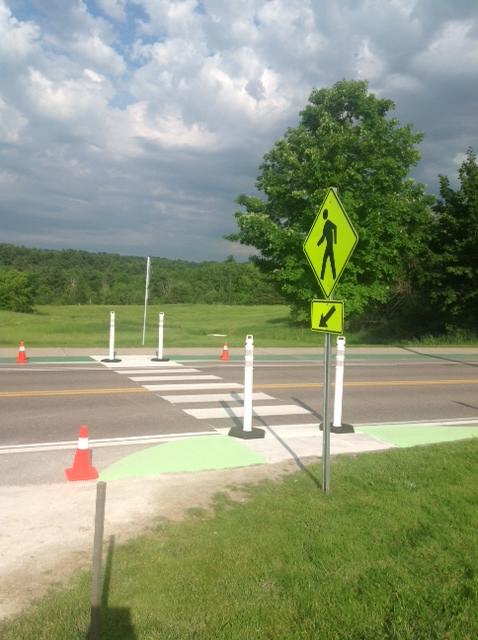 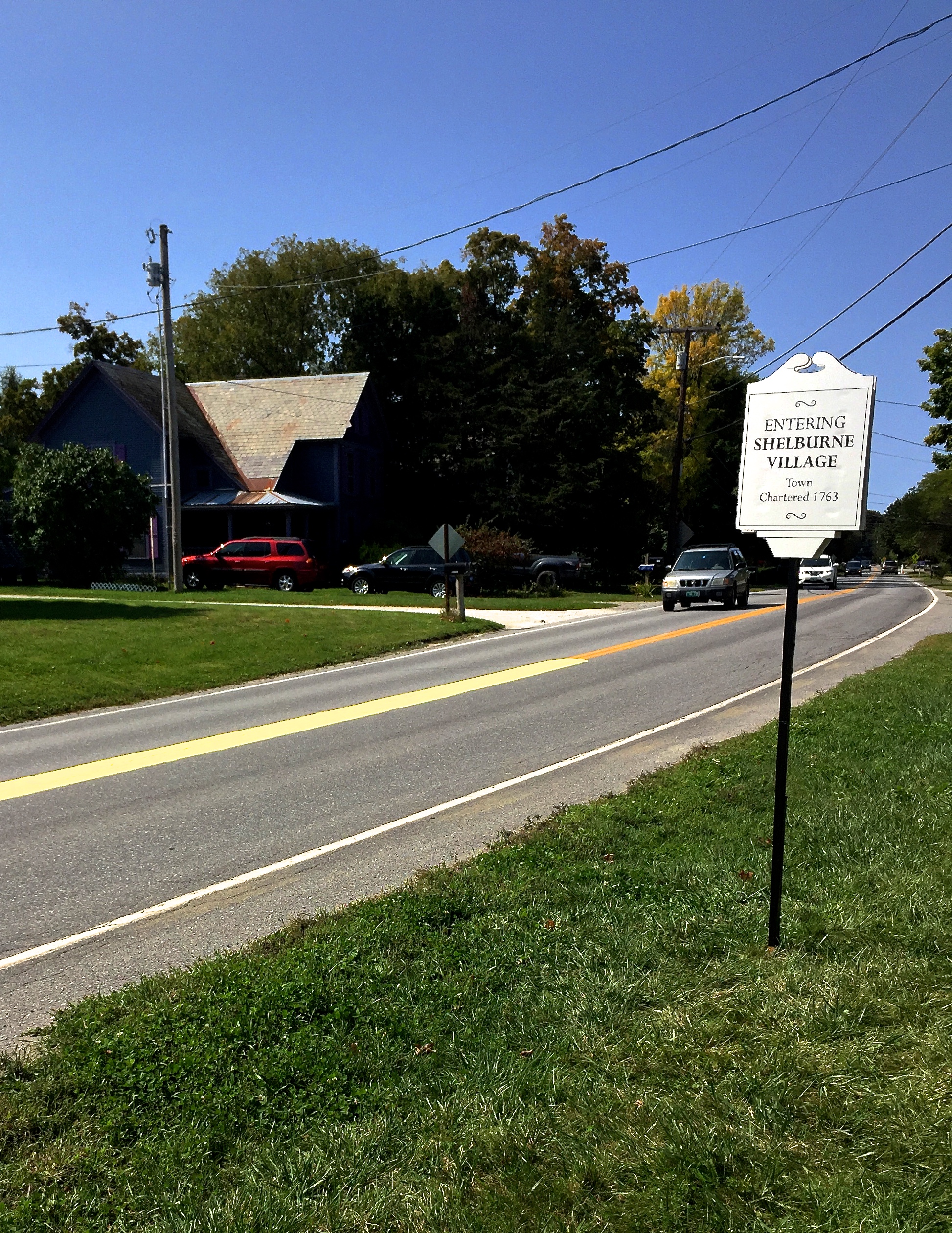 Falls Road runs through the historic district of the village, is a heavily trafficked artery, and runs both north/south and east/west.

Improvements have included painting of 10’ fog lines and installation of two crosswalks.  The north/south (“upper Falls”) stretch of this road sees the seasonal placement of bollards along a dangerous northern section of the road (where pedestrians walk on the same grade and within several feet of cars).  Additionally, we have successfully advocated for lowering the speed limit and the installation of radar speed feedback signs.  These inexpensive changes are intended to slow traffic and, we hope, create some measure of safer pedestrian travel. 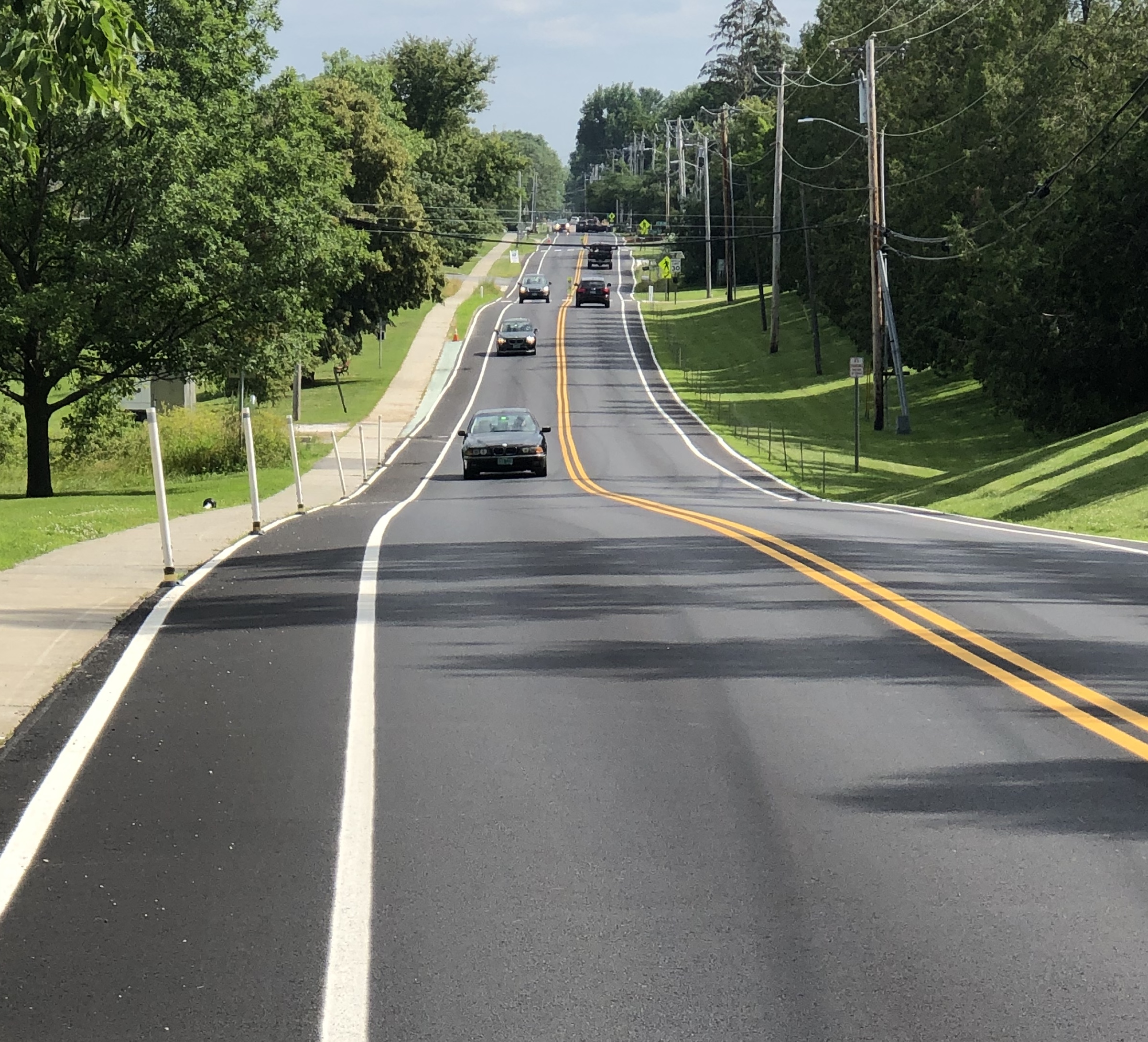 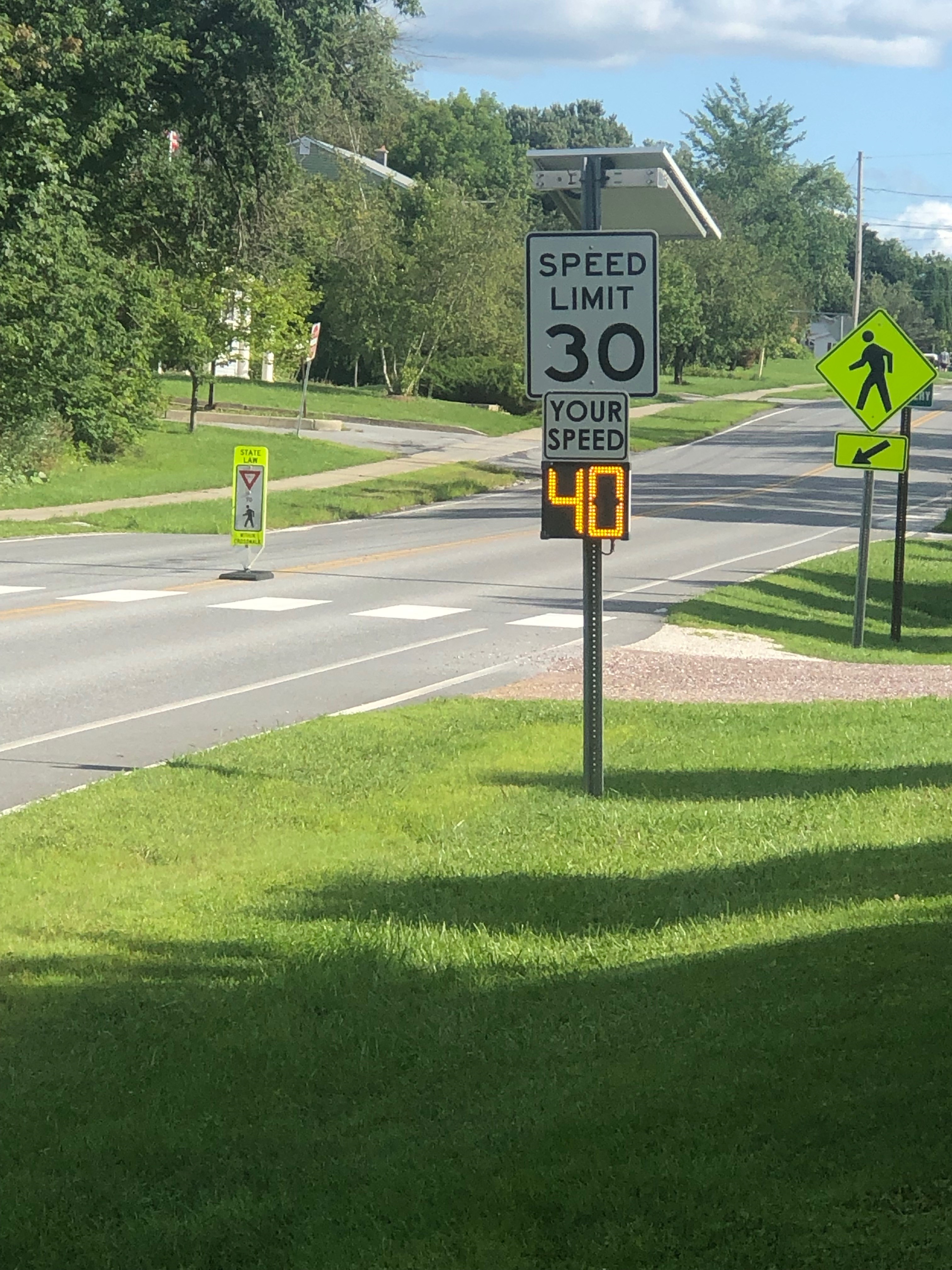 It is hoped these changes will lead to permanent improvements for protections, as this road continues to present significant risks to pedestrians and bicyclists: 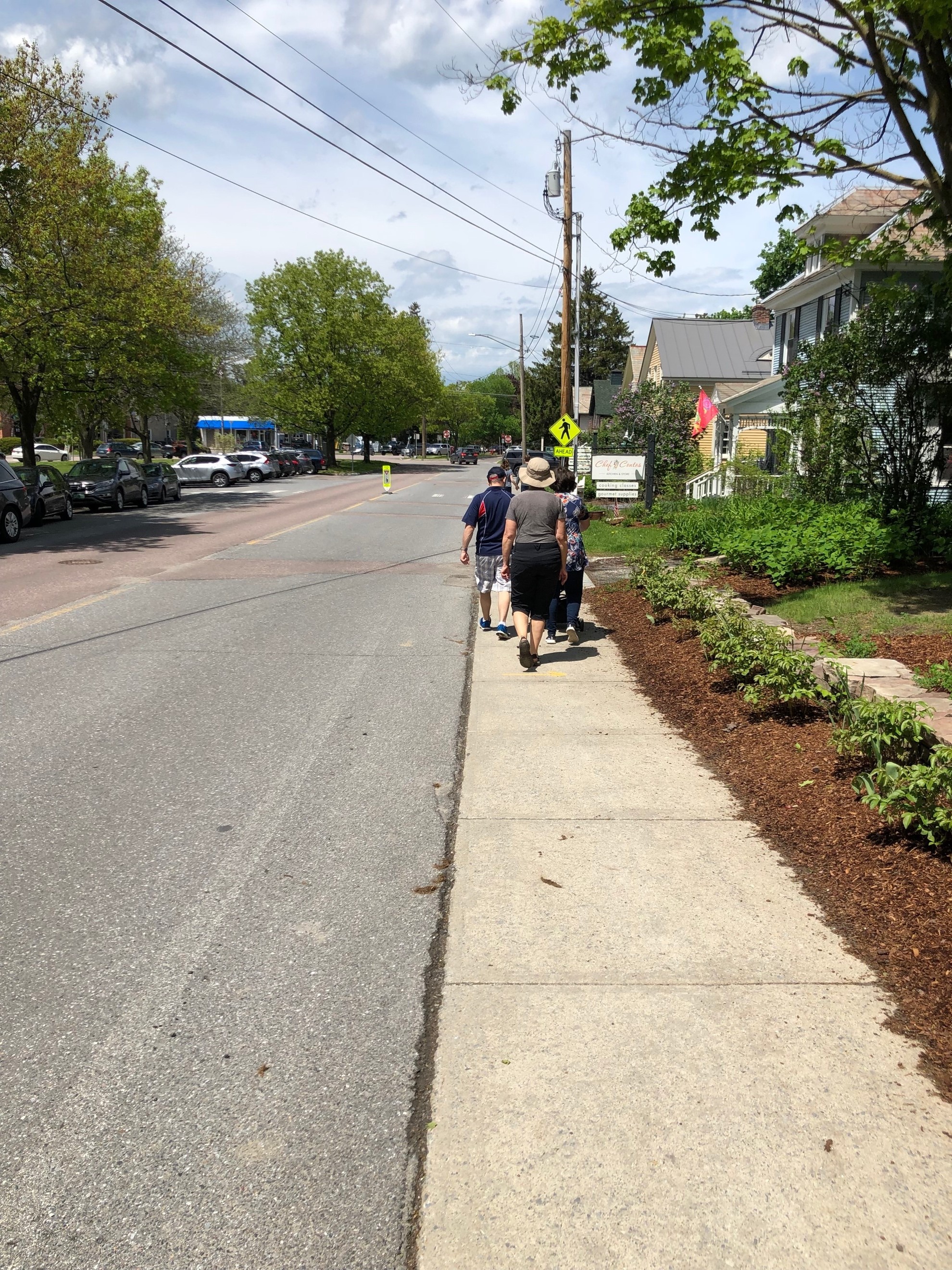 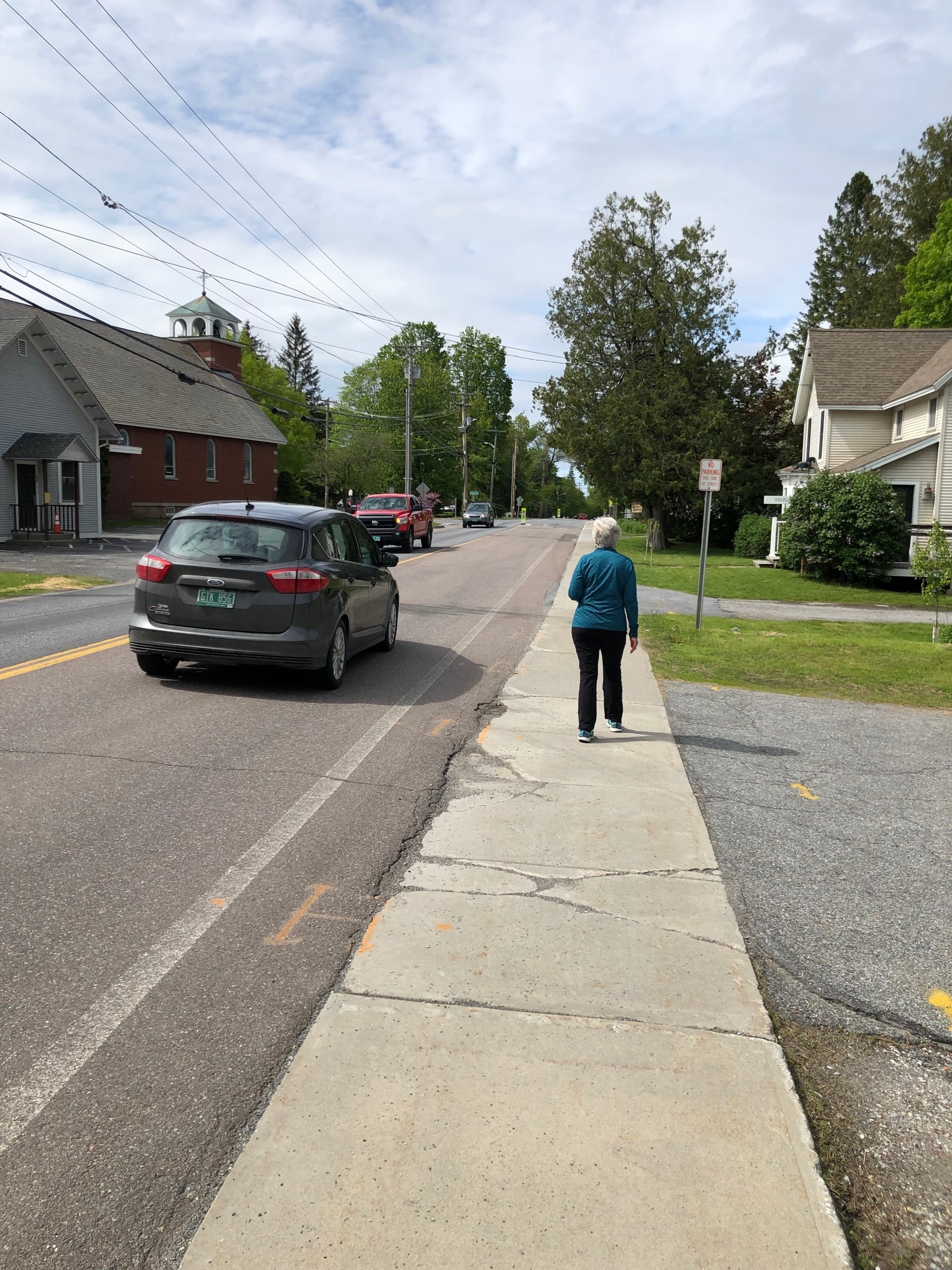 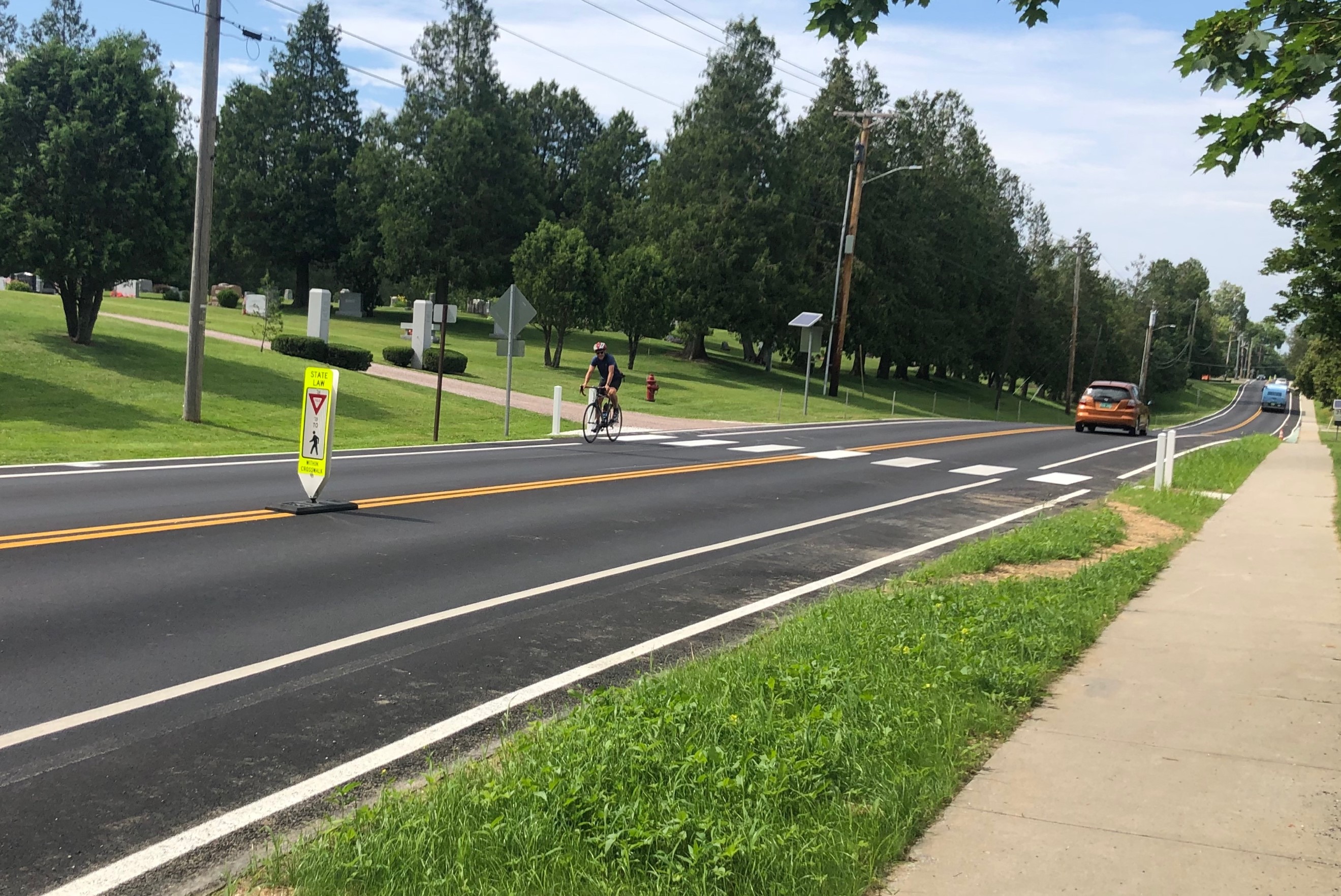 This new crosswalk now has proper signage and a landing pad on one side. It serves as a passage from a neighborhood both into the village center and towards the LaPlatte Nature trail at Shelburne Falls. Among needed improvements, are permanent bollards and a landing pad on the south side. 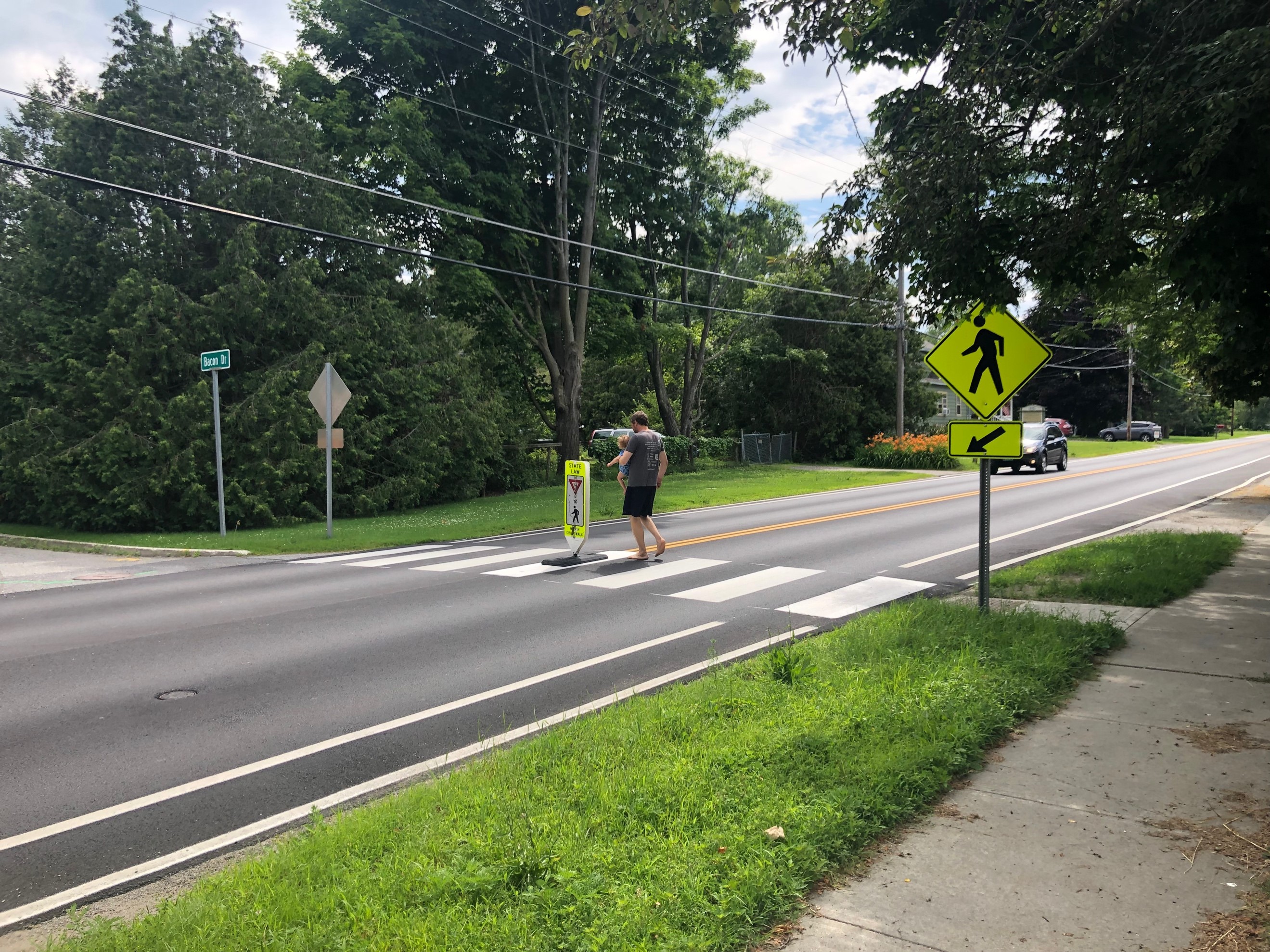 Marsett Road is a heavily trafficked, densely-populated residential village neighborhood and functions as an east-west artery off of Rt. 7. Several improvements to address speeding and pedestrian access have occurred in recent years.

This crosswalk joins several neighborhoods in the village and the growing businesses at the Village Green. A review of it with town officials suggests a study of its placement and other enhancements may be in order. 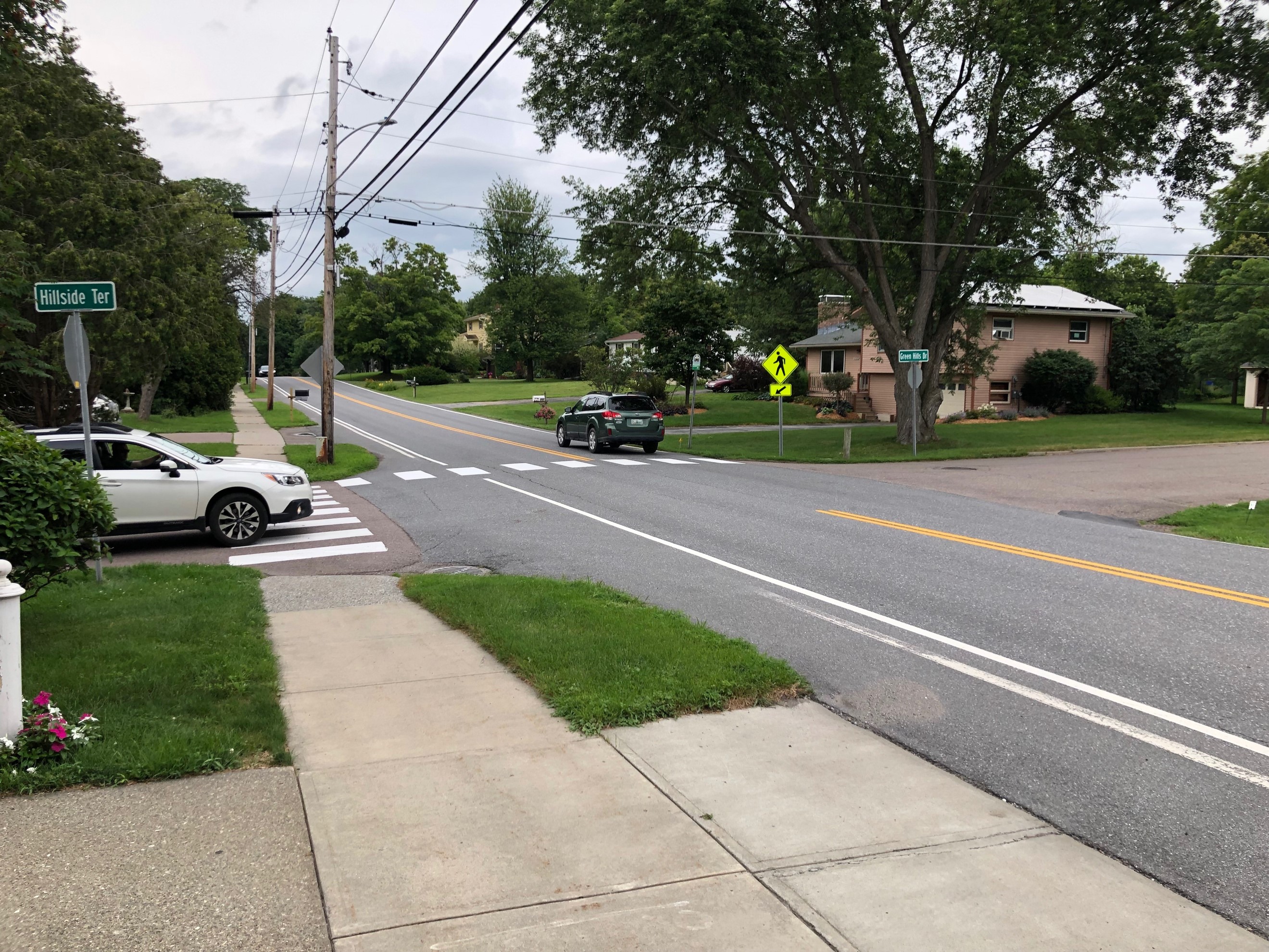 This intersection provides an important link between a number of densely populated developments and the village.  In 2020, the town installed a new crosswalk at this intersection, including signage in the green belts and landings pads.  Further improvements are needed to address the very wide turning radius at this intersection as well as mid-road crosswalk signage, as speeds and pedestrian visibility at this crosswalk continues to be a concern. 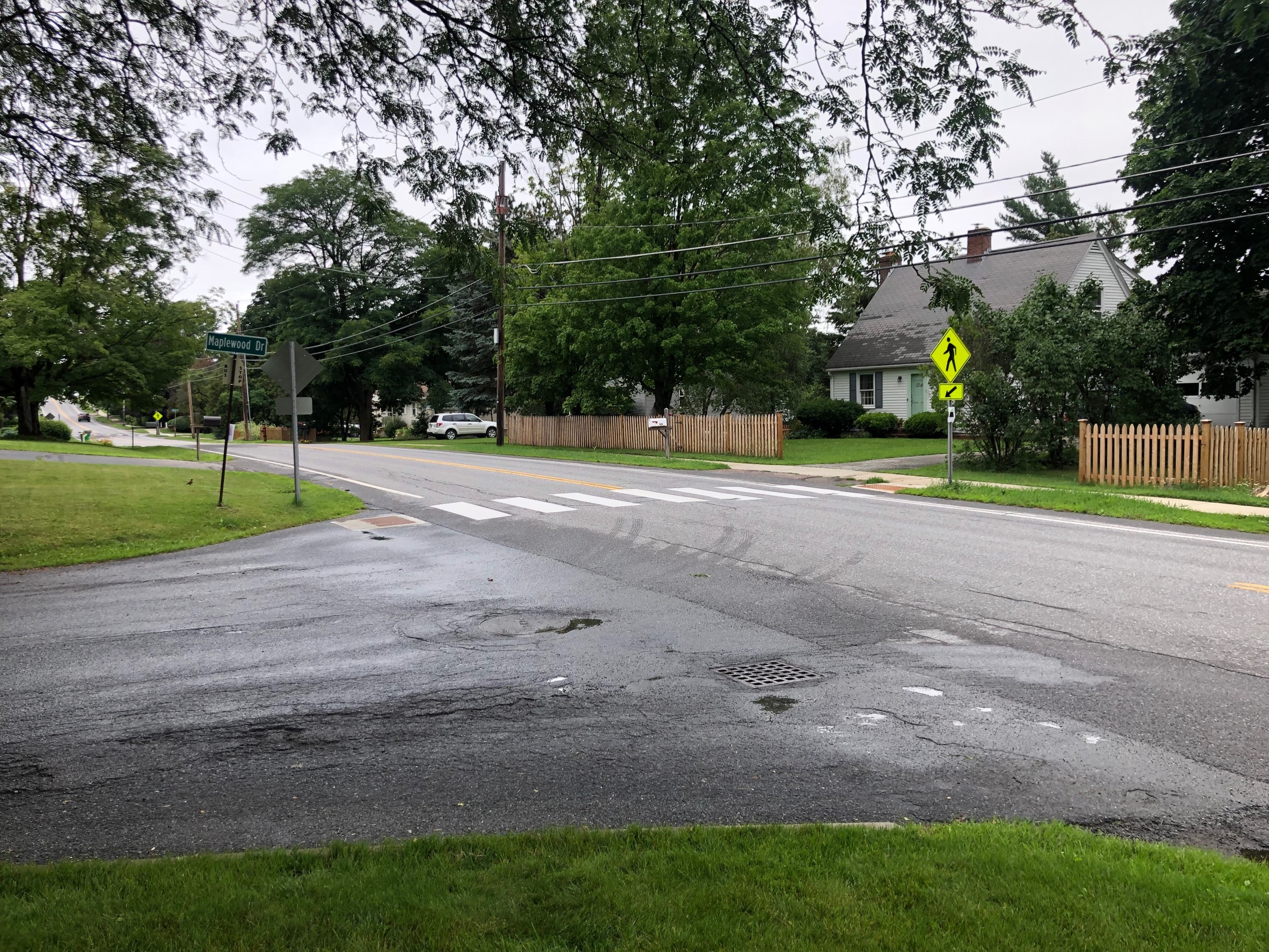 These have been placed by concerned families living on this street. 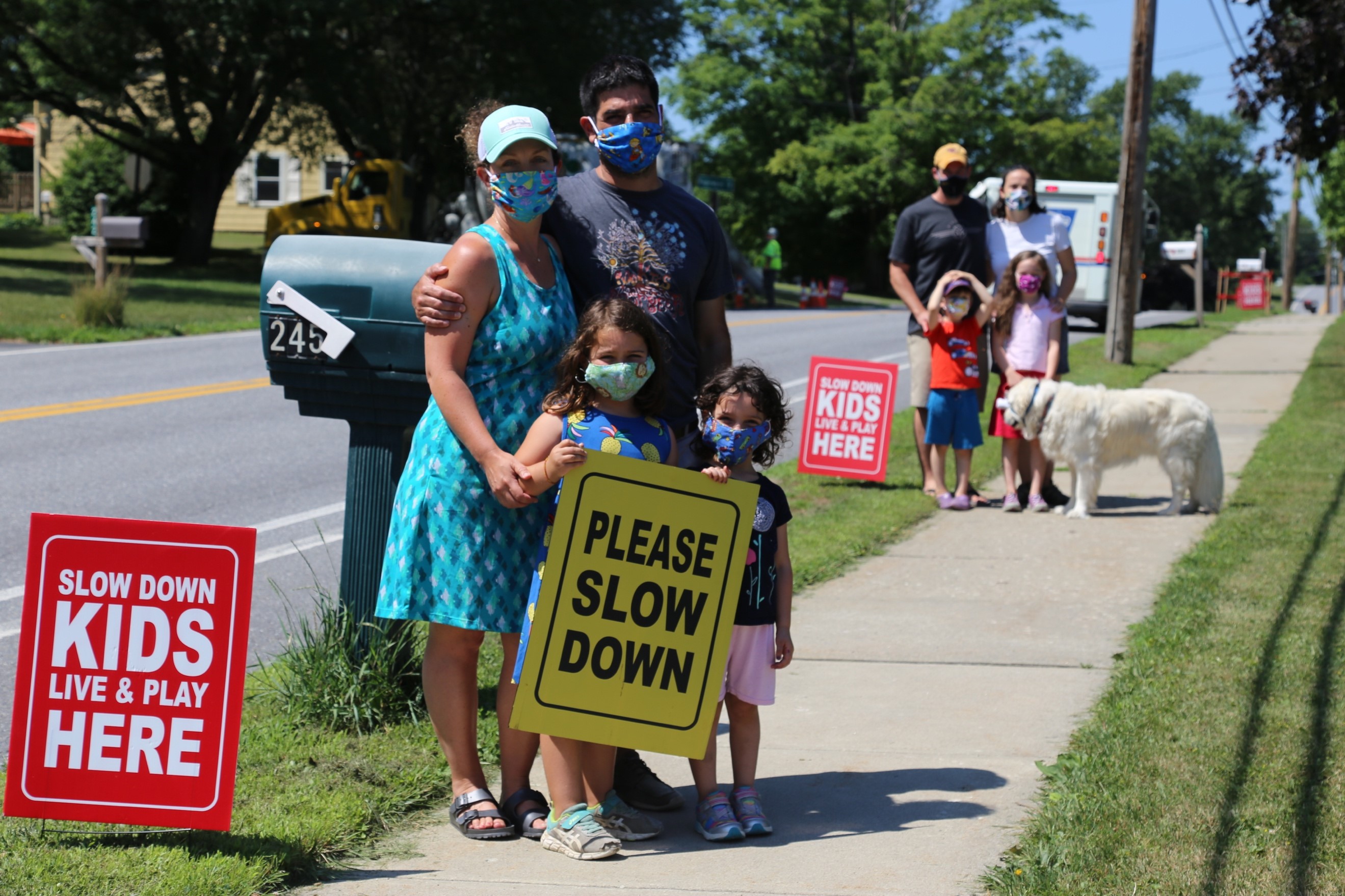 This was installed in 2020, heading east and close to the intersection with Rt. 7. 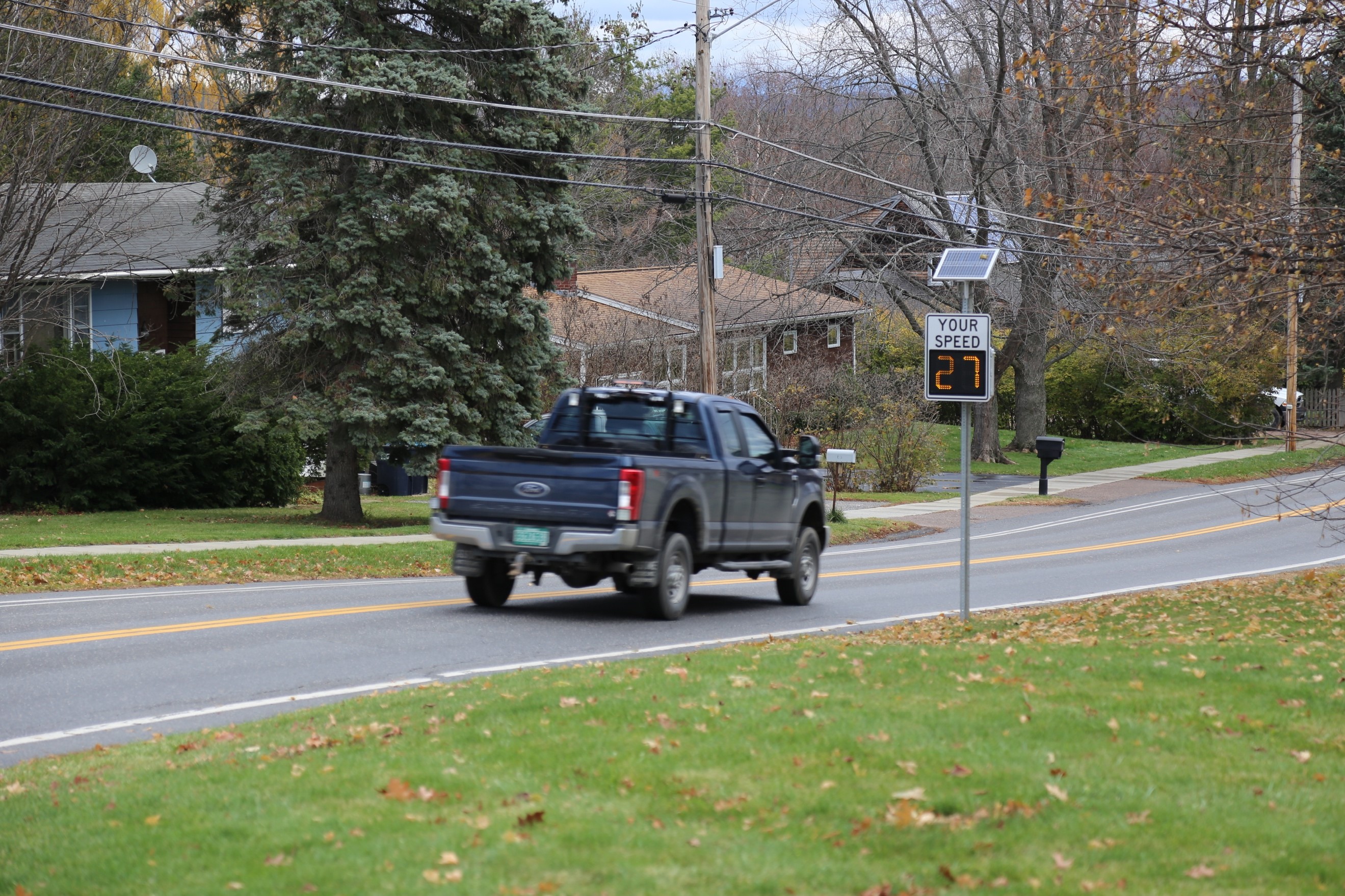 Mt. Philo Road is another busy artery in and out of the village and has also been prone to motorist speeding. The town agreed to reduce the speed limit on this road, closer to the village. 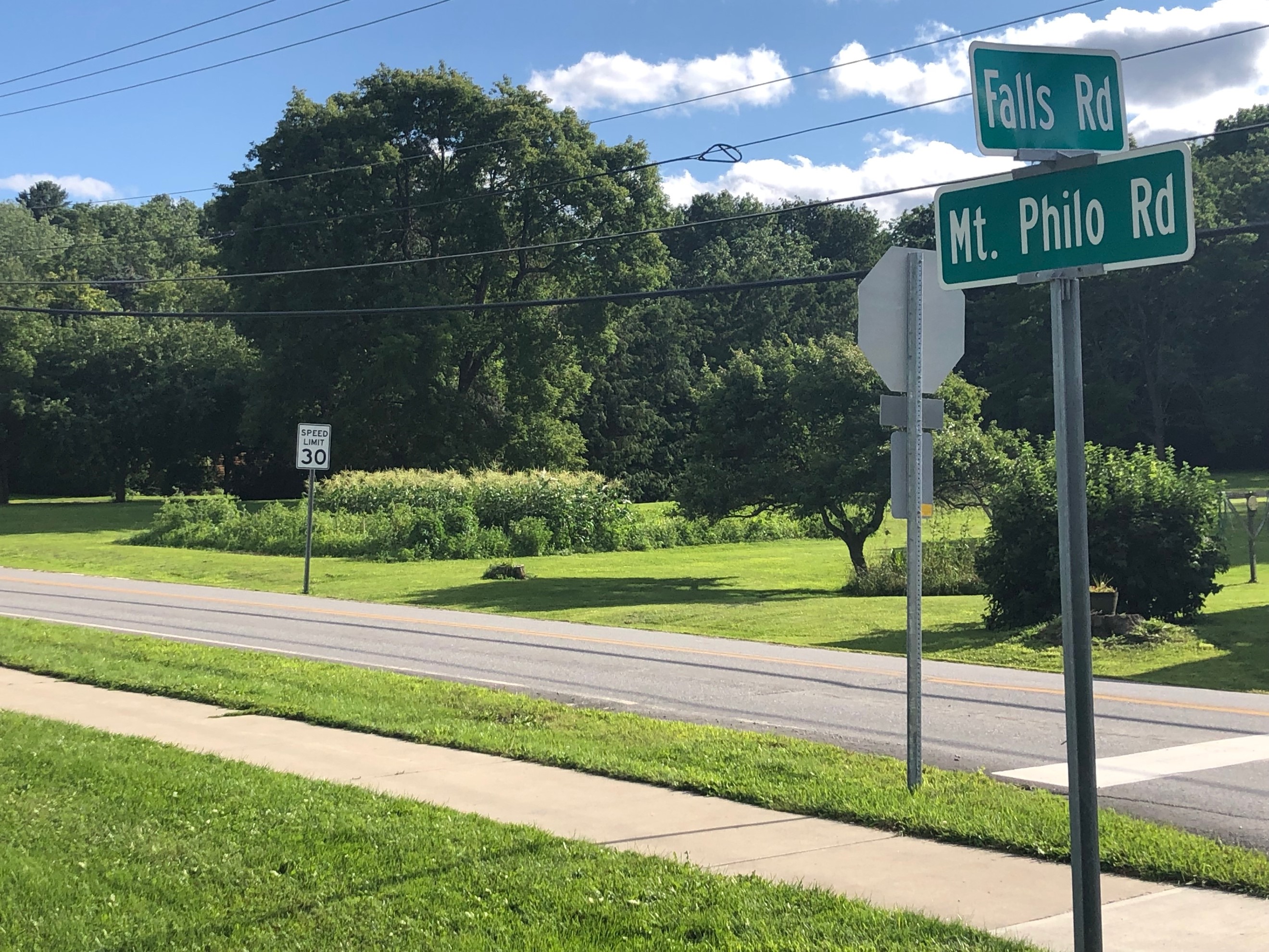