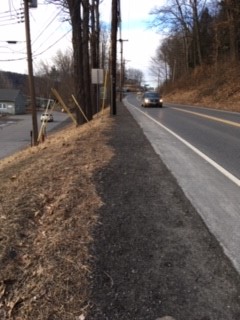 The Park Tool Trailhead Workstation that was recently installed at Brooks Library (adjacent to the bike rack) is a repair station built to withstand all weather conditions. The Workstation includes eight common tools for minor repairs and adjustments. The mounting post serves as a bike stand that gets both wheels off the ground.

BCAT (Brattleboro Coalition for Active Transportation) and Friends of Brooks Library combined resources to purchase the workstation and stand. Brattleboro Department of Public Works donated their time and tools to install it. This collaboration is exciting and significant, and we welcome local and touring bicyclists to make use of it! 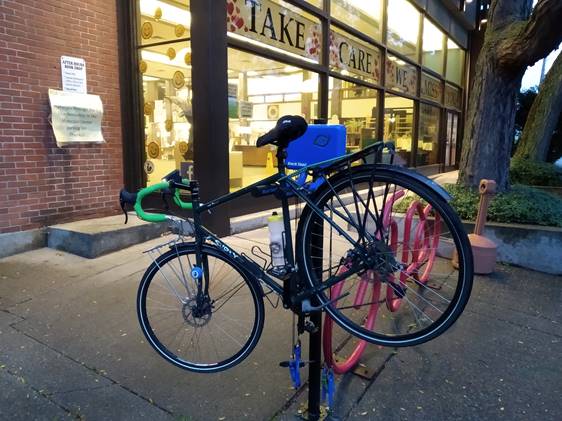 Second Snowplow
Often, especially after a large snowfall or successive snow storms, sidewalks leading to downtown and schools were not getting plowed for 2-3 days after a storm, leaving pedestrians to struggle through deep snow or walk in the busy street. The coalition learned that Brattleboro used to have 3 sidewalk snowplows at one time, but due to economic concerns had downsized to one. BCAT approached the Town Manager to ask how we might advocate for a second sidewalk plow to be added to the budget. With so many competing needs, it didn’t get in the budget. Plan B: The request for funding for a second sidewalk plow was added to the warding for Town Meeting. BCAT wrote emails to town meeting representatives explaining why this was a priority and how this purchase would affect property taxes. The coalition also wrote a letter to the editor in the newspaper. BCAT surveyed neighbors to get a sense of their support, both pro and con. We stood and spoke about the need at town meeting, and the item easily passed the vote. Brattleboro has purchased a used sidewalk snowplow at a reasonable, below budget price and it will be in use this winter!

Cedar Street Striping Process
A few BCAT members met with the DPW director about streets we felt could use fog line striping to slow traffic and provide a safer space for bicyclists. We also discussed whether traffic lanes could be narrowed on any of these streets to allow a wider shoulder. The director felt this would work on Cedar St., which is heavily used, especially by drivers from Route 30 and those wishing to take a short-cut avoid downtown. In spring 2018, Cedar St. was restriped. We now have a nice wide shoulder on the west side of the road for pedestrians and bicyclists, and a narrower travel lane for cars, which has been proven to slow traffic.

Putney Road Pedestrian Improvements
BCAT members worked with Town Officials to contact VTrans to express concerns about the dangers of walking on and crossing Putney Road, and to see whether any short term improvements could be made. VTRANS put gravel on the “Goat Path” on the west side of the road going up above the Marina entrance and put up a “caution pedestrians area” sign. A pedestrian crossing at the Hannafords Plaza light requires engineering. VTrans plans to study it for possible implementation during the summer of 2019. Long term solutions must wait until Putney Road is reconstructed with the addition of 3 roundabouts.

Parklet on Main Street
In August of 2018, a bike parklet was installed on Main Street, in the heart of downtown Brattleboro. Funding for the project was supplied from both the town, as well as donations via an online crowdfunding source. The parklet was purchased and transferred from Burlington to Brattleboro this summer with support from the Downtown Brattleboro Alliance and BCAT. The parklet addition on Main Street provides both residents and tourists with the support they need to make using alternative modes of transportation more convenient in their travels.

Melrose Bridge Sign
Western Ave in West Brattleboro poses a number of challenges for people wanting to travel that route. One of the biggest hurdles is the narrow Melrose Bridge just east of Academy School. In June, BCAT was successful in recommending to the town to place a sign before the eastbound lane notifying drivers not to pass cyclists on the bridge. 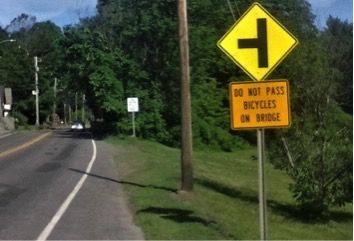 Covered Bike Parking at the Brattleboro Co-op
BCAT has been involved with discussions at the Brattleboro Food Co-op over the past few years about collaborating to provide shelter for the bike rack located across the store's parking lot driveway on the public Whetstone Pathway. The rack is used by the store's employees, consumers, and the general public and is conveniently located close to other downtown businesses. Currently, the town of Brattleboro does not have any covered bike parking. A recent downtown parking survey revealed that Brattleboro residents would like to see more parking amenities throughout town. BCAT hopes to work with the Brattleboro Co-op to find additional funding to provide sheltered bike parking. The amenity would demonstrate that the town and businesses in Brattleboro welcome and support bicyclists, and would make it possible for a greater number of people to choose alternative modes of transportation.

You can donate to fund the covered bike parking structure here! 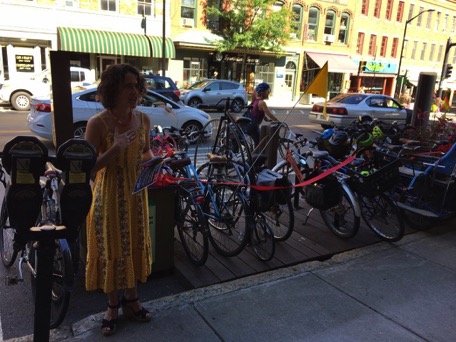 Western Ave from Exit 2 to Speno Court
BCAT is requesting the removal of parking on the North side of Western Ave from the Exit 2 interchange to Speno Court. With the removal of the 9' parking lane, we are asking that two 4 ½' bicycle lanes be installed, one on the north side of Western Ave and one on the south. The new travel pattern would then be 4 ½' bike lane, 12' travel lane, double-yellow line, 12' travel lane, 4 ½' bike lane, 9' parking lane.

The addition of these bike lanes would increase safety of pedestrians enormously. The impact of removing parking on one side of the Avenue seems small. For one, the town does not receive any revenue from this parking. For two, many of the businesses (Avenue Hair Design, Solar Hill, etc.) and residences have off-street parking of their own and do not use the on-street parking lane. The only entity that would be very impacted would be the Trinity Lutheran Church - on Sunday mornings. There would still be plenty of parking on the south side of the Avenue for them, and there is the RFP signal at the crosswalk right in front of the church.

The addition of the bike lanes would be the town's first move in almost a decade toward creating continuous bike lanes from West Brattleboro to downtown.  Though BCAT would like to see this change extend all the way downtown, the removal of the parking lane becomes much more problematic to businesses and residences starting at the Avenue Grocery location.
Stay Informed