South Hero's South Street is currently under construction. Ultimately, the project will span South Street from between Martin Rd. and Landon Rd., a total distance of about 1.3 miles.  The construction will take place in two phases. Phase 1 - will take place from Martin Rd to West Shore Rd. Phase 2 - will be taking place from West Shore Rd. to Landon Rd.  Expected completion date for Phase 1 is the end of July. Expected construction completion date of Phase 2 is late summer/early fall. Construction and detours are a bummer for biking but ultimately, the work that is being done now is going to make South Shore so much more accessible and comfortable for everyone (regardless of their mode of transportation) in the future. So thank you for your understanding and patience!

It is important to note that this information is being provided as a convenience and is intended for reference only.  Local Motion assumes no responsibility or liability for any loss or damage suffered as a result of reliance on or misuse of the information. For more information on the construction taking place, please visit www.southherovt.org/selectboard. 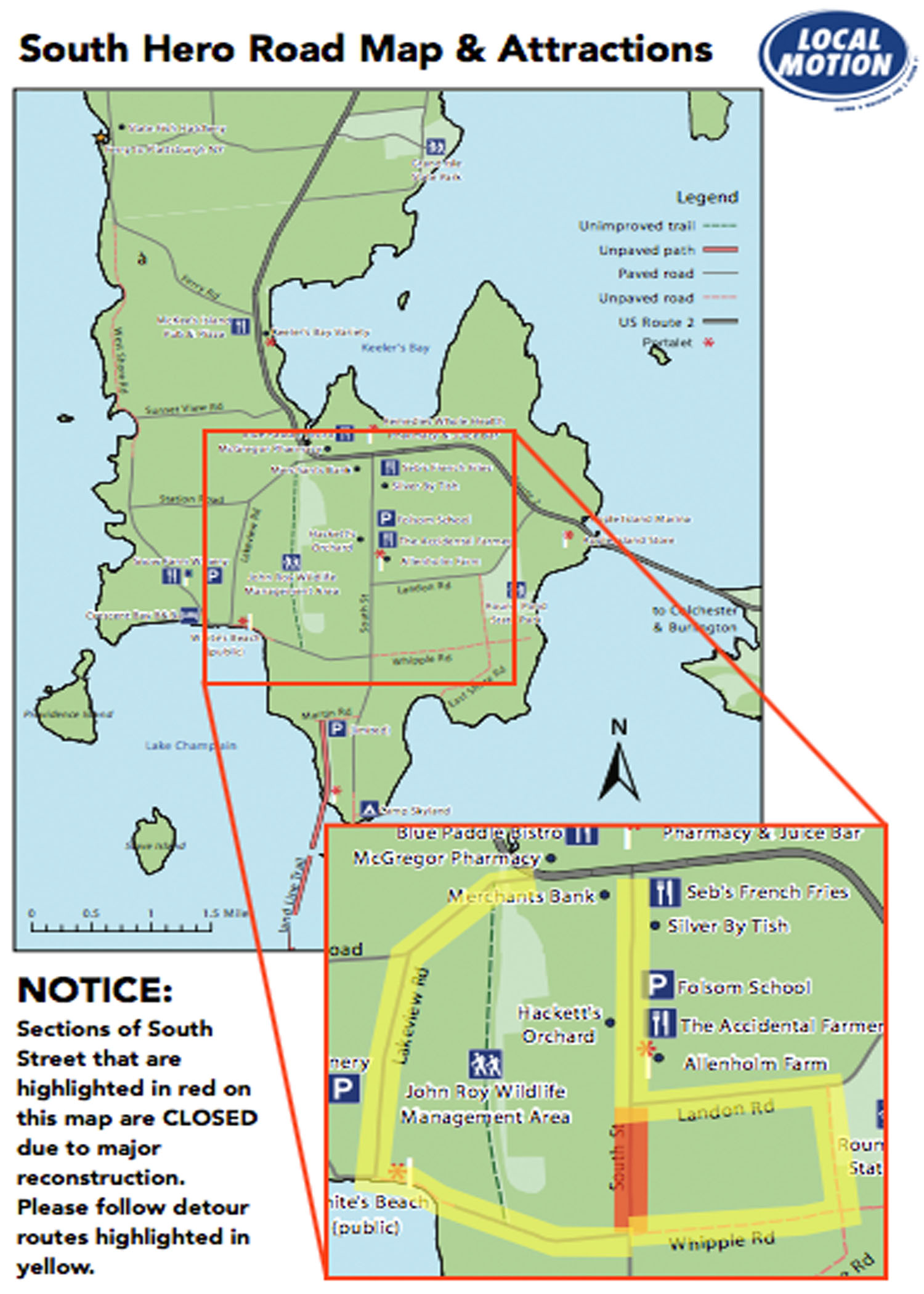 South Street in South Hero is completely closed to through vehicle traffic between Landon Road and the Whipple/West Shore intersection during week days. South Street, when open, is passable by bike but sections are rough. Detours have been made to direct folks to East Shore Road via Whipple and Landon roads. We've made up a map of these detours, but please be aware that this map reflects what we've been told and may not 100% accurately reflect route availability.

When construction begins between West Shore Rd. and Landon Rd, that section of Shore Street will be closed to traffic during daylight hours. South Street will open to traffic for evenings and weekends. During its closure, a detour will be provided directing people out Whipple Rd. to East Shore Rd. or from West Shore Rd. to Lakeview Rd.

Work began on April 25th on the section from Martin Rd. to West Shore Rd.

The Burlington Department of Parks, Recreation & Waterfront (BPRW) is leading a full rehabilitation of the Burlington Greenway (informally known as the Lakeshore Bike Path).  Phase 1 of the project—from the ECHO Center to North Beach—was completed in December 2016.  Phase 2 of the project—from North Beach to the Winooski River bridge—will run from June through December of 2017.

Local Motion is working closely with BPRW and with other city officials to advise on detour design and management while the path is under construction.  We will post updates on both the status of path construction and on Local Motion's work related to construction detour planning on this page on a regular basis.  For more detailed updates on construction, visit BPRW's Phase 2 Updates page.

Greenway closed between North Beach and Shore Ave. For the next two weeks (weather dependent) the Burlington Greenway will be closed to traffic while it's being paved. For the duration of this construction, please follow detour signs. Path is anticipated to back open in time for the Vermont City Marathon on May 27th.

Crunch Time! The construction crews are hurrying to pave the remaining 1 1/4 mile of the burlington greenway before the 2017 construction season officially comes to a close. The current tentitive schedule follows:

The Greenway is expected to be fully open for the Burlington City Marathon on Sunday, May 27th, 2017

A new tentative schedule is out!

Making Progress! Phase 2a, from Shore Road to the Winooski River is OPEN and work on Phase 2b, North Beach Campground to Shore Road has begun!

One of the updates we've been waiting for! The ramp down to North Beach has been paved! Bye, bye bumps and scrapes and loose gravel! 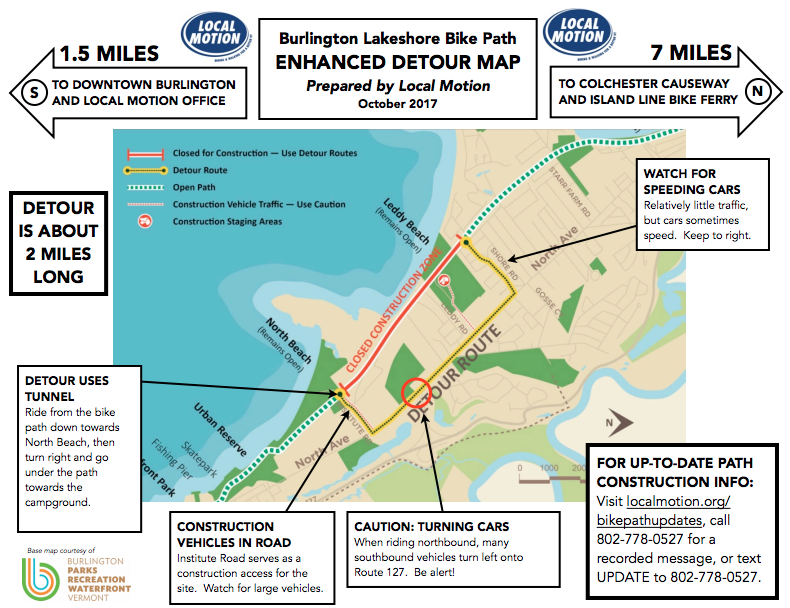 We're doing a happy little dance - Phase 2a of the project is officially complete and can't wait to get out there and experience it! Phase 2b construction - from North Beach to Leddy Park has begun. It is expected that this construction will last through the end of the year. BPRW has released the official detour map over on their site and we've put together another one of our enhanced detour maps. Enhance detour signs are at the printers and soon to be deployed.

Bridge access is once again open and ready to be ridden!

Winooski Bridge Access is open! As promised, access to the Winooski River Bridge is open for the weekend. Shoulder works still needs to be completed along this section, but won't happen until next week - so in the meantime, get out there and enjoy it!

Winooski Bridge Closure. The section between north Ave Extension to Winooski Bridge has been been reduced to a single, flagged lane in preparation for shoulder work.

Permits Approved! Pavement scheduled to begin on Sept. 12th. Pay extra attention at the intersections with North Ave Extension, Starr Farm Road and Staniford Road as gravel subbase will be making it's way to the path via these routes.

Dig! Dig! Dig! The Project scientist and VT DEC have given the go-ahead for full bike-path work to be completed between Staniford Road and Northshore. Excavation on this section had been limited until a plant inventory had been completed ensuring that the location of any endangered, rare or threatened species was known and all efforts to protect them were taken.

More signage! BPRW has added more detour signs as well as a number of safety banners along the detour. YAY! However, we have been hearing rumors of an individual in a blue SUV who has been taking down signage as well as harassing cyclists along the detour. The police are aware, but need a licence plate (or even better a video!) before they can take any sort of action. So if you're out and about and come across this individual, let us know. As always, even more information can be found on the BPRW's Phase 2 Updates page.

Progress! Progress!  Slope work is nearly complete between Shore and Staniford Roads. Simultaneously, asphalt removal, tree protection, erosion control and prep work for grading is all taking place between North Shore to North Avenue Extension. The area in between is awaiting a visit from the Dept. of Environmental Conservation to make sure that construction activities will not detrimentally impact the vegetation along this section of the bike path. For a complete look at all the details, please visit visit BPRW's Phase 2 Updates page.

Excavation to begin next week! The necessary vegetation has been cleared and some asphalt removal and initial rough grading has been completed. It has been brought to BPRW and Local Motion's attention that individuals are choosing to ride the bike path instead of using the detour. The detour has been set up for rider's safety and it is important, especially now as excavation is to begin in the coming days, that all bike path users are in fact using and following the detour. For even more details, including an update on the plants along the construction side and a sneak peek at the new pause place concepts, visit BPRW's Phase 2 Updates page.

Local Motion has added additional signage to the bike path detour. A combination of messages of encouragement, safety tips, "you are here" maps and directional/way-finding assistance, we hope these signs will help people navigate the detour!

BPRW has released the official detour map. Local Motion has updated it slightly to further lay out and identify the details and intricacies of the detour. At this time, Local Motion believes that the detour will be in effect until construction of this section of path is completed sometime in the coming fall.

Construction starts the week of June 19.  What section will be the first to be closed for construction is currently being negotiated with the contractor.  The only thing that is certain is that it will be in the northern section of the path (between North Beach and the Winooski River).  Local Motion is advocating for construction phasing that minimizes impacts on path users, particularly in the high tourist season.

At least a portion of the detour will of necessity send bicyclists out onto North Avenue. The exact detour route is still being determined. Local Motion is evaluating the detour route carefully and working with the city to make it as safe and as direct as possible.  Again, we will share details as soon as they are available.

The Winooski River bridge will remain open until further notice.  At some point, the bridge will need to be closed for three to five days while the segment of path between North Avenue Extension and the bridge is repaved. Local Motion is advocating for holding off on this portion of the construction process until after Labor Day, when tourist traffic drops off and the Island Line Bike Ferry goes to weekend-only service.  Details to follow.

Staging for construction on Phase 2 will begin during the week of June 12.  The path will remain open for the week, but path users should expect to encounter vehicles and personnel engaged in survey work and other preparations.

Local Motion has submitted extensive comments to BPRW regarding detour routing, signage, and marketing.  We are meeting with BPRW staff next week to review those recommendations.

Local Motion has begun discussions with the Burlington Department of Parks, Recreation, and Waterfront on detour plans for the bike path during this summer's construction season.  Stay tuned for updates!