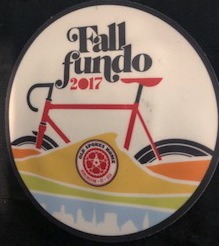 On September 30th I participated in the Fall Fundo - Old Spokes Home fundraising ride. There were three possible distance participants could choose from -  a 10 mile ride, 30 mile ride or 60 mile ride. I originally opted for the 30 mile ride but then at the last minute decided on the 60 mile ride instead. I was inspired by a friend who told me she did the ride last year and that the 60 mile route was beautiful. Also, recently, I have been doing some long road bike rides, including my first century, so I thought I could finish the 60 mile course.

The morning of the event was cool and cloudy with a possibility of rain. I was, without a doubt the most rain ready of the 60 mile riders. I had rain pants, waterproof socks, and a even a waterproof hat. Earlier in the summer I took a less prepared ride and got soaked, so now I come prepared! This time, I was, you might say overdressed and had to strip off most of my gear as the day warmed up and it did not rain. There were great snacks all along the route, and I ate much more than I typically do on a ride. Even prior to the ride, the organizers we're feeding us - I had a chocolate croissant before the ride even started which resulted in getting chocolate all over my gloves and my face.

It was a motley group that set out for the 60 mile ride. Some folks had high-end bikes and others rode old mountain bikes. Some riders were dressed in cotton shorts and others were wearing Lycra tights. As we set off from Burlington to Winooski and then headed to Colchester, I quickly dropped into last place and lost sight of the group. I knew I was a slow rider, but looking at the group gathered at Old Spokes, I thought that I would be in the center of the pack, if not in the front. Though I was determined to ride at my own pace, and not burn out, being so far behind was a blow to my ego. Sam, who drove the support vehicle was encouraging and that helped.

At the first support station I told the staff there that I had already lapped the main group and was riding the route twice. They laughed. I had some pie and then set off with the sweeper, a guy named Will, who had waited for me. A sweeper rides last and makes sure the slow riders are OK. It was nice riding with someone else, although he had to constantly wait for me. We talked about the difference between amateurs and professionals in the world of biking, and how much stronger the professionals are. I mentioned my idea of an Olympic pentathlon which would include any five events of your choosing. I'm convince that most people could be in the top 100 in the world if they could pick their events. I might, for example compete in pesto making, telling stories to children, swimming, bike riding and knowledge of 19th Century English Literature.

I usually ride alone but it was nice to have someone to talk to. As I plodded along, I was sure I would finish but I did not want to be so late that I missed the barbecue. It was a gray day, but the countryside is always beautiful and I got to ride on some roads I have never been on before. Because we took mostly dirt roads, and were far from Burlington, the traffic was light.

In Cambridge, Will and I caught up with a guy who was riding a tall bike, one frame attached on top of another. I hung out for a while and then headed out on my own. I caught up with and passed a guy and then saw two young women ahead. I was able to catch up with them and stay just behind them. When I got to the final support station, I encountered a larger group of riders. It was nice to feel that my slow and steady progress had been rewarded.

For the last 20 miles of the ride, I rode with a group of six riders, two of whom are old friends. I felt pretty good as we rode back into Burlington. A hundred people or so were gathered in a parking lot near Old Spokes Home. I sat with some friends and had a beer and some food. The sun was shining and music was in the air. I am not one that enjoys most group activities, but I was happy to be part of the crowd on that day. Congratulations to Old Spokes Home on a very successful Fall Fundo - I already can't wait until next year's!