I still experience road rage  from time to time, but I have not chased anyone down in a while.  Usually I try to just let the feeling go.

This story helps me --

Two zen  monks, a young man and an old master,  come across a young woman who is dressed very formally and wearing delicate shoes.  She is about to cross a muddy stream.  The master offers to carry the young woman across the stream, and she accepts.  The younger monk is outraged, because monks at that time were not supposed to have contact with women.  Half an hour later the younger monk said, "I can't believe that you picked up that young woman."  The older monk said, "I put her down half an hour ago but you are still carrying her."

Sometimes, half an hour after an incident, I find myself indulging in revenge fantasies. This is a waste of time. 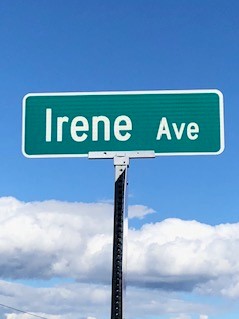 When I am happy, songs come into my head, or rather fragments of songs.  Sometimes I sing out loud,  sometimes not.  Once in a while a place reminds me of a song.  There is an Irene Avenue in Essex and when I pass by I often sing a few verses of 'Goodnight Irene,' which was written by Huddie Ledbetter, the great American folk song  writer. He also recorded another song that comes to me when I am riding called 'In the Pines'. Other songs include, 'Delta Dawn' and two songs from Little Feat, 'Whenever I'm in the World' and 'Dixie Chicken.' I first came across the band Little Feat when I was living in the East End of London.  I also like to sing My Life Flows On'.  I learned it 40 years ago when I was a member of the Green Mountain Volunteers, a contra dance performing group.  In the past couple of weeks, 'Down by the Bay' has been the song going through my head.  I also sing  'Willoughby Wallaby Woo.'  The song begins like this -

Willoughby wallaby woo, an elephant sat on you,

Willoughby wallaby whee, an elephant sat on me.

Then you put in a person's name -

On a ride back from Montpelier, I sang the song with names from the time of the American Revolutionary War.

An elephant sat on Jefferson,

An elephant sat on Hamilton.

I think that may have come up because I had just read a review of 'These Truths' a book about American history by Jill Lapore.

Often only sing fragments of the songs, or just the chorus. Recently I went to a friend's birthday party.  It was a singing party led by Robert Resnik and Brian Perkins. Audience members selected items from 'The American Songbook' and we sang them together.  I was amazed at how many I knew.

In a few places in Vermont there have been improvements in the biking infrastructure. One of the more striking  examples is the Barre-Montpelier Road.  For part of the road there are clearly marked biked lanes and new pavement.  Sadly this is not true for the entire route.  It is like being in a kind of bike utopia for a while, only to return to the real world where bikes are an afterthought at best.  The same kind of thing happens on Route 15 in Essex Junction.  Heading to Essex Junction from Winooski I can take a back way through Saint Michael's College and Fort Ethan Allen, but the section of Route 15 between Suzie Wilson Road and West Street Extension remains problematical. If I am going straight, I have to ride between two lanes of traffic.  The same thing happens on Shelburne Road heading South from Burlington.  There is no provision for bikes when the road splits into a right turn only lane and a lane for going straight. The list could go on and on, but those are two extreme examples.

Earlier this year a discussion group I participate in read Middlemarch by George Eliot. Here is a famous passage from that book --

“Your pier-glass or extensive surface of polished steel made to be rubbed by a housemaid, will be minutely and multitudinously scratched in all directions; but place now against it a lighted candle as a centre of illumination, and lo! The scratches will seem to arrange themselves in a fine series of concentric circles round the little sun. It is demonstrable that the scratches are going everywhere impartially, and it is only your candle which produces the flattering illusion of a concentric arrangement, its light falling with an exclusive optical selection. These things are a parable. The scratches are events, and the candle is the egoism of any person now absent—of Miss Vincy, for example.” (Chapter 27, pp. 194-5)

In much the same way, any activity I engage in passionately can pull into its gravitational field other areas of my life.  For example, if I made bike riding the center of my life, I might end up working in the field, and socializing more with bike folks. I might enter races but that would mean getting a car to transport my bike. The more time one devotes to one's ruling passion, the less time there is for other things.  Bikes are certainly better than  gambling, but obsessive following of any passion means sacrificing other areas of life.  In an area like biking or meditation, or storytelling, there is always more to learn, always more to explore.  I recently read an article about a young coach in the NFL who devotes  every waking hour to his job.  He is obsessed with winning the Super Bowl.  Sadly for him, luck plays a large part in sports, and that is something no amount of work can affect.

I have been forced to chose a balanced lifestyle,  because I am not really good at any one thing. I am pretty good at lots of things, and right now that is just fine.  At one point I thought that I could make a career at performance art, but that did not happen.  Instead I make my living in many different fields.  As storytelling for children has stopped being viable, I have turned to teaching bike classes and teaching swimming.

I am grateful that bikes and bicycle riding is such an important part of my life, but also blessed to have other thing that  give me pleasure and satisfaction.