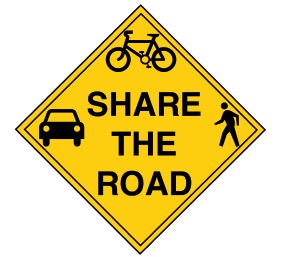 Last month, I rode my bike from Winooski to the Brownell Library in Essex Junction. Between Suzie Wilson Road and West Street Extension, Route 15 is divided into two lanes and the right lane must turn right. That means that if I want to go straight I have to get into the left lane. Bikes in the middle of the road make drivers nervous and angry, even if that is the place they should legally be..

A few minutes after I got into the left lane, a man in a black pickup truck honked at me before passing. There was no need for him to do that, I was just inside the white line, giving him plenty of room to pass. It pissed me off and I felt the heat of anger rise inside of me. There was a moment when I considered letting it go but when he pulled into the Harley-Davison parking lot I followed him. He was walking across the parking lot when I yelled, "No need to honk sir, I was in the correct lane for going straight." He started yelling something in return, but I did not hear him because I turned around and continued on my way. I never got off my bike. As I approached the Five Corners, I felt a little paranoid that he might be following me, but that did not happen. I was glad I yelled at him, even though I know I probably didn't accomplish anything in the ongoing dialogue between drivers and bikers. Indulging in anger feels good even if it is not the wisest course of action.

I have been thinking about why I am quicker to anger and more aggressive on my bicycle than I am in the rest of my life. If someone cut in front of me in the line at City Market, I would not yell at them the way I did at the guy in the pick-up truck. I might mildly protest, but I would assume that the person had made a mistake, or didn't see me.

I wonder if the bright colors I wear when I am riding, combined with the street environment are a factor in my transformation from a mild mannered guy into one who has a temper. If I am not riding, I usually dress in black, white, brown and gray. There is some color in my wardrobe but much of it is subdued. What we wear affects our personality and bike gear shouts, "Look at me, pay attention, I am here on the road with you and I have the same rights as a car!" Or at least that is what I want my gear to say. The problem with both honks and clothing is that it can have different meanings to different people. For a driver, a honk can mean, "Watch out, cyclist, I am here and I don't want to hit you!" For the bicycle rider, who by and large knows that the car is behind them, the honk is usually interpreted to mean, "Get the hell out of my way!"

Sometimes, when I am riding my bike, I have of flash of understanding, a new insight. On a Sunday ride up to South Hero, I felt what it would be like to hold ideas more lightly. Especially ideas about who I am and how I should live my life and thoughts about what other people are like. Sometimes I make harsh judgements, and those judgements affect how I treat myself and others. Recently I have had some unpleasant encounters with drivers, like the one described above. On the radio I heard a therapist who suggests that dumb and happy is a good way to deal with obnoxious people. On August 29th I was riding into Milton on Middle Road when someone behind me honked before passing me. When the driver turned into Russell Circle I followed and found her in her driveway exiting her car. There was a certain thrill in tracking her down on the side street, but not the same thrill I would have felt if I had intended to yell at her. I stopped and yelled, "Thanks for the friendly honk!" She smiled and said, "I wanted you to know I was behind you." I did know she was behind me, and so the honk was redundant. I didn't think that a long explanation was in order, and at least the encounter left both of us feeling OK. It was not completely satisfying, but it was better than the interaction with the guy in the black pickup truck.

In general a smile and a wave is better than giving someone the finger, but it is hard not to respond negatively when interacting with inconsiderate drivers. What makes bike riders upset is when drivers yell or honk even when we are obeying the law and doing the correct thing.