"Nobody bikes in the New North End"

Last Wednesday was the inaugural “Beach Bites” Food Truck event, a gustatory celebration that will be happening the first Wednesday of every month through September at Leddy Park-right behind the arena, looking out over a placid Lake Champlain. I know the Truck Stop Friday Night at Arts Riot is crazy, but how busy could a similar event in the New North End be, especially in the middle of the week...

We arrived early to set up Valet Bike Parking well before the 5 PM opening.  We decided to set up 8 racks, figuring that would be sufficient, because I keep hearing that “nobody bikes in the NNE.” But just as we opened, a cavalcade of cyclists started to appear- just in ones and twos at first, but the trickle quickly turned into a flood of friends and families arriving in droves.

“How many are we parking?” 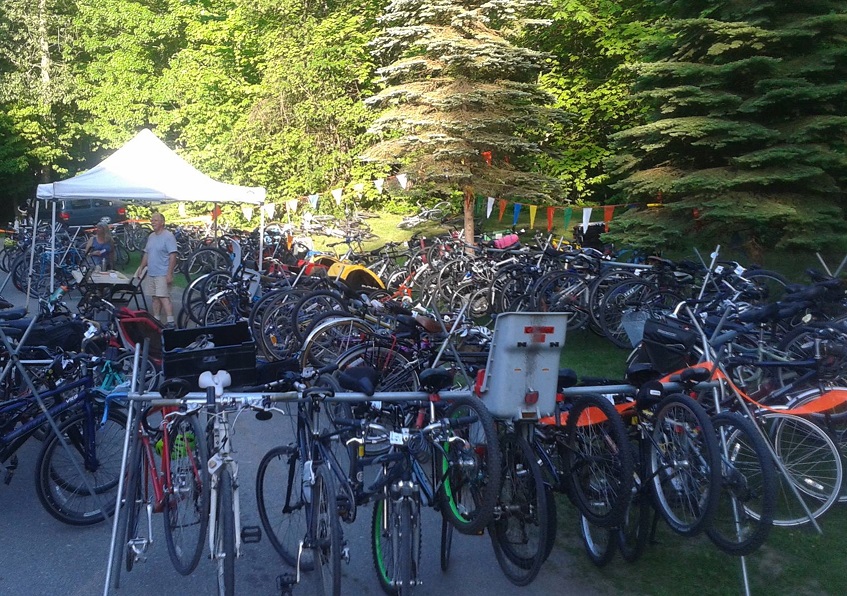 In just a short time, we parked bikes of every description-from classic rod-brake Raleighs to light-as-a-feather road bikes and everything in between.  We had lots of Huffys and Schwinns, with a well-worn patina from years of joyful use, as well as cycles with trailers and tag-alongs, and even scooters and skateboards. (Our motto is: “If it’s human powered, we’ll park it.”)

We ended up hustling to put up 6 more racks-14 total- all we had on board, and we still had to park the overflow of bikes on the grassy knoll behind us. Elizabeth Seyler, the only brave volunteer who signed up, was up to the task, but we were quickly overwhelmed.  Luckily, Mark Bowman was idly looking at our volunteer sign up page that afternoon and saw we were short a volunteer or two and pedaled over to see if we needed help. Thank you, Mark! Sharon Fosbrook, a seasoned Valet Bike volunteer, was on her way for a bite to eat at the food trucks and jumped into the fray, saying  "I have food in the fridge at home- Let's go!" Thank you, Sharon!

When things slowed down, just a little, I started to ask the cyclists where they were from and the typical answer was the New North End. When I said to one family ''I thought no one biked in the New North End," the mother replied " I'm from the New North End and we'd bike a lot more if we had proper bike lanes."

There was lots of eager anticipation for the completion of the North Ave Demonstration Project and the chance to experience a safer route by bike to their destinations both in and around as well as out of the New North End.

We ended up parking over 230 bikes for the 3 hour event! - this is a personal record, and we are sure it will be broken at next month's event.

We've learned a lot from this night!  Next month we'll be better prepared with a larger and more visible location, more volunteers and even more racks!