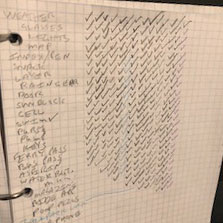 I use a checklists to negotiate my daily life.  Most people can keep stuff in their car, and take it with them wherever they go regardless of weight, shape and necessity.  However, on a bicycle all these things should be considered or you're in for an uncomfortable ride. I pack my necessary supplies for the day every morning before I leave the house.  The following is for fall and summer fun rides.  As the weather gets colder, my riding becomes more utilitarian, although I can usually get in a few fun rides in November and early December.  Once the snow flies and the weather is consistently cold, my riding become strictly utilitarian until spring.

Weather - I use the Weather Channel app on my iPad. I can view a number of different locations in addition to Winooksi .  That way, if I am going to Saint Albans or Montpelier I can check the weather there.  This is important because sometimes rain is not predicted for Winooski, but is more likely at my destination.

Glasses - I always bring along my reading glasses, and my sunglasses.  If it is a gray day, or I am going to be riding in the early morning before sunrise, or after dark, I also bring along a pair of clear glasses.  It is important to have eye protection at all times when riding a bike.

Lights - I have four rechargeable lights, two front lights and two back.  During the daylight hours I set a handlebar front light to the flash mode and a rear light to flash mode as well.  After dark I add a second rear flashing light and a steady beam helmet light.

Map - I like paper maps.  This summer I used my Chittenden County Map, the one covering North Western Vermont and one for Addison County.  I have been driving and riding in Northern Vermont for 30 years but there are still many unfamiliar places.

Index/pen - I wear a high visibility vest when I ride and it has a breast pocket that zips shut.  I carry a pen and index card in that pocket so if I get an idea, I can write it down. It is easier than recording notes on my phone.

Snack - This summer I took many long rides and rediscovered how important it is to eat along the way.  I generally eat every hour. I favor dried fruit for a snack but recently I added pretzels and bananas.  I purchased a banana carrier as well.

Layer - Even in the summer, the weather can get suddenly cooler, especially after sunset.  I bring along a light windbreaker and as the fall advances, extra gloves, a neck warmer and warm hat.

Rain Gear - This summer I was riding in Underhill when an unexpected rainstorm soaked me even though the forecast called for only 20% chance of rain. It was a cool day, I wasn't prepared and I had to ride home instead of continuing on to Williston as I had planned.  I have the gear -- rain hat, socks, gloves, coat and pants, I just did not bring them along. (From time to time I have considered starting a company that manufactures raincoats, pants and boots for children.  Each item would include a bright red nose attached somewhere.  The line of clothing would be called 'Rudolph the Red Nosed Rain Gear.')

Door -  I have four bags of stuff hanging from hooks on my door - hats, gloves, neck warmers and socks.  I take out the necessary items when I am getting ready for a ride.  I also have three high visibility vests hanging on the door.  I almost always wear one of them.  I call them high visibility vests instead of reflective vests because the latter seems to imply that the vests are philosophers.

Sun Block - Sun block is one of those items that I would definitely forget if I did not have it on a checklist.

Cell - One of the main reasons I bought an iPhone was for bike emergencies. I have a pump, bike tools and an extra inner tube but other things can happen. I recently upgraded my phone, and it has a better camera than my last one.  I have been taking more photographs on my rides, but riding still comes first.

Swim Check List - For bike and swim rides I have a separate swimming checklist.

Purse - Rather than carry my large leather wallet, I put my drivers license, a credit card and some cash in a purse which also contains change, some pikstirs for getting food out from between my teeth, a packet of aspirin,  an anti diarrhea pill and earphones for my phone.

Pump - I am paranoid about flat tires even though I have had only one in the last year and that was on Riverside Avenue in Burlington.  Having a pump along and a spare inner tube makes me feel a little more secure.

Keys - I am obsessive about locking my door.  I used to say a word each time I locked the door, so that later on, if I am not sure if I locked the door, I can remember the word.  My son is also obsessive about locking the door, and he suggested a different way of remembering.  He makes a visual note of the act of closing locking the door, as well as noting the feeling of physically locking it. I have started to employ multi-sensing  for remembering.  I say a word, listen to the sound the door makes when it locks, along with the sound of the clinking keys.  I also retain a muscle memory of locking the door and a visual memory.  I  tried licking the keys, to see if I could include a taste element, but they don't have much taste.  At that time I still have the lingering taste of my morning coffee, so that it was I notice.

Ferry Pass - I was on the first  bike ferry ride of the season and also the last.  Some of my most beautiful summer rides have been in South Hero and Grand Isle.  I am grateful to everyone that makes the bike ferry possible.

Bus Passes - This summer I bought 10 bus ride tickets for local busses, local commuter busses and link commuter busses.  I took a couple of rides that began  with taking the bus up to Saint Albans and then rode back by a circuitous route.

Aspirin - Aches and pains happen when I ride, and a couple of aspirin can be helpful.

Water Bottle - I fill my water bottle before each ride.

Mug - I bring along my green mug if I am going to stop for coffee.  This means I can sit outside and drink coffee and read.  The mug keeps beverages really hot, so I make sure to add enough half and half to make the coffee cool enough to drink.  Up in Grand Isle I discovered that Keeler's Store makes good cold brew coffee and so I drank that on a couple of occasions.

Ride App - This summer I installed a ride app on my phone.  I used it to track my first and probably only century ride, but I decided to remove it a couple of weeks ago, both because it did not work very well and because it is better for me to just enjoy my riding without worrying about how far or fast I go.

Ear phones - I never use earphone when riding, but always bring them along as I've found them to be useful for white noise.   I use a white noise app and my favorite setting is ocean storm.  It is the one that is best for blocking out unwanted conversation. On a ride this summer I stopped at the Bristol Cafe in Hinesburg for a cup of coffee.  I had my mug, my phone, my glasses and a copy of the New Yorker but no headphones.  This meant that I could not drown out a loud conversation at a nearby table.  My mother could read while others were talking, but I have never been able to do it.  I ended up going outside to read.