Is it legal to pass cars on the right in Vermont?

The other day we were asked about what options a person riding a bike has when cars are backed up. Can a rider pass on the right or left? Do they get in line with the vehicles?

Here's the original question we got: 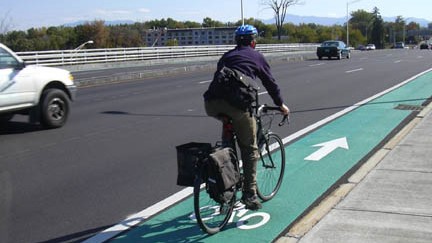 This is not the first time we’ve been posed this question, and it is always a bit of a tricky concept, made trickier because there is little specificity in the Vermont statutes about how motor vehicles should interact with bicycle lanes on the roadway.  FYI: Vermont statutes define a bicycle lane as either a specially marked bike lane, or the paved shoulder of a road.

But, for the purposes of this question, Vermont’s rules for passing on the right don't require an existing lane, which makes things less ambiguous for people riding bikes.

The rules for passing on the right in Vermont are pretty lenient.  All you need to pass on the right is enough unobstructed pavement space for at least two vehicles to move side by side.

Basically, if you can fit your vehicle safely next to the vehicle you’re passing, without hitting something, you are legally passing on the right.

Since bicycles are considered vehicles per Vermont State law, this means that the "two vehicle" space requirement is much smaller than it would be for two cars.  Here are the two relevant statutes on this subject:

A good explanation of how these two rules work together to provide clarity on whether a bicycle can pass slower car traffic while riding on a shoulder or a bike lane is from this situation in California, where the applicable rules are the same as those for Vermont: https://www.bicyclelaw.com/can-a-bicyclist-pass-on-the-right/

In practice, we tell people to treat the part of the road where a bicycle is as a lane of travel (which it is), which clarifies pretty much everything about the interactions between cars and bikes on the road.

That said, whenever passing another vehicle, keep an eye on what the traffic ahead of you is doing, because other vehicles might be making turns without looking for vehicles, or a person on a bike, to the right of them, opening doors into the roadway, swerving, or engaging in any number of behaviors that can endanger a vulnerable user.

To sum it up, you can legally pass vehicles on the right when riding a bicycle if there is safe road space on which to ride. If you choose to do so, use common sense. Now get out there and ride!