My yoga teacher recently mentioned embracing winter.  While that may be going a little bit too far, there are some advantages to riding in the winter.  There are fewer bike riders and pedestrians when it gets cold and snowy.  That means I have fewer obstacles to contend with on my rides to and from Burlington on the  Riverside Avenue bike/pedestrian path.  We will set aside, for now, the irony that I teach winter bike riding workshops which are designed to get more people out on the road in the cold. Also, even though there are many more winter riders than there were ten years ago, I still get comments about how tough I must be to ride through the cold and snow.  There is also the unearthly beauty that, from time to time, manifests itself during the winter.  Ice and snow and afternoon sunlight combine to create a paradisiacal scene.   Last but not least, if your ride through the winter you will be in shape for longer rides when it gets warmer and bike riding is actually enjoyable again!

Chittenden county continues to grow and there are more cars than ever.  Many roads don’t have enough room for a bicycle.  Riding from Burlington to Dorset Street by way of  Main Street is never easy.  I have to spend a lot of time on sidewalks, and I have to stop as cars enter and exit Route 89.  Cars are moving fast and there are a lot of them.  There are not many good alternate routes from Burlington to Dorset Street and I refuse to be intimidated by the traffic.  I aim to stay calm when riding in challenging circumstances.  It is easy to get tense and even flinch when cars get too close. I have to make a conscious effort to stay focused and calm.  I also spend more time riding on sidewalks than I used to.  I worry that I am giving in to my fear, but sadly, the fear may be rational.

It is ironic that bike lanes often start when they are no longer really needed.  On Williston Road, Route 15 and Shelburne Road, there is no room for bikes where there is the most traffic and riding is the most dangerous.  After the worst of the congestion, the bike lanes begin.  In Mallets Bay, there is a great new recreational bike path, but it ends before it is really needed, between Prim Road and Mallets Bay Avenue.

There have been some improvements in bike lanes.  I appreciate the bike lane on Pearl Street and the one on North Union and South Union.  Getting new infrastructure for bicycles seems to take forever and I feel impatient at the slow pace of change, but I am glad that some improvements have been made.  I don’t enjoy going to public hearings about bike lanes and infrastructure, but my resolution in the new year is to be more involved in the public debate about these issues. 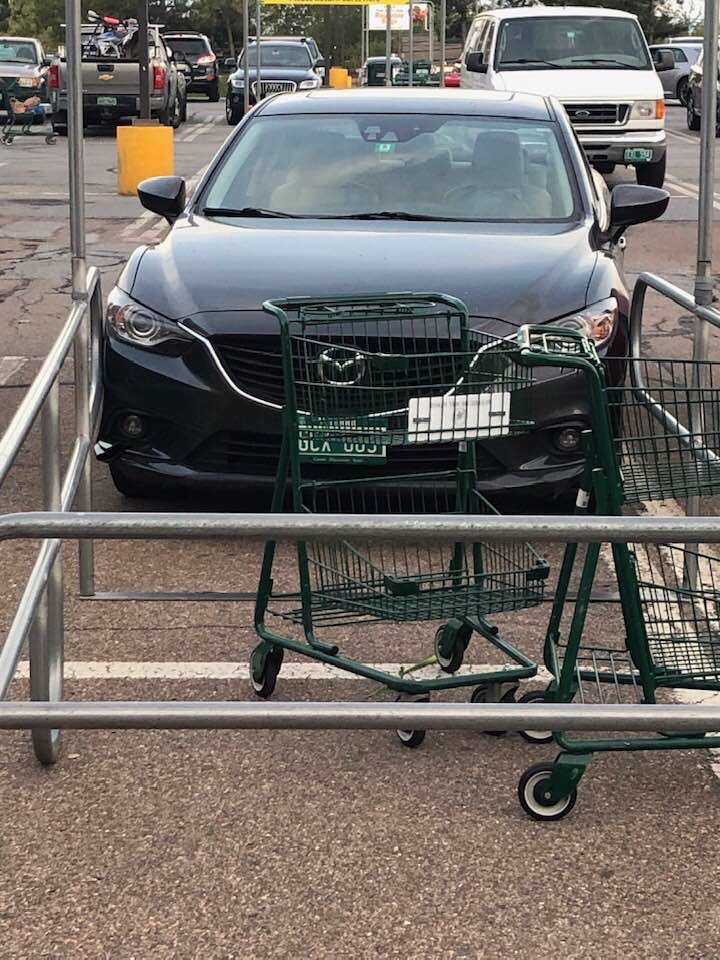 I live in Winooski and shop at Costco.  Years ago I discovered a back way to Costco through the Gilbrook Nature Area.  I can get to Costco and back without going on the main road.  With the fat bike, I got last year, the ride is even possible when there is snow on the ground.  Using panniers and bungee cords I can carry anything I buy at Costco.  Paper towels are the biggest challenge because the package is so bulky.  In addition to paper towels, I regularly buy beef patties for my son, trail mix, wet and dried cat food, and beer.  When I pull into Costco I am almost always the only bike rider, and that gives me a great sense of satisfaction.  I enjoy feeling unique.  I am grateful that they have a bike rack, although sometimes it is blocked by shopping carts.  Sometimes go to  Shaw’s, near Costco.  They do not have a bike rack.  Last summer I approached the store manager and asked him about installing one.  He said he wanted to, but that corporate lawyers made any changes difficult. I don’t know if he was telling me the truth or just brushing me off with a convenient lie.  It seems crazy that Shaw’s can have propane tanks in front of the store, but that a bike rack is too dangerous to be installed without a review by a team of lawyers.  I tried contacting Shaw’s Corporate Headquarters, but I never got an answer to my email.  For now, I lock my bike to a shopping cart corral.  I choose one that is not used much and lock my bike to a  corral near a light pole which protects me from cars parking too close to my bike.  Even that does not guarantee that someone will not try to park right in the corral.

Drivers often park in bike lanes.  One of the worst offenders is the patrons of Hall’s Hitching and Welding on Riverside Avenue.  (Once, years ago, as my daughter Alice and I were driving by she said, “Dad, that’s where I want to get married.”)  There is often a truck partially or fully blocking the Riverside Avenue bike path.  I posted something about it in the Facebook group Bikeable  Burlington Now. It seems that many bike riders have experienced this problem.  Some have gone into Hall’s and talked to the owner but have gotten little satisfaction and parking enforcement is slow to act.  It seems that there is no good solution.  Just going around the parked vehicles may be the best way to deal with the situation.  When I get angry at a car driver I tend to hold onto the anger for a while and engage in revenge fantasies. That is not particularly useful.  I would prefer to let things go.  I want to flow around obstacles like a stream of water without getting caught up.  This is nicely illustrated by one of my favorite Zen stories.

Many years ago a senior monk and a novice were walking along a path.  They came to a geisha who was hesitating before crossing a stream.  The stream was muddy and she was reluctant to get her fine kimono wet and dirty.  The senior monk offered to carry her across the stream and she agreed.  He put her down on the other side of the stream and continued on his way with the novice.  After fifteen minutes of silence, the novice could not contain himself anymore. He blurted out, “You know that contact with women is forbidden to us.  Why did you pick up that geisha?”  The senior monk replied, “I set her down again fifteen minutes ago but you are still carrying her.”

Last month, on a ride home from the YMCA I was heading south on N. Union Street when a pickup truck pulled in right in front of me and parked in the bike lane.  I waited for a minute or so and then went around the pickup.  I was annoyed.  About a block later, without signaling, a car cut me off with a right-hand turn.  I was not in danger but I had to stop again.  At first, I thought, “Here we go again.”   Then I realized that I was feeling really good, I was enjoying being on the bike and not in a car.  I decided to switch from anger to gratitude and that helped me feel better.  My reaction in no way excuses boorish behavior by drivers.

In late December someone put a ‘Utility Work Ahead’ sign right in the bike lane on South Union Street.  I moved it onto the space between the road and the sidewalk.  I did not mention it to the people directing traffic around the project.  Sometimes just taking action is the simplest way to make things a little better.

Riding is a good aerobic activity, strengthens your legs, and also enhances balance, but you also need upper body strength and general flexibility.  In addition to riding, I also do yoga and swimming.  Bike riding is great because it can be integrated into your everyday life without too much difficulty.  You can get some of your daily exercises while doing errands of getting to work.  Current research tells us that even moderate exercise a couple of times a week makes a big difference in our overall health and well-being.