For the past few months, I have alternated between writing about walking and writing about bicycle riding. With this blog, I am combining riding and walking in the same post. I walk and ride every day, so it makes sense to write about them together. Some individual sections will still be about just bicycle riding or just walking, but others will be about both.

Last summer I did a Local Motion Everyday Biking Workshop for a utility company.  Even before the workshop began, a few people started making comments about lawless bike riders and how discourteous they are.  As we proceeded, some of the exchanges grew heated.  I was surprised at the level of hostility some people felt toward bike riders.  Pedestrians jaywalk all the time, but I don’t hear many complaints about them.   I did my best to refocus the group, but the same things came up more than once.  I felt angry, but I tried to stay positive. One gentleman said that because there is not much room on some streets cyclists should find alternate routes.  A bicycle might conceivably slow down someone who is in a hurry to get to work.  I felt like saying, “Yes, I understand your frustration, when it is ten degrees outside, with the wind blowing and snow falling, and I am on my bike, I feel so sorry for those poor drivers in their warm cars who have to slow down for me.”  Sarcasm has no place in a workshop, but it was tempting.  After that experience I started prefacing Some of my workshops with a statement like this —  “We all acknowledge that there are both drivers and bike riders who ignore the traffic laws.  Local Motion believes that both drivers and riders should obey the rules of the road and be courteous to others.  The main difference between car drivers and bike riders is that car drivers can kill bike riders while bike riders rarely hurt car drivers.  In this workshop, we will cover ways for bike riders and drivers to share the road. We will avoid spending time on discussions of bad bike riders or bad car drivers.”

Years ago I volunteered with Bike Recycle.  I discovered that I don't have much of a feel for bike mechanics but I continued for six months or so. I can change a tire, lubricate my chain, but the chain on if it falls off and make adjustments to my pedals.  Recently I installed a pump holder on all of my bikes.  For most repairs, I go to Old Spokes Home. I believe that all of the area bike shops have reputable mechanics who will do a good job.  I prefer Old Spokes both because they are the shop I have been going to for years and because of their social mission.

In October of last year, I went to an event sponsored by Howard Center.    It was at the UVM Alumni House. The evening celebrated the achievements of Senator Patrick Leahy, and many of the most powerful people in Vermont were present.  I got to go because I have been an employee of the Howard Center for more than 30 years.  I put on my suit and tie, and a nice pair of shoes.  It is quite possible, in most weather, to wear formal clothing on a bike.  I biked over from Winooski and found that there was no bike rack in front of the building.  I locked my bike to some railings.  It was a pleasant evening if a little long.  I was given a special name tag that I still have.  I got to see many people I have not talked with in a while.  As I was leaving, surrounded by monster SUVs I said to an old friend, “I hope someday more than one person will be riding their bike to this kind of event.”

You will note that I wore nice shoes to the event described above.  Three of my bikes have double-sided pedals so I can clip in or use regular shoes.  Many men ruin elegant outfits by combining them with athletic shoes.  That kind of footwear is fine with jeans or other casual clothing, but if you wear more formal togs, a nice pair of shoes is essential.

I don’t get flats very often.  I use puncture-resistant tires and change tires before they get too worn out.  I always bring along a pump, bike tools, and a spare inner tube.  I also check my pump, quick releases and spare inner tubes each month. If any of those elements fail, I wouldn’t be able to change to fix a flat.  Last time I checked the quick releases on my yellow commuter bike, both of them were impossible to open without jamming a screwdriver under the quick-release lever.  I lubricated the quick-release levers and adjusted the tension so that it will be easier to open the quick release if I have to.  The last two times I got a flat tire I was able to bring my bike inside and use a standing pump to inflate the tire.  I was lucky.  I always bring a cell phone with me so that if I am on a long ride and can’t fix my tire, I can call for help.  Flat tires make a good subject for free-floating anxiety.  Considering how few flats I have had over the years, it is largely irrational anxiety, but that doesn’t make the anxiety any less real.  When I am heading out for a long ride, there is always a sense of both exhilaration and trepidation.  They seem inseparable. I have noticed that if I am anxious about something else, something not having to do with riding, my flat tire anxiety fades into the background.  Usually, I can only really worry about one thing at a time.  This is a mixed blessing! 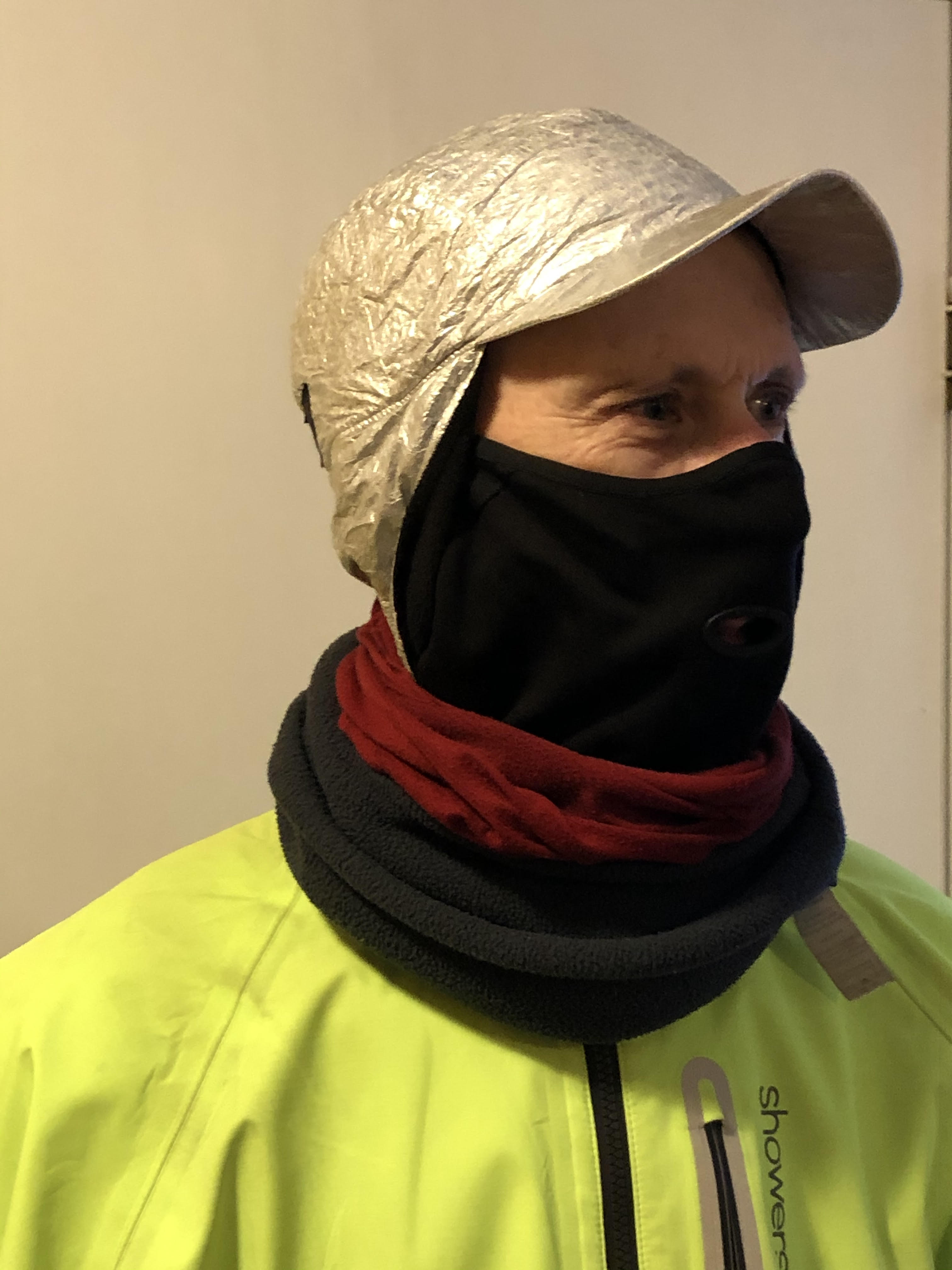 I am much more tolerant of heat than I am of cold.  As long as I drink plenty of water, I feel happy walking or riding when the temperature is up in the ’80s.  I avoid long rides when it climbs into the ’90s.  Clearly I live in the wrong climate, but I have been in Vermont for much of my life, and this is where I feel at home. Adapting to cold weather riding and walking has been a long process.  The challenge of cold is compounded by snow and ice.  New technologies help.  Recently I bought a balaclava with a brim and a breathing hole.  The balaclava is silver. I look as if I am riding with an aluminum foil hat.  I have told my friends that the hat prevents the aliens from communicating with me via the brain implant I received when I was abducted.  This balaclava is a real game-changer in the snow.  Wearing ski goggles can be a challenge when it is very cold because even the best goggles fog up. With the brimmed balaclava, I can keep the snow out of my eyes unless it is really coming down hard.  You can get the same kind of eye protection from snow by wearing a baseball cap over your winter hat.    I also have a balaclava with a plastic mouthpiece that enables me to ride or walk in sub-zero temperatures.

Here is what the Wiktionary tells us about the origin of the balaclava:

From the city of Balaklava in the Crimea, in Turkish balıklava (“fishing ground”). During the Crimean War, the British troops suffered from cold due to improper clothing. When the news spread in the home front after the Battle of Balaclava in 1854, the people began knitting warm clothing for the soldiers, including woolen caps to be worn under the helmet, which were named balaclavas by the troops.

The cardigan sweater is also associated with the Crimean War:

The cardigan was named after James Brudenell, 7th Earl of Cardigan, a British Army Major General who led the Charge of the Light Brigade at the Battle of Balaclava during the Crimean War.[2] It is modeled after the knitted wool waistcoat that British officers supposedly wore during the war. The legend of the event and the fame that Lord Cardigan achieved after the war led to the rise of the garment's popularity – supposedly, Brudenell invented the cardigan after noticing that the tails of his coat had accidentally been burnt off in a fireplace.[3][4] The name "Cardigan" is an anglicized variation of the Welsh place name Ceredigion.