Puddles can be a challenge because they hide potholes. Get up off your saddle when you go through a puddle so that if you hit a pothole you can absorb the shock with your legs rather than with your butt. When you are off the saddle you also keep your feet as far away as possible from the water, so your feet have less chance of getting wet.

Riding through puddles might also remind you of this poem:

spring when the world is mud-

running from marbles and

when the world is puddle-wonderful

from hop-scotch and jump-rope and

I have a yoga teacher who says it is important to maintain a good sense of balance, especially as we get older. Many serious injuries are caused by falls. I work on my balance in two ways. I do yoga every day and part of my routine is a series of balance poses. I also put on my socks while standing up. Sometimes I hop around a bit and lose my balance, but I am getting better. I wear mostly Darn Tough or Smartwool socks. They have lifetime warranties and if they wear out you can bring them back to the store where you got them and get a new pair.

I try to maintain balance in my life, but I am not always successful. I can get carried away and get obsessed with one activity or problem and ignore other duties and projects.  Balance in physical activities is important because no sport or activity can provide total fitness. Bike riding and walking both enhance aerobic fitness and lower body strength. I also do yoga and swimming. Yoga helps with flexibility and swimming builds upper body strength. 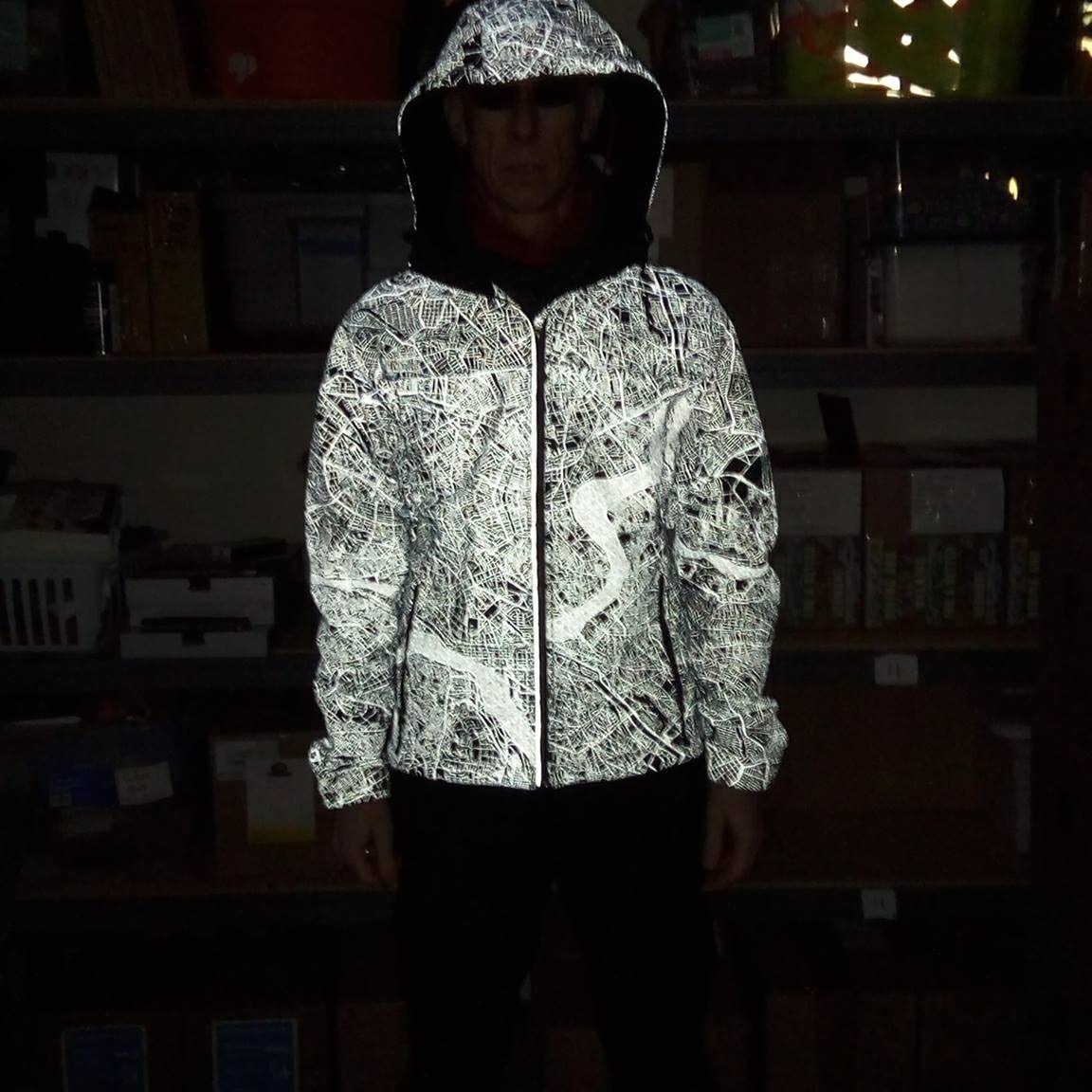 This jacket has a unique reflective system. In the daytime, it looks like a black hooded jacket with a pattern of faint silver lines. At night, it becomes a highly visible reflective jacket. The silver lines are maps from seven different cities where bike riding is popular: Portland, New York, Washington DC, Paris, Barcelona, Amsterdam, London, Newcastle, Berlin, Sydney. I have never ridden in any of those cities but I have walked in New York, Washington DC, Paris, and London. Each jacket is unique. As you can see from the photograph, this jacket is really noticeable in the dark. If I wear this jacket while riding in the daytime, I  wear a bright reflective vest over it because black is not a great color for visibility during the day. It has some insulation so the jacket is good for colder winter riding. I have found the Showers Pass company to be responsive about returns and repairs.

The photo was taken in the supply cabinet at Local Motion by Mary-Catherine Graziano. 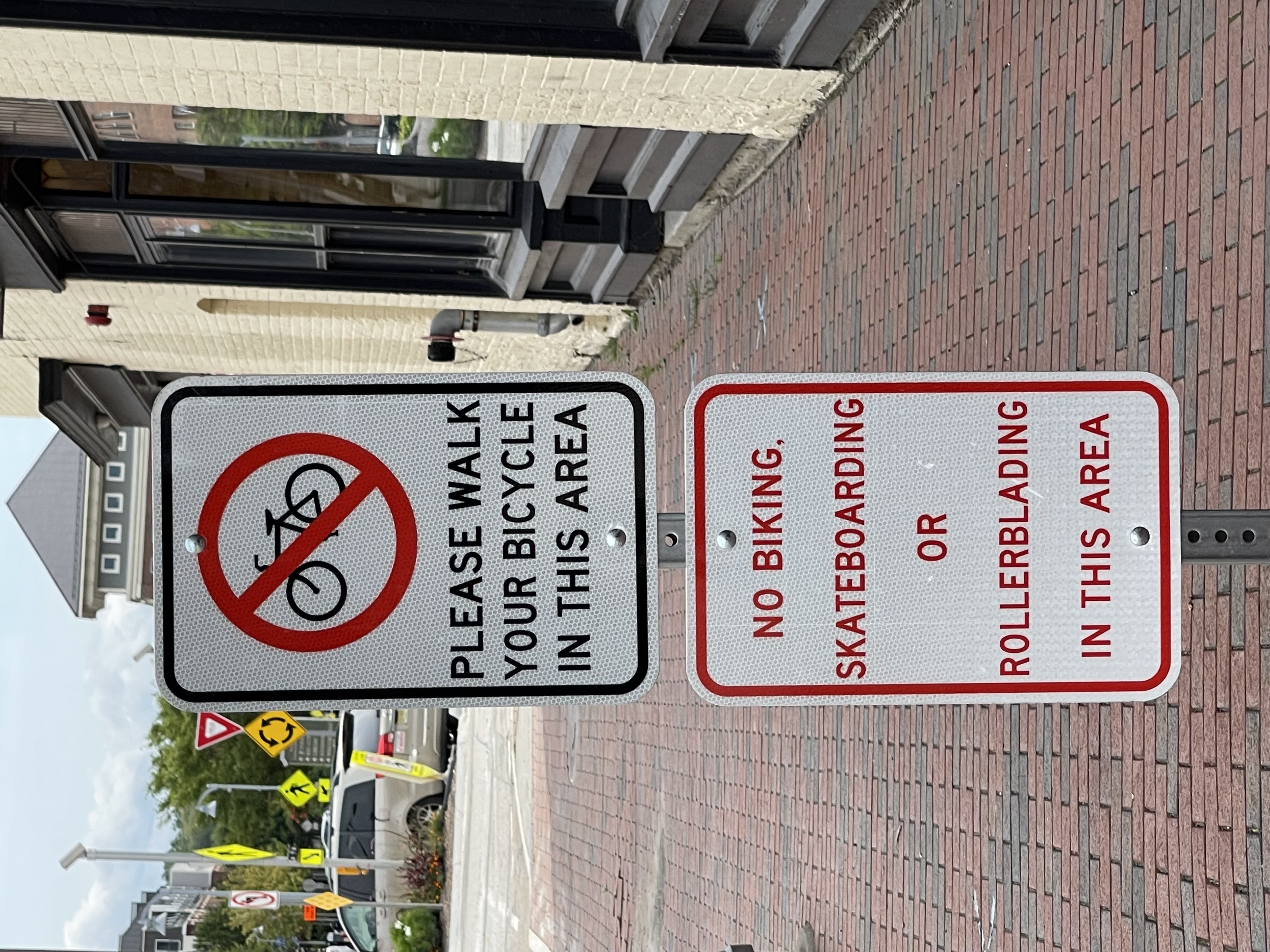 Last winter there was a  sign in Winooski just over the bridge from Burlington. It asked bike riders to walk their bike. As far as I can see all bicycle riders ignored it. The problem is one of infrastructure. The recreation path on Riverside Avenue debouches onto the bridge and then the bridge sidewalk turns into a regular sidewalk. To get to West Canal Street from the bridge you have to ride on the sidewalk for a short way. It seems silly to get off and walk. I talked to Jonathan Rauscher, Director of  Winooski Public Works about this problem and he has suggested a shortcut through a city park. This would solve the problem but the shortcut has never been created. Further along that same sidewalk there is a row of restaurants. If I go that way I walk my bike. It makes sense to walk my bike where there is lots of pedestrian traffic and many doors opening directly onto the sidewalk. In the opposite direction, going toward Burlington, if you are going to use the bridge, you have to get onto the sidewalk at West Canal and Follet Street because West Canal is one way in the wrong direction. The shortcut I mentioned above would also help to go in that direction. All this would be moot if there was a safe way to ride across the bridge on the road over. I always prefer riding on the road to riding on the sidewalk. With two lanes in both directions and no room for bikes, riding with heavy traffic is dangerous. The sign would not have been a problem, but it was attached to a base and could be moved around. I contacted Jonathan and he said they might just attach the sign to a fixed pole. Almost every week I moved the sign off the sidewalk and then someone moved it back to the middle of the sidewalk. Not only did it block the sidewalk plow, but it also made it difficult for people in wheelchairs.

In early January I emailed a photo of the sign to Jonathan. The sign was once again in the middle of the sidewalk. He told me that he had directed his crew to remove the sign until the spring because it blocks the sidewalk plow.

In the summer the sign returned but it was on the wide sidewalk on West Canal street in front of the Chinese restaurant and so it was easy to ride around it. A partial victory.