At a four-way stop sign make eye contact with car drivers in the intersection. Even if you are riding with lights and reflective clothing, it is possible for a driver not to see you. Signal your intentions clearly by pointing in the direction you are going to go. If possible take the center of the lane when you get to a stop sign. You are much less visible to cars if you are over to the right and a car taking a right turn is more likely to turn into you.

If I arrive at an intersection at the same time as a car, I wave the car through. I would rather they were gone than waiting impatiently for me to go. I do not run stop signs when cars are present.

As a general principle committing to a course of action and following through is better than being hesitant.  Car drivers get nervous when bike riders start doing one thing, change their minds and then do something else. Hugging the curb too closely gives you little room to maneuver around obstacles or potholes. When riding along a street with parked cars, riding too close to the cars puts you in danger of having someone open their car door right in front of you. Being overly cautious is more dangerous than being assertive.

I bought this linen blazer many years ago in a second-hand shop in Saint Albans. I paid $30 for the jacket, which was a lot of money at the time. Blazers are good for cool weather riding when you want a little elegance in your biking ensemble. They are also good for taking walks. The liner helps with wind resistance but sometimes when I am riding, I have to wear an additional wind barrier under the jacket. I have a red wind shirt that does a good job of blocking the wind. Much of my bike wear is polyester or nylon. While both of those fabrics have many good qualities, I prefer to wear wool and linen. Cotton is not practical for longer rides, but in the summer it is fine for shorter jaunts.

The Walker: On Finding and Losing Yourself in the Modern City by Matthew Beaumont 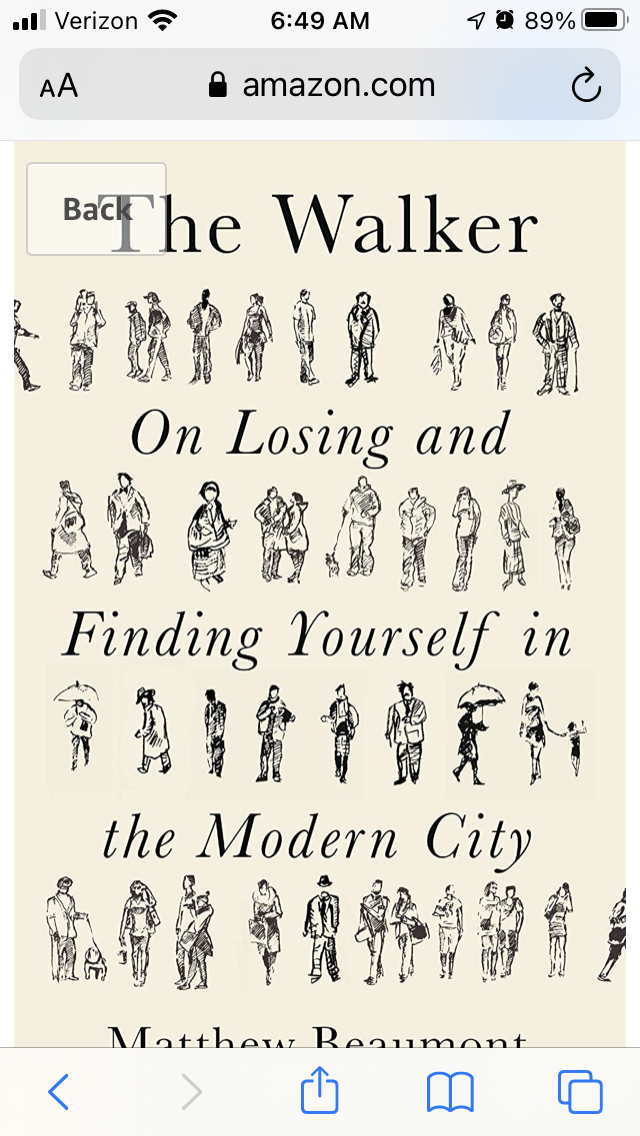 This book is about writers who have written about walking. It is more a book of literary criticism than one about walking and sometimes Beaumont drifts from the topic of walking to other concerns. I do the same in this blog. I enjoyed the chapter about the big toe and how important it is for walking. One of the things that differentiate us from our pre-human ancestors is our big toe.  Humans have a big toe that is oriented to the front while primates have an opposable toe that can be used for gripping branches. The big toe is also the one that, when we are standing up, is the first part of our body to move forward into the world. Patrick Mahomes had turf toe during the last Super Bowl and it may well have been a factor in his loss to the Buccaneers. (Bonus riddle: How much does pirate corn cost? A buck an ear.) I once dropped a dumbbell on my big toe and it was difficult to walk for some time afterward. Big toes are important. In the nursery rhyme about the piggies, the big toe is the one that goes to market. 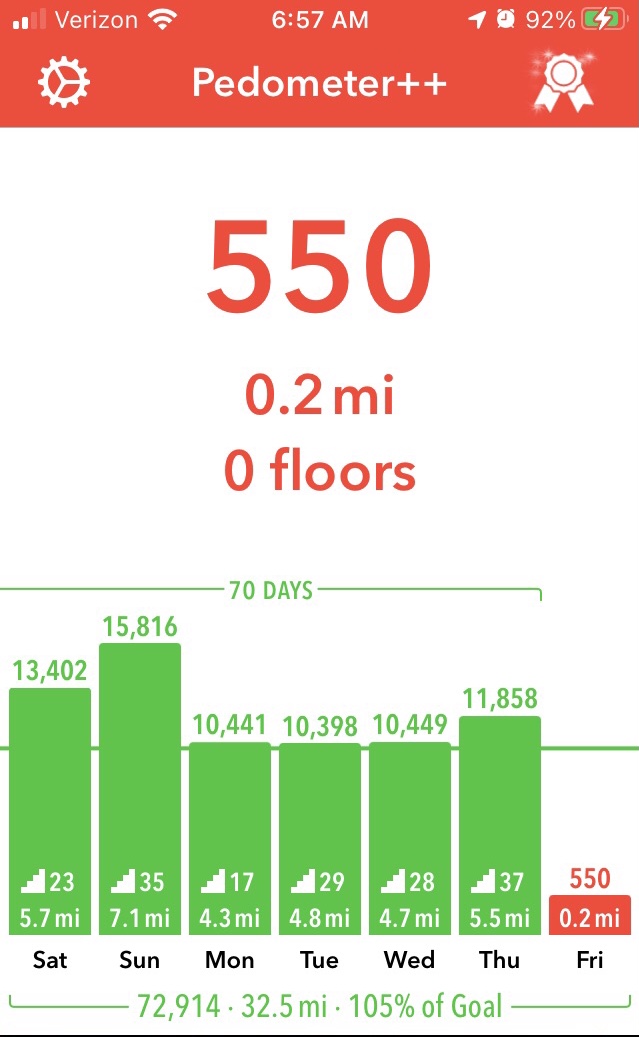 Last spring I got a secondhand Garmin watch which I used to track my riding mileage. The watch also automatically kept track of my daily steps. At that time my average was around 7000 steps a day, but my goal was 10,000. When some people get a Fitbit they become addicted to walking more and more steps each day. David Sederis has an essay about that addiction in his book “Let’s Explore Diabetes with Owls.”

In February I got a smartwatch. It became possible to keep track of all kinds of health and exercise statistics, including swimming, bike riding, yoga sessions, and steps. On Friday the 19th of March I began a stretch of days when I did more than 10,000 steps each day. As of May 28th, I have done 70 days in a row. If I am short a thousand steps or so in the evening I will go out for a walk to get the rest of my daily steps. I have become obsessive about it.

My appetite for quantifiable goals fluctuates. Sometimes I am just content to ride, swim and walk without keeping track of mileage. At other times I really want to know how far I have gone and I want to push my limits. Both ways of exercising have their limitations. Pushing too much can mean injury and not paying attention to the joys of the activity itself and just cruising along without goals can get boring. Finding the balance is the challenge. Moderation in exercise is also difficult for me. My self-disciple centers around not doing too much. 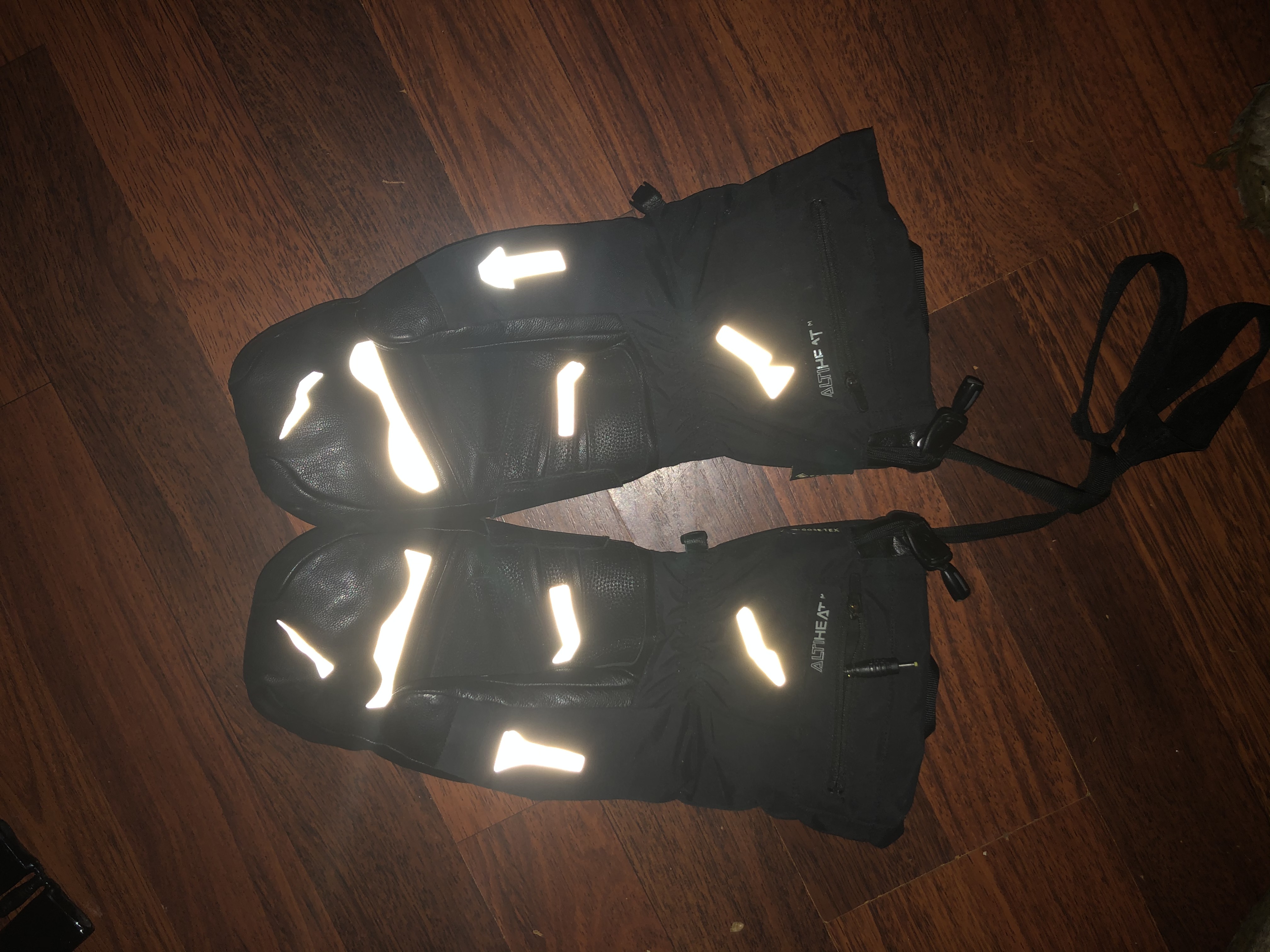 I believe that lights are a more effective way of being seen than reflective gear. That is why I use bright lights whenever I ride, even in the daytime. I use Niterider brand lights. They have a responsive customer service department.

Reflective gear and bright colors are a good addition to lights. I have some jackets and rain pants that came with reflective areas, and I have added reflective tape to other articles of clothing. I also have a couple of reflective vests. I have a friend who has an artistic touch with reflective tape and she has decorated some of my clothing. The heated mittens I got last December have a light on the back but no reflective surfaces on the front. My friend put tape on the front of the gloves so when I put up my hand to signal to cars at night, the glove is visible.

In January of this year, I took a ride that included climbing the hill from Lime Kiln Road to Route 15 at Saint Michael’s College. I was turning left so I moved to the left lane and a woman in a car came up beside me and said, “You might consider a brighter jacket.”  I said, “The lights are usually enough.” She said, “I almost hit you.”  My initial reaction was annoyance.  I was wearing a black jacket but I had two bright lights mounted on the back of my bike and two bright lights in front.  Panniers, bikes, backpacks, and wheels had lots of reflective surfaces.  I thought, “If you didn’t see me it’s because you were not paying attention.”

Upon further consideration, I decided she might have a point. I started wearing my reflective vest over dark jackets.

During the daytime, bright blue is highly visible. In the days before COVID when I occasionally attended large outdoor gatherings, the color that jumped out at me was blue.