Every commuter bike should have fenders. They make a big difference if you are riding in the rain or in slushy conditions. They are especially useful during mud season. Fenders are available for most kinds of bikes. Fenders are lightweight and will not slow you down.

Much of my winter riding is repetitive. I go from Winooski to Burlington and back. The route is essentially the same each time but on most rides, I notice something unique. Here is what I noticed on five rides in the middle of March.

At around 7:45 AM I  took Riverside Avenue into Burlington. As I was riding on the bike path two young men passed me. That was unusual. During the winter I don’t often see other bike riders that early in the morning. They looked like they were going on a long ride, not just commuting. On North Winooski Avenue, in the Old Spokes Parking Lot, There were a bunch of bike riders. I saw a young man taking a bike out of the back of a vehicle. I asked him where they were all going. He said that it was a 100-kilometer ride down to Hinesburg and back. It was 21 degrees at that moment and I could not imagine going for such a long ride so early in the year. My feet would be frozen after just a few miles. Also, going that far would be very difficult for me. I gradually put in more miles as the weather improves in the spring, but at that point, my longest ride had been ten miles. I had to admire those intrepid cyclists out for such a long brisk ride.

On Colchester Avenue, near the hospital, I saw a flock of geese flying north. By the side of the road, I noticed a Christmas Tree lying on its side. Winter leaving, spring on its way. A little farther on I saw another flock of geese. It reminded me of a joke disguised as a riddle. “Did you ever wonder why one side of the V is longer than the other? It’s because there are more geese on that side.”

In cold weather, it takes me a while to get ready to ride. I work in a group home and next to our office we have a bedroom for staff sleepovers. That is where I keep my coats, hats, neck warmers, gloves, balaclavas, and other gear. That is also where I get ready to ride. On the 15th it was around 19 degrees with a brisk wind. I was all set to go when I discovered that one of my electric mittens was not working. I tried a couple of times but it did not switch on. I could have taken my ride with one mitten on and one-off, but for some reason, I decided not to turn on either glove.  It was not a logical choice, but I don’t like the idea of imbalance. I did heat my glove liners. My book group will soon be starting ‘The Hamlet’ by William Faulkner. Earlier in the day, I had requested a biography of Faulkner from the UVM library. They now do outside pickup, so I stopped by the library on my way home. I had to take off my mittens to open my pannier for the book and my fingers got chilled. On the rest of the ride home, my fingers got colder and colder. I was thinking about returning the mitten to get it repaired but when I got home I switched the battery packs from one glove to the other and both mittens worked. I don’t know what happened but I am glad that they are both functioning. 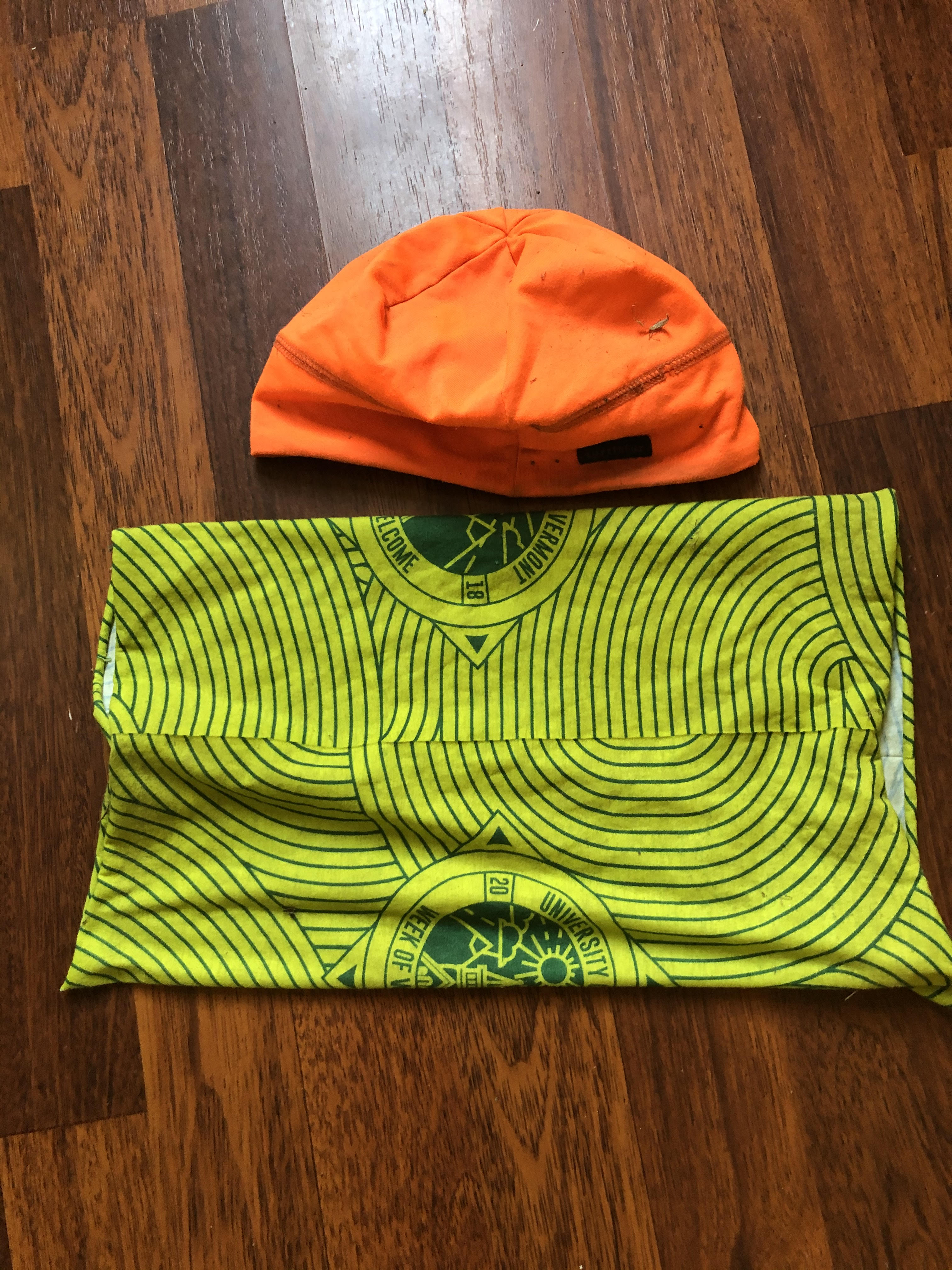 I find many useful items as I ride around the city. I was riding up College Street toward UVM when I saw an interesting-looking object on the ground. I stopped and it turned out to be a green neck gator, with a UVM insignia. I put it in my pocket well satisfied with the find. A few minutes later I saw something else that looked good. I stopped again and found an orange turtle fur fleece hat. I put it in the pocket with the gator. It is very unusual for me to find two things so close together. I felt lucky. Maybe it was a preview of Saint Patrick’s Day. 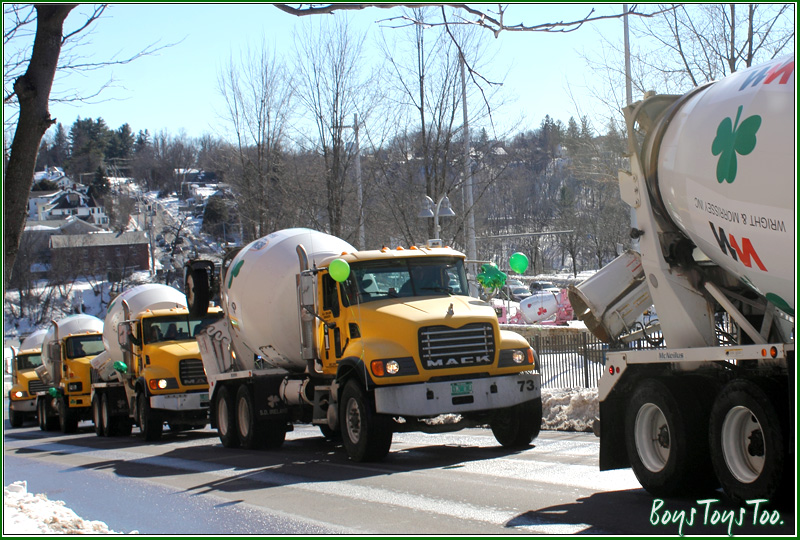 I went to the YMCA in the morning, and later in the day, I discovered that I had forgotten my razor and shaving cream in the shower stall. I went back to the YMCA and recovered the items. I headed up College Street and as I approached the top of the hill I heard the honking of many horns. At first, I thought it was a fire engine and then I thought it might be a wedding, which has been unusual on a Wednesday afternoon. I got to the intersection of College Street and South Prospect Street and I saw a long line of S.D. Ireland cement mixers heading into town. All of them were blowing their horns.  Two women on the sidewalk looked very confused. They did not seem to know what was going on. I shouted, “It’s Saint Patrick’s Day and the cement mixers belong to S.D. Ireland. They are celebrating!”  That seemed to clarify the situation for them. I was amazed at how many cement mixers there were. S.D. Ireland is a large company.

Ride slowly on recreation paths. You are sharing the path with pedestrians, wheelchairs, people with baby carriages, in-line skaters, children, and people who may not have much experience riding a bike.  Riding fast increases your chances of getting into an accident and it is also obnoxious. The road is the place to go fast. Many years ago I was riding too fast on the Burlington Bike Path. A boy was standing in the middle of the path with his bike, and without slowing down I yelled “On your left.”  He turned to the left and I went off the path instead of hitting him. I damaged my bike and hurt my shoulder. I was angry at the boy, and I yelled at him, but it was my fault. This was not brought home to me until I told the story to a friend and he pointed out that if I had not been going fast the accident would not have happened.

Since the improvements to the Burlington Bike Path, including widening the path and putting down a centerline, the path is easier to ride on and pedestrians mostly stay to the right of the line so it is easier for bike riders to pass them on the left. I still avoid the Burlington  Bike Path on summer weekends. Even the improved infrastructure doesn’t really help when huge numbers are using the path.

Pay particular attention when a recreation path crosses a road, cars are less aware of a cyclist on paths than when the cyclist is in the road. I believe that there should be stop signs for cars on the streets that cross the Burlington Bike Path. There are stop signs for bikes but not the cars. Drivers who are familiar with the path slow down, but newcomers to the area might not realize how much bike and pedestrian traffic there is on the path.