Consider joining a Facebook group such as Bikeable Burlington Now or Vermont Bike Commuters. Being part of a virtual bike community can help you feel less isolated as a bike rider. If you are riding all winter long, it helps to know that others are doing the same thing and sharing some of the same challenges. It is also a great place to get answers to your bike-related questions and find out about infrastructure developments and ways you can help improve bike riding and walking for everyone. Also, don’t forget to join and support Local Motion! 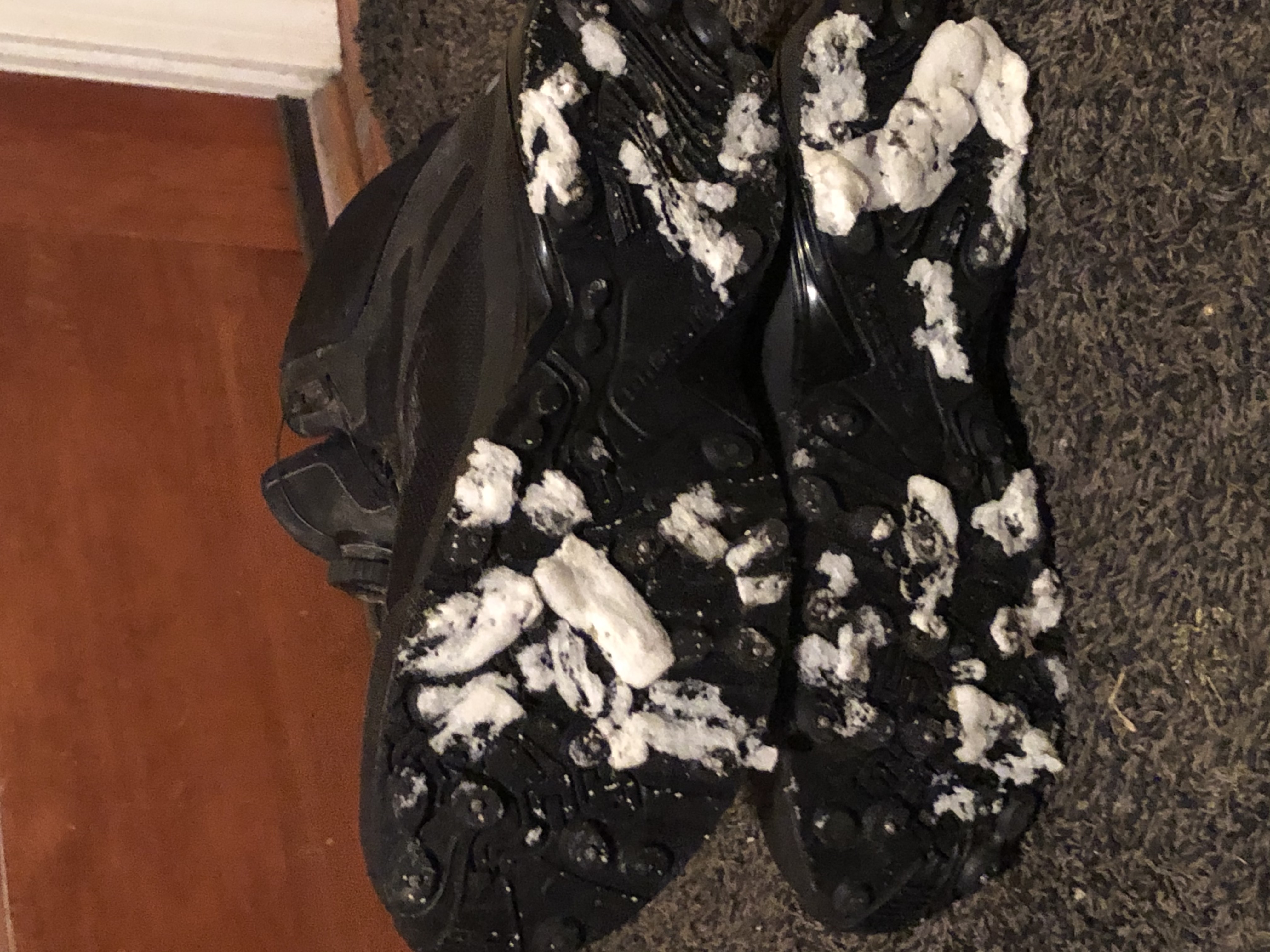 I had an old pair of Ice Bug boots, that I really liked, but they were wearing out so I decided to buy a new pair. I got a pair with dial-in laces so that I don’t have to worry about shoelaces getting tangled up with my bike chain. They are lightweight, waterproof, and more insulated than the old pair.  Metal studs on the sole provide extra traction on ice and do not mark up wood floors. I thought that the studs might slip on my bike pedals but that did not happen. The shoes keep my feet warm for short rides when it is above single digits. When it is colder I switch to warmer boots or use foot warmers.  With the dial-in system, they are also easy to take off.  At the YMCA there is a sign asking you to take off your boots before going into the gym or the locker room. I hesitated to leave my brand new boots just sitting around, so for the first week or so I put them in my locker. After they got covered with salt and worn in a bit, I started leaving them in the boot area.

Last week my son got a new computer. It was shipped with styrofoam peanuts and he left a pile of them in the front hallway. I had to step on them to get into the house and many of them got stuck to the bottom of my Ice Bugs because of the metal studs. It was not fun getting them all off.

On February 16th, I headed to the YMCA from my house in Winooski. There had been a big storm predicted but there were only 4-5 inches of snow on the ground. I was prepared to walk into town but with that amount of snow, riding was possible but challenging. This year there has not been a storm that has stopped me from riding. The sidewalk over the Winooski Bridge was covered in snow from the snowplow, so I rode in the street. I planned to go up Colchester Avenue so I was in the middle lane. The right lane turns onto Riverside Avenue. As the light turned green, and I started pedaling, a guy in a pickup truck, going in the opposite direction, yelled, “You are an f-ing idiot.” Ordinarily, this kind of comment makes me angry, but this time it put a grin on my face. I thought, “If he thinks I’m an idiot I must be doing something right.”

In 1982, I created a series of performances about a character I called The Grinning Idiot. I used a vacuum cleaner to pull Grinning Idiot Energy down onto the stage in City Hall in Burlington and I demonstrated Grinning Idiot attacks at a First Night event. The guy in the pickup didn’t see me grinning so he made a mistake and called me an f-ing idiot instead. I wish I had time to correct him.

The next day, in almost the same place, a woman rolled down her window and said, as she gives me a thumbs up, “You’re really prepared for the weather and highly visible.” It was a nice comment but also interesting that when people see me riding in the snow they feel free to yell comments from their cars.

Many years ago I was riding on Riverside Avenue and someone yelled “Hobo” from their car. I was puzzled because I was wearing clean bike gear and at the time I did not have a beard. I couldn’t figure out what he was saying. Finally, it dawned on me that he was yelling a homophobic epithet. I’m glad I initially misunderstood him, and I abhor that kind of comment, but it also makes me realize how important it is to articulate clearly when communicated with a moving vehicle! From time to time people shout from passing cars and I seldom understand what they are saying.

‘On Trails’ by Robert Moor

Moor describes hiking with a man in his 60's who has given up just about everything in order to walk. The man even had his toenails surgically removed so that he did not have to deal with them constantly falling out or getting infected from so much walking. That is an extreme case of an obsession. The movie ‘Free Solo’ is about the same kind of obsession. It features Brad Gobright and his rope-less climb of El Capitan in Yosemite National Park. He had to be perfect or he would die. His whole life was focused on climbing, nothing else really mattered. Obsession can bring great rewards, but there is also a price to pay. I have an obsessive kind of personality and I understand how seductive obsession can be. The downside is that when that one thing is achieved, life can feel meaningless. I guess that is why the sculptor Henry Moore told writer Donal Hall that the secret to life is to pick a goal that will absorb all of your mind, body, and soul and to make sure that the goal is impossible to achieve. A focus on just one thing means many other things are excluded. I have been reading Aristotle recently who advises moderation. I have a tendency toward all-or-nothing thinking, so moderation is a challenge.

Eight years ago I spent six months reading all the works that Charles Dickens published during his lifetime. I also read his best-known biographies. For those six months, I didn’t read anything else.  The University of Vermont subscribes to the ‘Dickens Studies Annual’, which publishes essays about Dickens and Victorian England.  It was a pleasure reading the Annual because I knew enough about Dickens to understand all of the essays and for the most part I had read the primary texts referred to. Of course, I only scratched the surface of Dickens Studies. At this point, nobody could read everything published about him. Nevertheless, it was an interesting reading experiment. After those six months, I went back to much more eclectic reading.

Dickens was a dedicated, walker. When he was recovering from the death of his father, he often walked through the night, covering more than 20 miles. He described the hours from midnight until dawn as the time for true night walking, when darkness and mystery envelop the streets.

When I lived in London, many years ago, I  spent a lot of my time walking through the city but I almost always walked in the daytime or the evening. I was never a true nightwalker.

Last month I was riding on North Winooski Avenue and I noticed that an SUV was in the bike lane. The white lines indicating the bike lane have faded but they are still visible if you look. Cars are supposed to stay in their own lane until they make a right turn, and not block the bike lane. Recently I have noticed more and more cars ignoring the bike lane at that intersection. The light was red so I pulled up to the driver’s side window and got the driver’s attention. I told her that she was in the bike lane and she made excuses that didn’t make much sense. As she rolled down her window I realized that I knew her, we were part of the same organization for a while and had been to many meetings together. I was wearing my Cold Avenger balaclava with the plastic mouth and nose covering, so I’d don’t think she recognized me but it was a potentially embarrassing situation!