Helpful Hint for the Month 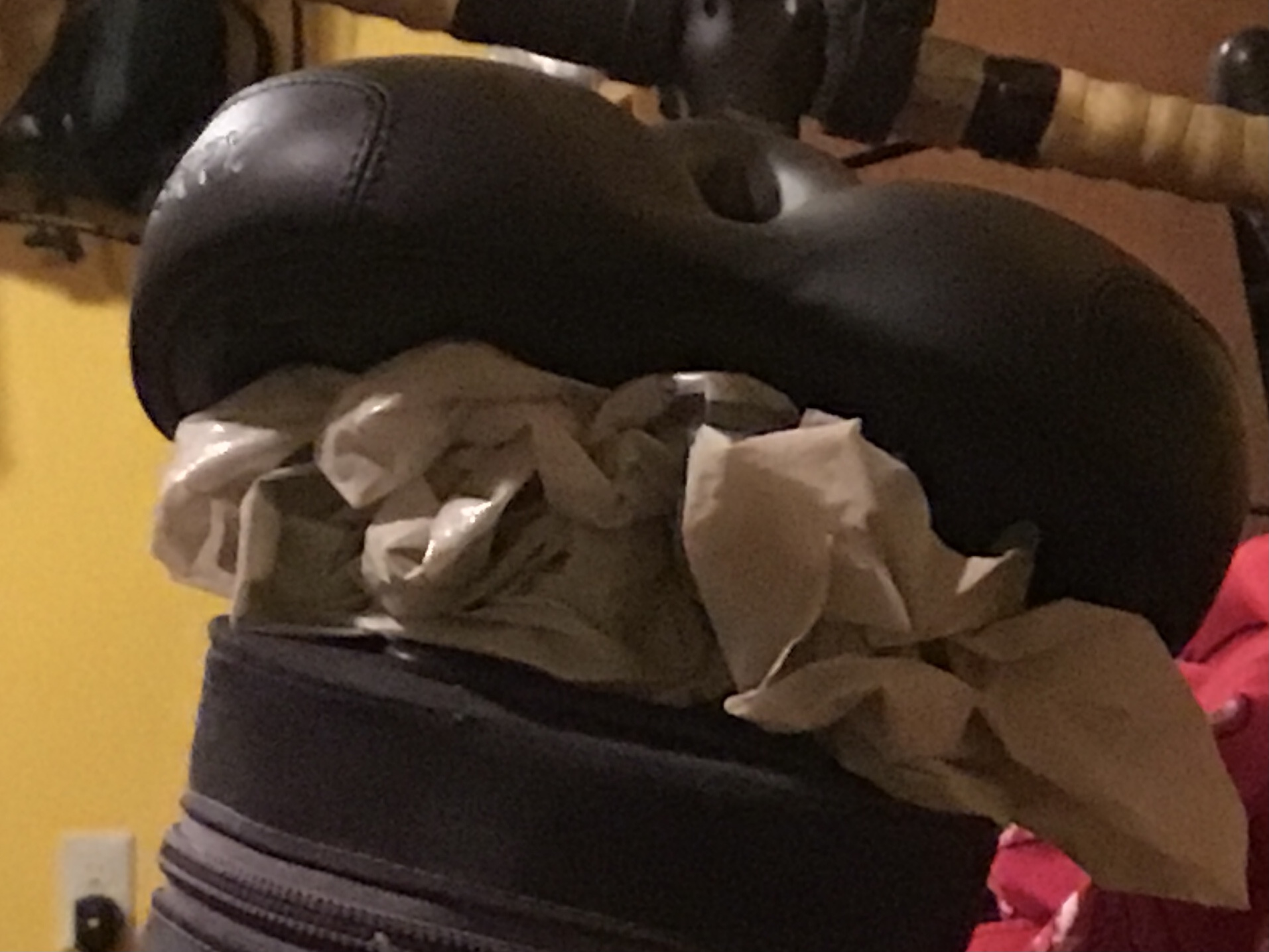 Stuff a plastic bag under your bike seat or in your backpack.  You can use the plastic bag to cover the seat if you have to leave your bike out in the rain. I still have a bunch of plastic shopping bags from when they were in use in Vermont. When they run out I will use the plastic vegetable bags most grocery stores still provide. Plastic bags are also good if you find something on the ground in the rain. Sometimes I find a wet bandana or tee shirt or some wet fruit and I put the found item in the plastic bag so the inside of my backpack does not get wet.

This past summer has been challenging because I have had a UTI and issues with my prostate.  This has made riding difficult.  In August I went to see a urologist and he said that I should stop drinking coffee and eating chocolate.  Aside from the headaches caused by caffeine withdrawal, leaving coffee behind was not as difficult as I expected.  Before the restriction, I structured my day around three cups of coffee - one with breakfast, one after lunch, and one after dinner.  Now I drink herb tea at the same time, but if I miss my tea it is no big deal. Missing coffee was not an option.  On a long ride it was essential for me to find a place to stop for coffee, but not anymore.  I also didn’t mind cutting out chocolate.  The urologist told me I should cut down on my bike riding.  That was a crushing blow.  I have many satisfying and pleasurable activities in my life, but bike riding is central to who I am, and giving it up would have been very difficult. When he told me to cut down I was getting ready to do my first ever Smugglers Notch ride.  I had been training for it all summer.  I decided to go in spite of what he said, but after that, I stopped taking eight-hour rides and was moderate in my riding.  I still went on four and five-hour rides about once a week.  In an ordinary year, as the cold weather arrives my rides gradually shorten until in the middle of winter I am just riding around town.  In early September I started researching prostate friendly bike seats. I posted an inquiry on the Vermont Bicycle Commuters Facebook page.  Someone suggest a seat made by Terry, a Burlington based bike equipment company.  I ordered one and had it installed. It feels comfortable and matches my bike better than the old seat.  I believe it is helping but only time will tell.

I use bike riding as a way of keeping anxiety and depression at bay.  My identity as a bike rider is also important for my feelings of self-worth.  I like people knowing that I don’t have a car and that I am a strong rider.  All these things seem threatened by my current condition.  In my bike workshops, I  caution people against all or nothing thinking.  It is not helpful to believe that either you ride every day all year round or you don’t ride at all.  I have trouble accepting my own advice. I want to be out there all day long and go 60-80 miles.  This may not be my reality anymore.

I have been taking some medication that seems to help.  In the third week of September, I went to my urologist and he did a procedure that enabled him to see exactly what was going on.  I told him my concerns about bike riding and it turns out he is an avid bike rider himself.  He told me that I don’t have to give up riding altogether.  It was a  relief to hear him say that.

The Flow of the Road

In September I taught an on-road bike workshop. We met at Oakledge Park. It was a beautiful cool sunny afternoon.  We rode through the park to  Austin Drive and passed by Pool World.  Someone who worked there was my kayaker when I did an open water swim in Lake Champlain.  I asked her why they sell both swimming pools and equipment for the game of pool.  She said that originally it was a store for swimming pools but so many people asked about the game of pool that they expanded their inventory to include pool tables and other indoor game equipment.  In any other language that would not have happened. After passing Pool World we took a short quirky bike path to Pine Street and headed into town.  While I am always grateful for bike paths, many of them are an afterthought and don’t serve much of a useful purpose when it comes to traveling around the city.  Bike lanes, especially protected ones, are much more useful. We went right onto Locust Street and when we got to Shelburne Road we had to use a crosswalk to get to the other side of the road so we could go down Union Street.  I went that way because the intersection was a good example of a place that has no good options for a bike rider except to become a pedestrian.

As we continued our ride into town, I was struck with how many decisions I make as I ride.  It is a  complicated dance that takes into account the constantly shifting traffic, road surfaces, street gradient, weather conditions, and the time of day.  Much of what I do is semi-automatic and it was a challenge to translate that into directions and suggestions for the other riders in our group.

We went down Union until it debouches onto North Winooski Avenue and then I showed the participants a back way to get to the 127 Bike path.

Our final destination was The Fletcher Free Library in downtown Burlington.  This was before the new bike lanes were marked on South Winooski Avenue and negotiating the left hand turn into College Street was a real challenge.  The new bike lanes have made that turn a lot easier.  At the library, we disbursed after a few final words about riding.

Late in the afternoon of September 24th, I began having spasmodic pain in my l back.  It was very hard for me to move.  I had had a similar attack the previous day, but it had gone away fairly quickly. The pain felt different from anything I had experienced before.  I decided to go to Urgent Care at Fanny Allen, on Route 15 in Colchester.  It is a fifteen-minute ride from my house in Winooski.  The doctor who saw me said that she was not able to do the necessary tests at Urgent Care so she advised me to go to the Emergency Room. I thought I might be able to ride,  but she told me to take a taxi.  It cost $14 to get from Urgent Care to the Emergency Room.  It was the most money I have spent on transportation for some time.  I arrived at the Emergency Room at around 8. Eventually, I was diagnosed with kidney stones and given some medication.  When I got the diagnosis I  thought of the 16th Century French philosopher Michel de Montaigne. He also suffered from kidney stones.  He was the inventor of the essay, a form I use in these posts.  Like Montaigne, my writing tends to be digressive.  By that time it was around midnight.  The pain had passed and I was able to walk home, which took about 45 minutes.   I got to bed at around 2 AM.

I set the alarm for 6 AM.  I had a swimming lane reserved at the YMCA the next morning and I did not want to miss swimming.  There is a stubborn streak in me when it comes to swimming and bike riding.

After breakfast, I walked to the Champlain Mill in downtown Winooski.  My plan was to either catch a bus out to Fanny Allen and pick up my bike and then ride it into Burlington, or take the bus into Burlington and then take the bus back out after swimming to get my bike.  As I was walking down the hill toward the bus stops I saw a bus headed out to Essex Junction.  It was frustrating because the plan I was hoping to follow involved getting the bike before going to the Y.  I waited for a bus into Burlington but just a few minutes later I saw another one heading to Essex Junction.  I ran across the street and caught that bus.

I got my bike from where it was been locked behind Fanny Allen and rode into Burlington in time for my swim.

Later in the day, I rode up to Niquette State Park.  The friend I was walking with was half an hour late, but I did not rub it in by explaining all that I had been through in the last 24 hours.  It was satisfying to walk and ride in spite of not getting much sleep.