During the current crisis,  I have continued to work full time at a group home for people with psychiatric disabilities.  It has been a blessing to have some structure in my week and a paycheck.  I know many people have struggled financially.  I  miss teaching classes and contact with friends.  I walk and ride.  I have not been able to swim so walking and riding have become even more important than usual.

This is a story that I was going to tell at an Irish dinner that was canceled because of the Corona Virus.  I practiced it while walking.

One warm, golden, summer afternoon, Oisín was resting in a forest glade with his father Finn McCool and their companions.  They had been hunting deer.  The smell of the loamy earth came to his nostrils and he heard the sound of birds in the trees.  After riding through the woods, he was covered in sweat, and his body glowed with health and strength.  He felt the savage joy of being alive.  Through the trees, he saw a flash of gold.  He heard the sound of galloping hooves.  A young woman with blond hair appeared riding a milk-white steed. Her great beauty made everything else pale in comparison. She seemed to be her own source of light.  Oisín said, “I don’t know who you are, but I love you and I want you to be my wife.”  She said, “I am Niamh, the daughter of the King of Tir Na Nog, the land where time stands still and nothing changes.  I have searched everywhere for you.  You are as bonny as the legends say.  I will take you for a husband, but we must dwell together in Tir Na Nog.”  In spite of protests by his father, Oisin did not hesitate.  He jumped up behind Niamh and they rode off into a cloud of mist.  They traveled through a year.  They witnessed the gathering of the fall harvest, felt the cold rains of winter, and saw the blossoming of the fruit trees in the spring. When it was summer again they were in the land of Tir Na Nog.  It was a pleasant place.  Soon they were married, and that night was pleasurable for both of them.  The following day they settled into a routine of feasting, hunting, singing, and dancing.   The next night was exactly the same  but for Oisín it was a little less pleasurable. Day followed night, and nothing really changed. After a month Oisín was bored and he also missed his father and Ireland.  He even longed for the icy rains of winter.  He told Niamh that he wanted to return home, and she begged him not to go.  He was persistent and finally, she gave in.  “You may ride my horse, but whatever you do, don’t touch the ground with any part of your body.  If you do, all is lost.”  As he rode off, she wept bitter tears.  She knew, in her heart, that she would never see him again.  It was the first time sadness had ever touched her life.  In Tir Ne Nog, there were moments of pleasure but deep feelings were unknown.  When she traveled through Ireland, searching for Oisin, something of the sadness and joy of the country had entered her soul and with it the capacity for true sorrow.

Oisin rode back through a year. The blossoming of the fruit trees greeted his eyes, he felt the cold rains of winter, saw the fall harvest and when summer came around he was back in Ireland.  All had changed.  Where there had been endless forest, now there were fields of heather.  He found his father’s feasting hall, and it was in ruins.  Oisín saw an old man building a stone wall.  Oisín asked, “Have you seen my father Finn McCool and all my companions?” The old man said, “They have been dead a hundred years and more.”  Oisín decided to return to Tir Na Nog but before he left the old man asked for some help with the stone wall.  Oisín leaned over to help, the cinch of his saddle broke and he tumbled to the ground.  The horse bolted and Oisín was transformed into a blind old man.  He wandered the land searching for traces of the ancient days.  People felt sorry for him and gave him food and drink and a place to stay.  In return, he told them stories.  His sight was gone as was his youth, but as if to make up for it, his voice became strong.  He was a powerful storyteller.

In those days, if you wandered for long enough, sooner or later you would bump into Saint Patrick. He was ubiquitous. Saint Patrick was immediately drawn to Oisín.  The Saint gave Oisín a hut to live in and every day he visited and listened to the stories of the old days.  Saint Patrick wrote down the stories and that is why we have them today.  But Patrick was a Christian so he told Oisín about God and Jesus and heaven.  Oisín said, “Are my mother and father in heaven?”  “Alas”, said Saint Patrick.  “They died before they were able to become Christians, so they are in hell.  But if you accept the Word of the Lord, you may dwell with Him in Heaven for eternity.”  Oisín said, “I’ve lived in a place that sounds a lot like heaven and it is not for me.  I will take my chances in hell with those I love.”  With a wry smile, Saint Patrick shook his head.  Oisín was the only man Saint Patrick was unable to convert.

Walking with my Father

My father was an alcoholic.  Sometimes, at night I walked with him to the liquor store.  It took about half an hour.  My mother was happy when I went with him, mistakenly believing that if I went along my father would buy beer instead of hard liquor.  We did not talk much as we walked.  I was obsessed with the shadows cast by the streetlights.  As we moved from one streetlight to the next, the shadow of the streetlight pole in front of us got shorter and the one in the back of us got longer.  My father once asked me why I kept looking behind us, but I did not tell him the real reason.  Sometimes I was frightened that a local gang of teenage boys would attack us, but that never happened.

Jaywalking is a common practice in both Winooski and Burlington.  Pedestrians don’t hesitate to cross the road anywhere as long as there are no cars coming from either direction.  While I have heard and read many angry statements about bike riders not obeying the rules of the road, jaywalking seems to provoke much less outrage.  Maybe it’s because by and large pedestrians mostly stay on sidewalks and are not seen as annoyances in the road.

I like to walk at night, especially in the winter.  The streets of Winooski are quiet, and I usually have them to myself. I feel alone but not lonely.  I like the feeling that my walks are largely unnoticed, I pass through the city leaving almost no trace.  I see the large screen televisions through the picture windows in many houses.  The images I see, without the accompaniment of sound, become mysterious.  I can only imagine what is going on.  Once in a while, I encounter another walker, often with a dog.  We seldom greet each other. Night puts a distance between us.  From the top of Leclair Street, I look out over Burlington, with hospital hill illuminated in the night.  I am grateful that I have a warm quiet house to return to. 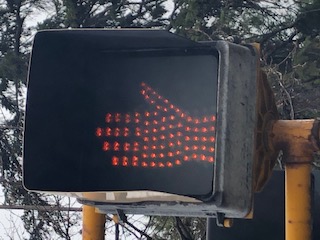 It is curious to me that while traffic lights are completely abstract, the signals for walkers are more figurative.  It is as if walkers need clearer directions than people in cars. For years I had an argument with my now ex-wife about the orange hand that indicates we should not walk.  (We did not get a divorce because of the orange hand arguments, we had other difficulties as well)  I said that visually it could just as easily be the back of a  left hand as the front of a right hand.  She insisted that it was the right hand.  She saw it as a right hand, so that is what it had to be.  In much the same way, the white walking person is usually seen as a man, although the figure is abstract enough to be of any gender.  That figure could also just be walking backward.  The white and the orange together remind me of a creamsicle, with orange sherbet on the outside and vanilla ice cream on the inside.