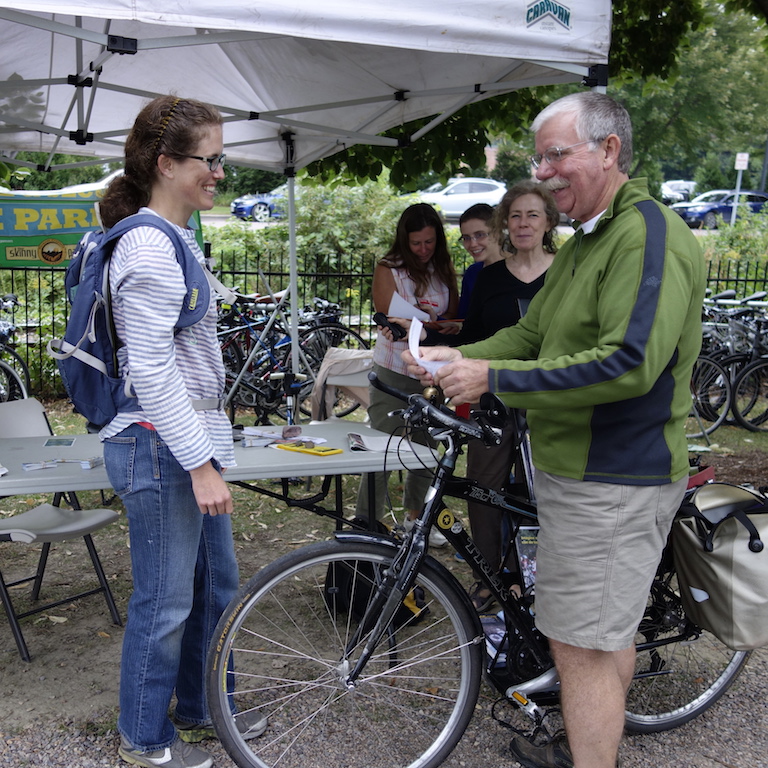 It was supposed to be just a regular Saturday morning running the Valet Bike Parking at the Farmers' Market in City Hall Park. Until I got the email from Wayne. Wayne is my friend from Montreal, who used to live in Burlington but abandoned us for "La vie francaise" north of the border.

Wayne is a member of an adventure club in Montreal and 2 or 3 times a year, he volunteers to lead an expedition of 15 intrepid cyclists by bike to our fair city, Burlington. They carpool to Plattsburgh on the New York side, take the Champlain Ferry to Grand Isle, the Local Motion Ferry to the Island Line Trail and arrive at Valet Bike Parking just after noon, leaving themselves plenty of time to enjoy the foods and flavors of the market and Church Street, all in their Lycra.

Wayne and I have come to an arrangement - after they showed up unannounced one time with little to no rack space left to park them on a very busy day. He now sends me an email a few days prior, to give me a heads up that they are coming. This time, he followed up the night before they were due to arrive with a short addendum.

There may be 50 more coming in a separate group.

Not to fear, I picked up another 8 racks to accommodate them, should they show.

With the help of Emma and Eduardo on the morning shift, we squeezed the racks tightly, leaving lots of room for the regulars and as usual hung our welcome sign on a section reserved for our Quebec compains.

As regular as clockwork, they rolled in about 12:00 pm; first a couple, then a lot, last a few stragglers, all comrades of the road by this time, sharing stories and gently teasing each other.

"Bienvenue cyclistes!" I greeted them in my fractured French.

Surprised, "You should move to Montreal" they joked.

Their bikes, some with funny names like Marinoni and Cervelo were quickly parked on the racks. A short trip to the nearby ATM's and they were ready to explore - and eat! They disappeared into the crowd of market goers, with arrangements to meet back at the Bike Parking by 1:30pm. Wayne runs a tight ship so I knew they'd be back on time for us close to 2:00 pm. As they returned, I quizzed them "What did you find to eat?"

Each one had a story to tell.

"Those sliders on Church Street!" Her eyes rolled as she recounted the pleasures of a double beef with onions.

"Scallion pancakes" said another. "Limonade d'erable" from the francophones.

Pakoras, donuts, momo's, fresh strawberries, patries, fromage and the list went on and on.

A lot of food, but they would get a chance to burn some of those calories off on they way home.

"Wait! Can I get a picture before you go?" 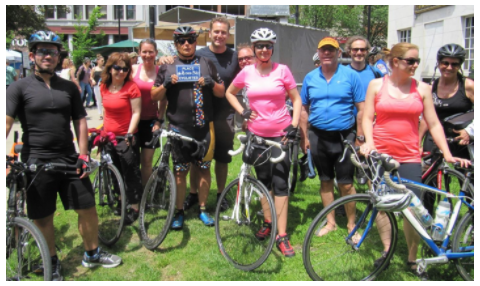 They happily obliged, holding our sign in front of the group. We got most of them in the shot - only a couple missed our lens (those in the know will spot Wayne in the background).

That left us a lot of time for the afternoon shift of Callan and company to pull the racks apart and load the bike trailer. Chris showed up to pick up the extra racks and a helpful Local Motion member who had stopped by to chat jumped at the chance to pitch in.

But what happened to the 50 cyclists Wayne had warned us about!?

Apparently some of them were spotted, but they must have not seen our signs and locked up on all the pillars and posts, or had friends watch their bikes while the others shopped. Sadly, we didn't get to give them a warm "Bienvenue cyclistes!" and show them the joys of Valet Bike Parking, Burlington style. Next time! 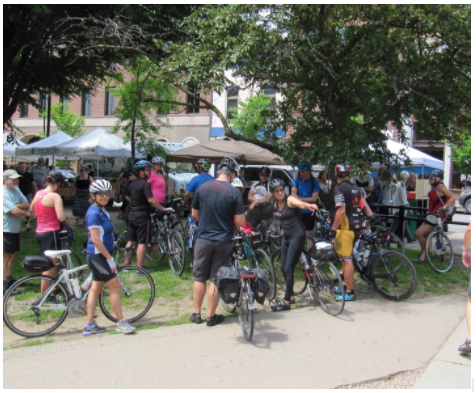