To e-bike or not to bike

I met with Spence Putnam at his beautiful home in Weybridge, Vermont on a warm sunny day in May. Wanting to learn more about Vermonters who are commuting on an e-bike, Spence was kind enough to give me an overview of his history with bikes, his commutes, and how he uses an e-bike for trips in rural Vermont.

After dropping off two e-bikes that comprise our Traveling E-bike Library at Frog Hollow Bikes in Middlebury, I traveled a few miles into the rolling countryside to Spence’s home. Spence was out mowing his lawn with his electric mower not far from his solar panels when I arrived. I could tell that independence and taking care of our planet are two priorities for Spence. We got down to business after fulfilling my curiosity about local wildlife, how long he has lived there, his garden, and the solar panels. Spence rides a Surly Cross-check—a wonderful bike for the dirt roads and choppy pavement of rural Vermont. But even with a great bike, Spence felt like he needed a little extra help for his rides.

You see, even though Spence is no longer in his physical prime with some aches and pains creeping in, which many of us can empathize with (even me in my early 30’s), he was determined to keep riding. In particular, unbearable knee pain kicks in when harder pedaling is needed on the hills. The pain gets so bad that riding a conventional bike is out of the question. Spence is retired, but only in the sense that he does not work for an employer anymore. He is plenty busy advocating for the issues he cares about, so he is often heading into town for meetings. Spence owns an electric car that he does use, but riding bikes has been a passion of Spence’s for many years, and he is committed to staying healthy and keeping a light influence on our fragile natural world. 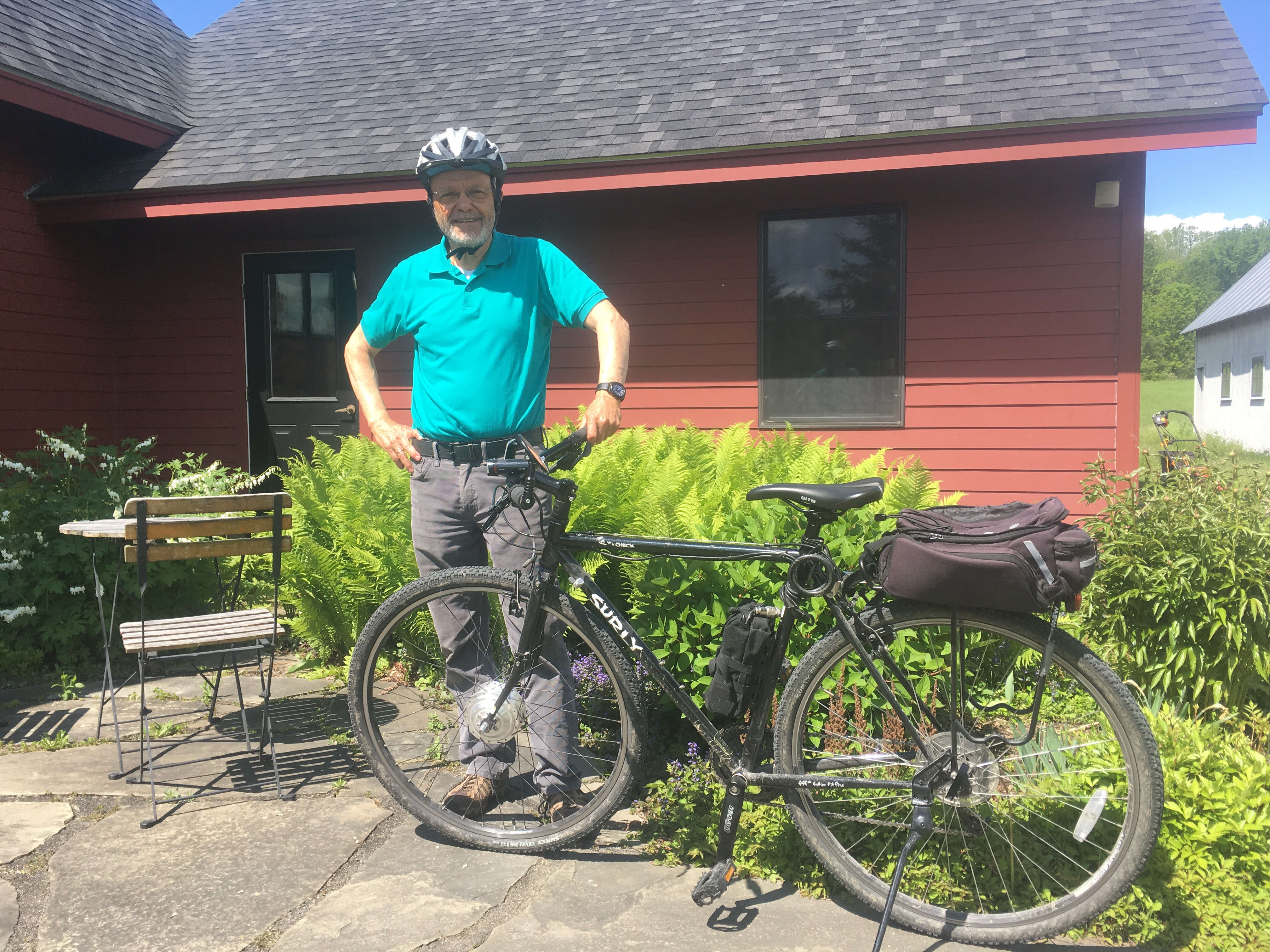 To keep biking, Spence needed to figure out a solution. He did some research and determined that adding an e-bike conversion kit to his Surly should do the trick. The kit he used is one of the simplest types of e-bike conversions. He replaced the front wheel with one that has a motor in the hub that connects to a battery that is strapped on the frame. A little throttle button rests on his handlebars. Every time he encounters a hill and that knee pain crashes the party, he simply presses the throttle button to relieve the amount of pressure that is needed to keep pedaling up the hill. The relief provided by the motor is enough to keep Spence pedaling between Weybridge and Middlebury many days of the week! Some other bonuses of the e-bike that Spence mentioned is that parking downtown is no longer an issue, which is true for any bike. The conversion kit also helps him keep up with traffic and accelerate faster, which makes biking safer for him.

I asked Spence if he would still ride a bike if he did not have the option of an e-bike. His reply was a strong “no.” The knee pain is just too much. Thanks to the bit of extra help he gets from his e-bike, biking is possible for Spence.