The Many Faces of a Single Yellow Bike 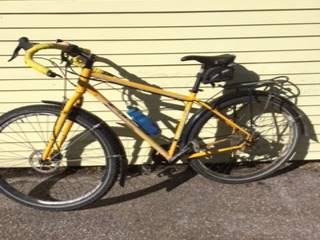 Owning a bicycle is not a static experience. As my bike riding evolves, and my needs change and so does the bicycle I ride. Most daily practices change over time, sometimes slowly and sometimes quickly.

About five years ago I bought a bright yellow Salsa Fargo. It has turned down handlebars, brake shifters and thick mountain bike like tires. Soon after I bought it, I had fenders put on, so that riding in the rain would be a more pleasurable (and dry) experience. After about a year I decided that I wanted to give single track riding a try. The fenders that had been keeping me dry now became a nuisance as they banged and banged, so I had them removed. Eventually, I decided that mountain biking was not for me, but I decided to keep the fenders off the bike and to always ride with waterproof pants when the weather was wet.

Another year passed and I realized that with the addition of studded tires,  my Salsa, would make a good winter bike.  So I began to run studded tires in the winter and switch back to the original tires during the other three seasons. One winter I bought really warm mittens only to discover that when on, shifting the bike with brake shifters was very difficult so that summer I had the shifters changed to bar end-shifters. This winter I have had no problem changing gears while wearing my warm mittens. After some wet slushy rides, I decided to havethe fenders put back on, coming full circle. In putting the fenders back on, I had another realization. With non-studded tires and fenders, the yellow bike would make a fine three season wet day commuter bike. In the years since my initial purchase of the yellow Salsa, I have acquired another one, a Marrakech, which I currently use for non-winter commuting and dirt road recreational riding.

I will confess to having three bicycles. The third one is a lightweight road bike, which I use for longer paved road riding. Each of the bikes serve one or more purposes, and when I change how I use one bike, the other bikes shift around as well. You know the formula for how many bikes you need, right -- N+1. N  being the number of bikes you have right now and 1 being the bike that you currently have your eyes on. Recently, I have been tempted by fat bikes, but for now, three is enough.