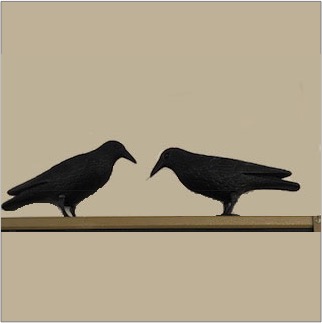 Because there is no enforcement of bike laws, we are forced to create our own rules. I used to think of us as knights errant, as warriors with a personal code of conduct, but the people in cars are the ones encased in steel, not bike riders. We need to be flexible. Honor is not as important as survival.

As bike riders we are weaker and slower than people in cars. However, our relative weakness can be transformed into a strength because we are more flexible and versatile than cars. We are the tricksters of the road. We can go on sidewalks, occupy the space between cars and the curb and get off our bikes and carry them. This gives us a certain advantage in negotiating the streets of the city. But because we are not cars or pedestrians we don't own either the streets or the sidewalks. Being a trickster can be dangerous. We have to be extra careful and visible. I use my front and back lights even in the daytime.

The law views us as cars but we are not cars and not given the same privileges as cars. Although it is improving, our needs and safety on the road are at best an afterthought, if considered at all. Also, we are not allowed on highways, and practically speaking, there are many roads in Chittenden County that just don't have enough room for safe biking.

For this reason we sometimes bend the rules, much to the disgust of car drivers. Let me hasten to add that car drivers also bend the rules, especially when it comes to giving bike riders four feet of space, talking on cell phones, running stop signs and obeying the speed limit.

I embrace my bike's flexibility and in-betweenness. When there was construction recently on South Union Street and the road was closed, I went on the sidewalk but when I saw a man walking a dog, coming from the other direction, I got off my bike and walked. Being flexible doesn't mean that I am discourteous. I still maintain a code of conduct but that does not include a slavish adherence to rules that were not made for me. I used to always wait for green lights, but now I wait for the walk signal on corners that have it. I go on the walk signal because it means I can get ahead of the cars and as a result I am more visible and safer.

Part of the reason bike riders bend the rules is lack of infrastructure. In cities where bikes are given full, safe access to the streets, bikes by and large obey the rules because there is no reason not to.

As riders we develop alternate routes, which are sometimes elaborate and include riding briefly on sidewalks or even cutting through private property. If the main roads were safe to ride on, we would probably not have to be so creative. Bike riding is more and more common, we are not longer a breed apart, but we are still marginalized. I believe that this is changing, in part because of the excellent work of organizations like Local Motion.

Another way in which bikes and riders are in a liminal situation is explained below... by the Sargent in 'The Third Policeman' by Flann O'Brien.

"The gross and net result of it is that people who spent most of their natural lives riding iron bicycles over the rocky roadsteads of this parish get their personalities mixed up with the personalities of their bicycles as a result of the interchanging of atoms of each of them and you would be surprised at the number of people in these parts who nearly are half people and half bicycles.

And you would be flabbergasted at the number of bicycles that are half-human almost half-man, half partaking of humanity.

The policeman in the story thinks the bike/human interchange is a problem, but it is cause for celebration. As hybrids we will be ever more nimble negotiating a city not made for us. "

-the Sargent in 'The Third Policeman' by Flann O'Brien.