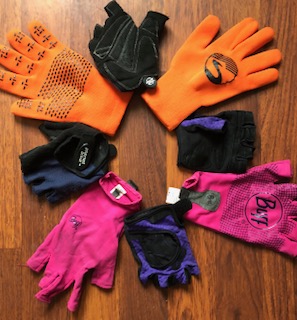 Every once in a while, during a ride, I interact with someone as I am passing by. Being on a bicycle means that the interactions are brief, I think of these little scenes as mini-plays with only one short act. Here are a few of them:

On Discovery Road in Colchester I passed a mom with her little girl. They were standing at the end of a driveway. The girl was about five years old. She was pushing a bike with training wheels. I said to her, "Do you want to race?" Her mom said, "Not yet, she is still in training. Come back in a couple of months."

On Old Stage Road in Essex, a Dad was pushing a little girl on a small bike. He said to her, "Are you sick of biking yet?" As I rode by I said, "How could anyone ever be sick of biking?"

On different day, on Old Stage Road, I saw a man at the Essex Country Club. He swung his club and hit the golf ball and then grimaced as he turned away. I said, "It wasn't that bad." He said, "It was that bad."

This interaction took a little longer --

In June, while taking a break from a ride, I was at the Maplefieds store in Georgia waiting to use the bathroom. I was behind two guys who had ridden in on Harley motorcycles. The bathrooms are single occupancy and the men's room was occupied. After a few minutes, the first guy in the line kind of shrugged and went into the women's room, which was empty. The other guy turned to me and said, "Both bathrooms are pretty much the same." I said, "Yes, they should be gender neutral." After the first guy left the woman's room, the guy I had been talking to used it and finally it was my turn. I wonder if I would have used the women's room if I had been the first in line.

Most of my attention is focused on what I see and the physical sensations of riding but sound also plays a big part in the riding experience. I never listen to music or recorded books while I ride, I would find that too distracting. I also don't recite poetry or practice stories. I do those things when I am walking. In traffic I listen for the cars behind me, especially when I am getting into position to make a left turn. Cars are remarkably loud and when there is no traffic, other sounds emerge - birds, running water, the wind in the trees. Occasionally, when I stop for a break on the Burlington Bike Path, I can hear the sound of trains from the New York side of the lake. Once in a while, when there is an exceptionally warm day in December, I get to take a long ride through the countryside. I feel warm enough but the experience is always strange because the bird songs of summer and fall are missing. There is a kind of dissonance between the weather and the lack of birds.

After many years of riding a bike, my legs usually feel strong. At 62 I can do a six hour ride without too much trouble. By the middle of the summer, after many long rides, pedaling on level ground is almost effortless. This is a wonderful feeling. Because weight is so important when it comes to bike riding, I keep mine between 140 and 145. If I go over 145 I eat a little less the next week, if I am under 140 I eat a little more. Even with a lot of physical activity, I still have to watch what I eat.

On some rides old aches and pains present themselves. My back gets sore, my left knee aches, my left wrist hurts or I get twinges in my right ankle. Usually I can ride through the discomfort. I also have physical difficulties that are not related directly to riding a bike, but can affect the ride. I get headaches and feel dizzy. Sometimes I have diarrhea and have to take anti-diarrhea pills.

Just as we are different people in different social situations, we have many different bodies that manifest themselves as we begin an activity. This switching of bodies is largely automatic. My swimming body is not like my riding body. When I get ready to ride, my bike body starts to emerge and is fully present when I start to pedal. There are different kinds of bike bodies as well. I have one body that I use when riding around town, and another one for my road bike and a third one for long rides on dirt roads. I wear bike gloves even for riding around town, because putting them on helps me manifest my bike body.