I have an old pair of Pearl Izumi winter bike tights that have a zipper at the bottom of each leg. One of the zippers broke and this presented a problem. The tights are second hand, so I did not feel that I could return them to the manufacturer. Having a seamstress replace the zipper would be expensive and my sewing skills are not up to replacing a zipper myself. The tights are very warm and aside from the zipper, in good shape. I did not want to get rid of them. I needed a way to keep the lower part of the tights closed. I could have duct taped them shut, but that would make it hard to put them on and take them off. The most obvious solution would be to tuck the tights into my socks. This would work, but I wear long underwear under the tights and I need to tuck my long underwear into my socks so the long underwear does not ride up under the tights. I tried keeping the tights closed with rubber bands, but that left big gaps. The same thing happened when I used metal pant leg cuff clips. Then I remembered a pair of footless wool socks that I bought a couple of years ago when Eastern Mountain Sports was going out of business. They proved to be the perfect solution! First I tucked my long underwear into my socks, then I put on my tights and finally I pulled on the footless wool socks. They kept the bottom of the tights secure and also provided an extra layer of warmth. I was very pleased.

I use duct tape for minor repairs and bike modifications. My bike seat is starting to lose its outer layer and duct tape helps keep the seat together. I also used duct tape to repair a bike rack and thicken the rack tubing so a rear bike light can be more securely mounted. I have a nice pair of wool glove liners, but the pointer finger of each glove kept wearing out, in spite of repeated sewing. I put red duct tape on the tip of each glove pointer finger. It seems to have worked. I also use duct tape to repair small holes in my wool long underwear. If you catch the holes before they get bigger you can extend the life of the long underwear. 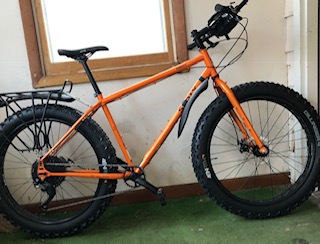 The general rule for how many bikes you need is N+1. N stands for the number of bikes you have now. You always need just one more, and then of course a new N+1 kicks in. Desire is endless and there are always more beautiful machines available. Last year I decided not to buy things I don't need. The plan simplifies my financial life although there have been exceptions to my self imposed rule. I did accept a three month Audible deal, even though I don't really need to listen to recorded books. I consign items at Outdoor Gear Exchange and I have a gift certificate there. In January I bought a buckle to repair a backpack, and also a pair of merino wool long underwear. I needed the buckle but I did not, strictly speaking, need the long underwear. It was such a good deal at $13 that I gave in to temptation. They were size medium, which is usually my size, but this pair was loose at the waist so I folded over part of the back waistband and sewed it together. I think that will work. I also have store credit at Battery Street Jeans and some Amazon points. With those resources I let myself buy things that I want but don't necessarily need.

I have a Salsa Fargo for daily commuting and some winter riding, a Salsa Marrakesh for dirt road riding and and a Ottrott carbon-titanium road bike. A friend of mine took me mountain biking a couple of years ago. Although I was riding a nice bike, I spent most of the ride walking. Mountain biking scares me! I don't have any desire to buy a mountain bike. I have also been tempted to get a cargo bike, but most of my hauling can be done on my Fargo and when I need to do a big shopping at Costco, I use CarShare Vermont. Up until the late month, I thought I was immune to the N+1 rule. I was happy with the bikes I owned. Then I experienced again the frustration of trying to ride into town on icy, snowy roads after a big winter storm. Suddenly I felt that getting a fat bike might be a good idea. Old Spokes Home was having a sale and I tried out a bright orange Surly Pugsley. I rode it around the block on icy sidewalks and knew that I had to have it. I brought it home the next day. Now I laugh haughtily at most bad weather.

My Connection to the Bicycles

I have never felt passionately attached to any of the bikes I have owned. For me they are elegant tools for transportation, but if the occasion arises I could replace any of them without regret. I feel more of a sense of gratitude toward my bikes than a strong attachment. This may be because I think of my bikes as part of a complex system for moving through the world. Where the bicycles ends and where the rest of the world begins is not always clear. For example, is the air in the tires part of the bike, or not? As air slowly leaks out of the tires and is from time to time replenished, the air in the tires changes. There is a constant circulation. In that sense it is as if the bike is slowly breathing and part of the bike is always changing. I change components once in a while, and repairs mean that various parts of the bike get replaced. Is the 'true' bicycle just the frame? A bicycle only functions as a result of a number of factors including the road system, the body and skills of the rider, the mechanics who fix the bike, the laws of physics and the rules of the road. It seems silly to be overly attached to a bicycle.

What I am reading can affect how I ride. Last summer my weekly discussion group read 'Don Quixote' which is about a man trying to return to the lost days of chivalry. He wanders around with his servant Sancho Panzo. In honor of his questing style, I did a couple of rides in which I just wandered, not having any particular goal or route in mind. That is not my usual way of riding. I typically have my route planned before I leave the house. I ended up in Williston a couple of times, riding around in developments. I saw some places I had not seen before, but also encountered some dead ends. I did not really enjoy that wandering style of riding. This past fall our discussion group read 'Moby Dick.' As you know, eponymous book is about the quest for Moby Dick, the white whale. I did not go looking for whales, but I did go on coupon rides. I bought a coupon booklet from Vermont Businesses for Social Responsibility and rode around redeeming coupons. I went to Waterbury Center for a free cup of coffee and North Ferrisburg for a free cookie. My quests were not as epic as Ahab's, but they also didn't result in any ships sinking.

Our reading group's next book is 'Life A User's Manual' by George Perec. It is a book about the interlocking lives of people living in an apartment building in Paris. Perec was part of a group of writers called Oulipo. They created writing based on certain constraining rules. Perec wrote a book without the letter "e" which is just crazy considering how often "e" occurs in French. They also created short texts with the rule N+7. Every noun in the original text, is replaced with the noun that appears seven words further on in the dictionary. They did this with beginning of Genesis, with interesting results. Many years ago I tried walking with the the rule that I would take alternate right and left turns. I can imagine other kinds of constraints that might be used to construct a bike ride. For example I could flip a coin to decide about right and left turns. So far I have not done any Oulipo inspired rides.

On a long ride, when I stop for a break, I read online articles and books or listen to recorded books on my phone. I have a vivid memory of listening to 'Transit' by Rachel Cusk while drinking coffee behind the Saint Joseph Church in Grand Isle. I also automatically read the signs I see, even if they don't contain any useful information. There are a few signs that I always enjoy, including the one that says, 'Welcome to Grand Isle Beauty Spot of Vermont'. Who knew that Vermont was a body that has a beauty spot? I also like the sign that says, 'Safe Journey'. This sign sends you forth from Milton on Middle Road. When I am riding in unfamiliar territory I read paper maps which I prefer to maps on my phone. I also 'read' road surfaces, especially when there is dirt or in snow and ice. I wish I could read the countryside in greater depth, but I do not posses the geological, historical and natural history knowledge to do so. I could acquire that knowledge but I am too lazy.

I enjoy writing about bike riding. I am a digressive thinker, so having a focus really helps. I keep coming up with aspects of bike riding that I have not yet investigated. Writing helps me clarify my ideas about the biking life. I am a passionate amateur and mostly write from my own experience. Once in a while I read about bikes but I have not delved deeply into the history of bike riding or the technical aspects of bike repair and manufacturing. I am a bit embarrassed when other riders ask me about my wheel size, because I can never remember what it is.

I have tried other kinds of writing, but only in a very informal way. I send out autobiographical essays to a group of friends, but I have done this less frequently of late.

I write every morning for half an hour, after having coffee with bread and honey and peanut butter. During that half hour I also work on my journal and write stories and essays.