The elements have to be just right for a fun winter road ride. The roads have to be clear of snow and dry, because the bike I ride for pleasure has no fenders. The temperature has to be above 35 degrees with no rain, I have to have time to ride and it has to be well before dark. In December, when the sun is setting at around 4, just finding enough daylight is a challenge. On December 21st, all the elements came together and I was able to take my first fun ride in quite some time. I have been riding daily for practical purposes and I am in good enough shape to ride for two hours without any difficulty. I went on my usual short ride route -- from Winooski through the Intervale to Mallets Bay, then the Colchester Bike Path to 2A where I stopped at the Burnham Library to use the bathroom and get some water. I went on Depot Road, Sand Road and Gentes Road which took me back to 2A. I circled back to Suzie Wilson Road and then rode through Fort Ethan Allen and Saint Michael's to get back to Winooski. There was a moment, on the Colchester Bike Path, overlooking Mallets Bay, when I felt that opening up of the mind and body that is one reason I ride. It is a feeling of spaciousness and joy, a sense of freedom difficult for me to achieve in other areas of my life. One of the pleasures of riding in the winter is that you can look through the woods and see things that are blocked by the leaves in the summertime. I see houses and sheds that are invisible during the warmer months. Last summer I photographed wild flowers. This spring I will start photographing abandoned sheds and barns. I saw two good sheds on my ride. Even on warmer winter rides, I don't take photographs because my hands get cold easily, even with gloves liners on. That is why my photography project will start in the spring. 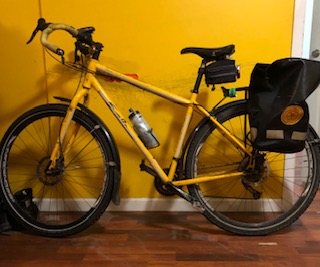 In the winter, when I get home from riding, I bring my bike into the front porch so that it can dry off from the snow or rain. Later I bring the bike into the house. There are many advantages to having an inside bike. It is easy to put more air in the tires or lubricate the chain. The bike and the bike lock dry throughly every night. Last year when I kept my bikes out in a shed, my lock got wet in the rain and then froze overnight. It was really hard to get open in the morning, and from then on, when it got really cold, the lock was hard to use. The biggest advantage in the winter is that you can leave the house with both you and the bike warm. In single digit temperatures, even with glove liners on, my hands quickly get cold if I have to unlock my bike and put my lock in my pannier then close the pannier. It also takes some time to put on my bike helmet and switch on my lights. Once my hands get cold, they don't warm up again until I am inside.

When I teach winter bike classes I tell participants about the importance of the indoor bike, and I suggest that if necessary, they may have to get rid of a roommate or a spouse to make room for the bicycle. It it just a matter of getting ones priorities straight.

Cars present the real danger for bike riders but It can be annoying when too many pedestrians and bike riders are using the same recreation path. Last year, in early October, on the holiday weekend, I took the Colchester Causeway to the bike ferry. It was a cool gray day and I thought that the weather might keep others away, but the Causeway was crowded with riders and walkers of all ages. I don't go very fast, but I do go faster than most causal riders, so I passed others bike riders. People coming the opposite way often drifted into my lane and only looked up at the last minute. Riders and pedestrians going my way did not stay over on the right hand side. It was no fun. If we suddenly had as many bike riders as we have car drivers, chaos would result and it would be frustrating to ride a bike. There will be more riders as time goes on and infrastructure and bike riding culture will have to keep pace.

I see other bike riders most days. There are still few enough of us to stand out among pedestrians and cars. I know a handful of people to wave to, the rest are strangers. Some riders are slower than me, some faster. There is one particular man who seems in a great hurry and he is always passing me in town. It is usually when I am on my commuter bike, loaded down with stuff. Also, in the city, I see no need to ride fast. Sometimes he passes me on Riverside Avenue. I confess that I fantasize about seeing him when I am on my road bike. Then I would leave him in the dust! This is unlikely to happen because I rarely ride my road bike in town.

By being involved with Local Motion and Old Spokes Home, as well as online groups, I have come to feel that I am part of the bike community here in Burlington. It is a good feeling. Many of the things I love to do are solitary pursuits. I usually ride, swim, do yoga, read, and meditate alone. I try to add some group element to each of those activities, so I don't feel isolated. Teaching bike classes and going on occasional group bike rides keeps me in direct contact with other bike riders.

As the weather gets colder, I see fewer bike riders. Many people stop when the roads get icy. In the late fall the Church Street Marketplace and City Market remove some of their bike racks, which makes things just a little bit harder. That said, during the first real snow storm of the year, in late November, I saw four other bike riders on my way to work. This would not have happened every a few years ago. We are making progress!

There are more and more electric bikes on the roads. They are great for people who would not ordinarily get out on a bicycle. For people with disabilities they are a godsend. I prefer to ride a regular bike. I find it very satisfying to utilize only human power. I can't imagine engaging in any sports activity in which I did not provide the power myself. The question is whether electric bikes should go everywhere that regular bikes go. I am leaning toward use on the road and recreation paths but maybe not on single track trails. In early November I saw a man standing by his electric bike on a trail in the Intervale. There had been rain the day before and the trail was muddy. The man had skidded on his bike and now the fender was rubbing. He had just fixed it with a dime embedded in a stick. Very creative. I offered to help but he was fine. I wondered if having an electric bike made it too easy to go fast on a slippery trail.

Although I have not experienced extreme road rage recently, I still get angry every couple of days. I just don't chase car drivers down so I can yell at them. I have done that in the past. Recently a white truck cut me off on Riverside Avenue by taking a right onto Intervale Road. The driver turned into a driveway on Intervale Road and I resisted the impulse to follow him and have a little discussion. I also worked on not spending the next fifteen minutes on revenge fantasies. On a regular basis cars come too close or start moving at a stop sign before I have finished crossing. Riverside Avenue heading into Burlington is a challenge in the morning. At the top of the hill I turn left onto either Hyde Street or North Winooski Avenue. If it is after 7 AM, traffic gets heavy and it is hard to get into the left lane to make my turn. I often have to stop on the right side of the road and look back until all the cars have passed. Then I can get into the correct lane. This is not pleasant, especially when there is snow on the right side of the road and I have less space than usual. Given a choice, I prefer to ride on car-free roads. This happens less and less frequently in Chittenden County. New homes and businesses are going up all the time, and there is more traffic than ever. The infrastructure for bikes is still patchy.

I am glad I do not own a car. Once in a while I use a Car Share vehicle but mostly I ride, take the bus or walk. When I do get behind the wheel of a car, I find myself instantly returning to car consciousness. Recently I was driving in town when I saw two people approaching a crosswalk. Instead of slowing down I sped up to get through the crosswalk so I would not have to stop. It was automatic, I didn't even think about it. We change who we are when we change from rider to driver .