The Joy of Finding the Right Bike for Your Body

I work for a bike organization, and until a week ago, I didn’t really enjoy biking.  For me, biking has always been more theoretically fun than actually fun—there was fun, sometimes—, But it occurred in brief snatches gleaned from a trip like chocolate chips in a particularly fiber-filled trail mix. For me, biking is hard work, requires a lot of concentration, and I always felt a little like I was skating on the edge of a painful disaster.

Lately, though, I have been biking every single day, and it has been an undiluted joy. I’ve been thinking about why that is, as I compare the stark difference between how I feel now and how I’ve felt in the past.

I have a hearing impairment, which also affects my balance. It took me a very long time to learn how to ride a bike when I was a child. I don’t think I will ever forget the day I finally had a successful “first flight” on my bike. It was a major achievement for me, and because it was such a hard-won skill, I enjoyed bicycling out of sheer determination to enjoy bicycling.

But it wasn’t really fun. I thought I had gotten the hang of the whole biking thing—I didn’t have to consciously balance, I could handle my bike pretty well, and when I was in good shape, I could go long distances.

I tried to find ways to incorporate biking into my life through a series of well-intentioned bike purchases. A couple of hybrid bikes, one poorly thought-out purchase of a beach bike (that upright seat position is adorable and all, but literal hell up a hill), and one folding bike. I just never could get into it in a meaningful way, and the reasons I came up with always felt like lame excuses.

Then, came my daughter. I really wanted to go biking with her, but with my balance problems, I didn’t feel comfortable putting her on the back of a bike, given the lack of confidence I already had in my own uprightness when I was solo.

I’ve never liked bike trailers. I see how people drive, and I had no interest in towing my child behind me where I couldn’t easily maneuver her away from an inattentive or speeding driver.

It looked like my best solution would be a cargo bike with a lot of stability.  Probably a tricycle, with a basket in front for a child to sit.  I have always liked bakfiets style bikes, with their signature big box in front, which is handy and eye-catching. 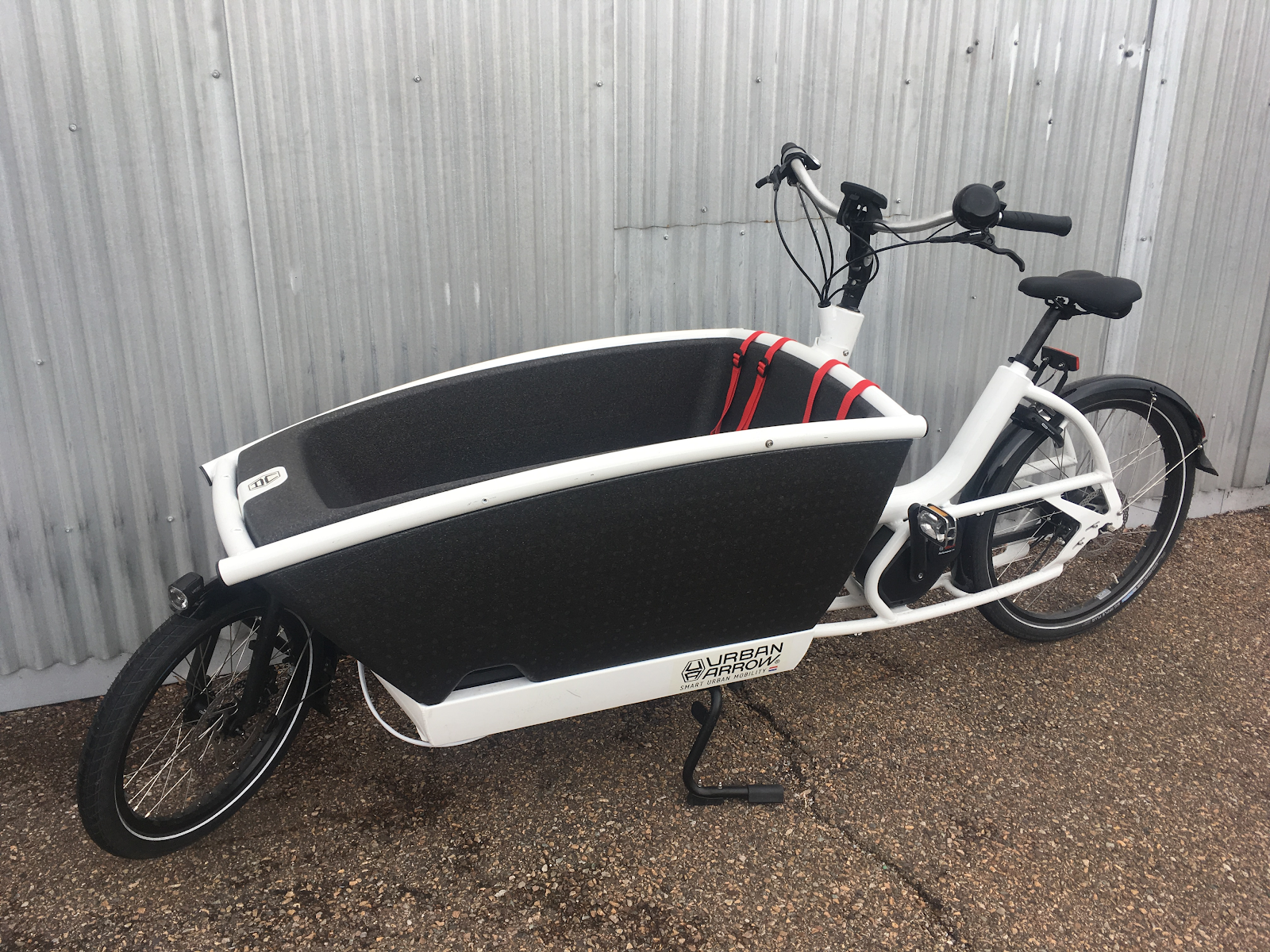 I was very nervous about making the jump to a cargo trike, since I wasn’t able to test one out in person, and these would be a significantly bigger purchase than the second-hand bikes I’d purchased in the past with a bit of leg work.

Local Motion has an e-bike and cargo-bike lending library where folks can try out a bike before they buy it,  which is where I learned that a two-wheeled bakfiets style bike is Not For Me At All. I almost wish my co-worker, Jonathon, had taken a video of the trainwreck that was me attempting not to crash that thing into literally every object I passed, because I’m sure it was hilarious, but we don’t currently have a cargo trike that I could test-ride.

Not having any idea if I was going to peter out on this bike like I did with all of the others, I asked questions in Facebook groups and found reviews online about various styles of cargo bike, and what I saw was very encouraging.  I went with a company that had a modular version, as well as an excellent price point, and good reviews on safety.  Knowing that it was a beefy beast (70 lbs unloaded, 100 lbs with my 3-year-old in it), I was uncertain how my asthmatic lungs would handle the hills with 100+ extra pounds to pedal, but my research indicated that I could likely manage this bike, and if it did turn out to be too much for me to pedal, I could invest in an e-bike kit, get some (free!) support with finding the right kit for my needs from Dave Cohen at VBike and that would solve my problems entirely.

So, I braced myself, took the plunge, and bought myself a cargo trike.  With the two wheels in front, it makes it significantly more stable than a two-wheeled bike and more stable on turns than trikes with the two wheels behind. The cargo box in the front has a seat for a child, and plenty of room for additional gear (folding chairs, picnic lunches, towels, snacks, water bottles, extra clothes, sweatshirts, fun road finds, you name it.) I put in a lot of time looking for a private seller (who would work with us to do a physically-distanced transaction) to get the bike at a price point that felt reasonable given that I was gambling.  Again.

(I found one new-in-box!) Bike assembled, I tried it out while it was empty. From the first pedal stroke, it was a revelation. Until then, I had no idea how much energy I expended trying to keep myself upright on a bike until it was taken out of the equation. No idea. It was literally one of the most joyful experiences of my life. I spent some time getting a feel for how it handled, and then put my daughter in it and went for our inaugural ride. 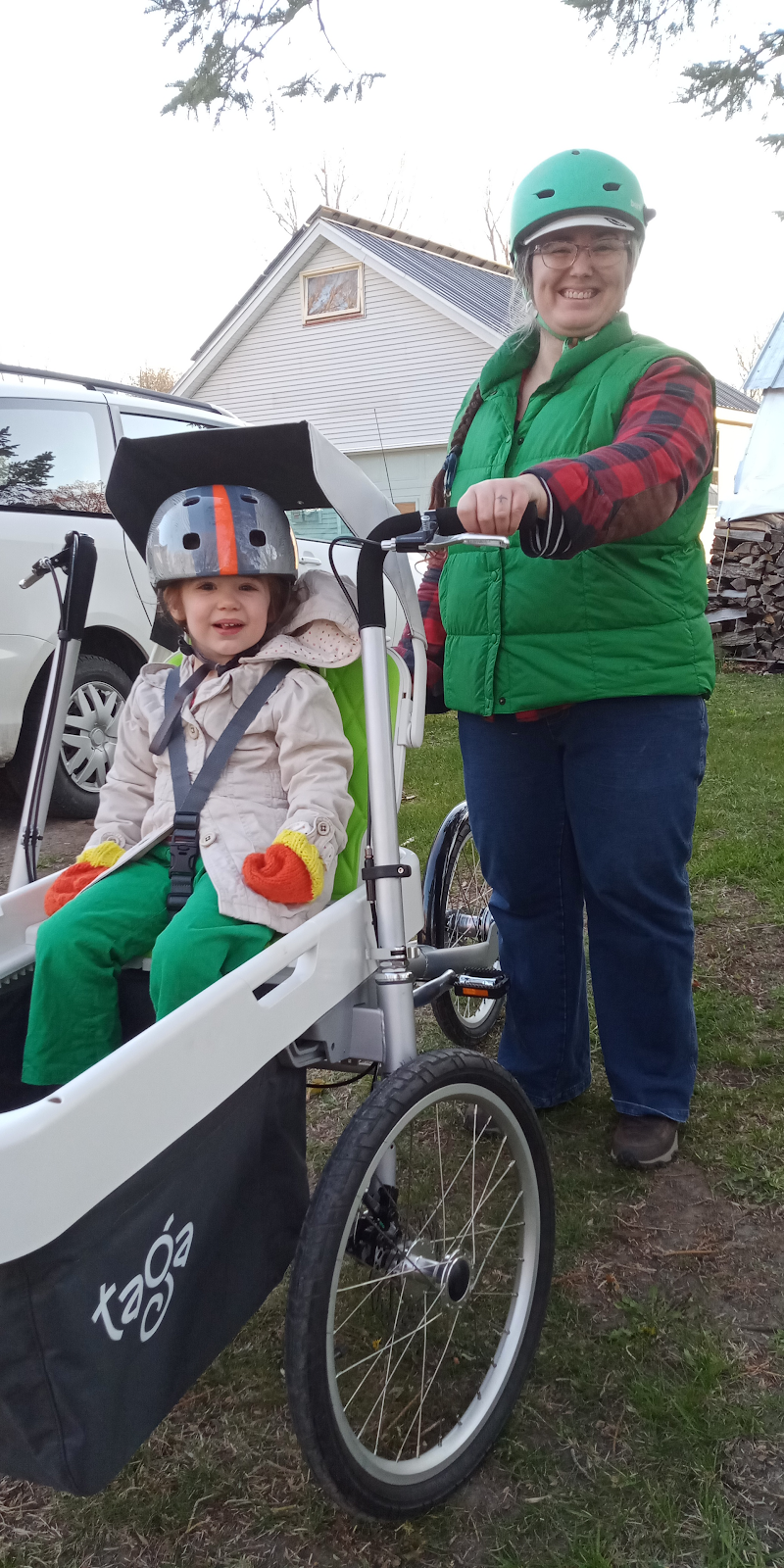 CAPTION: Our very first ride!  Better even than I could have hoped!

Hills? Fine. Really. Even with the additional weight, I was fine with the hills. Mainly because I was able to bike as slowly as I wanted. In this bike, you can’t ever go so slow that you fall over. You can’t. Suddenly, I was no longer having to stop halfway up a hill and resignedly push the bike the rest of the way up (well, mostly. I have to get back into shape).

I’m finally able to really see the world around me—in the past if I wasn’t constantly looking ahead of me (aside from mirror checks and shoulder checks for cars), I would very quickly lose my balance and risk a nasty fall. It was a constant threat. Not anymore. The world has opened up on my new bike. We’re seeing snakes, discovering new landmarks, stopping to admire beaver dens, smelling the wind off of the lake—all of it. I have space to enjoy my ride. Biking is, suddenly, truly fun. It’s all I want to do now. I actually get it—that absolute love of biking that I see in my colleagues, and it’s powerful. 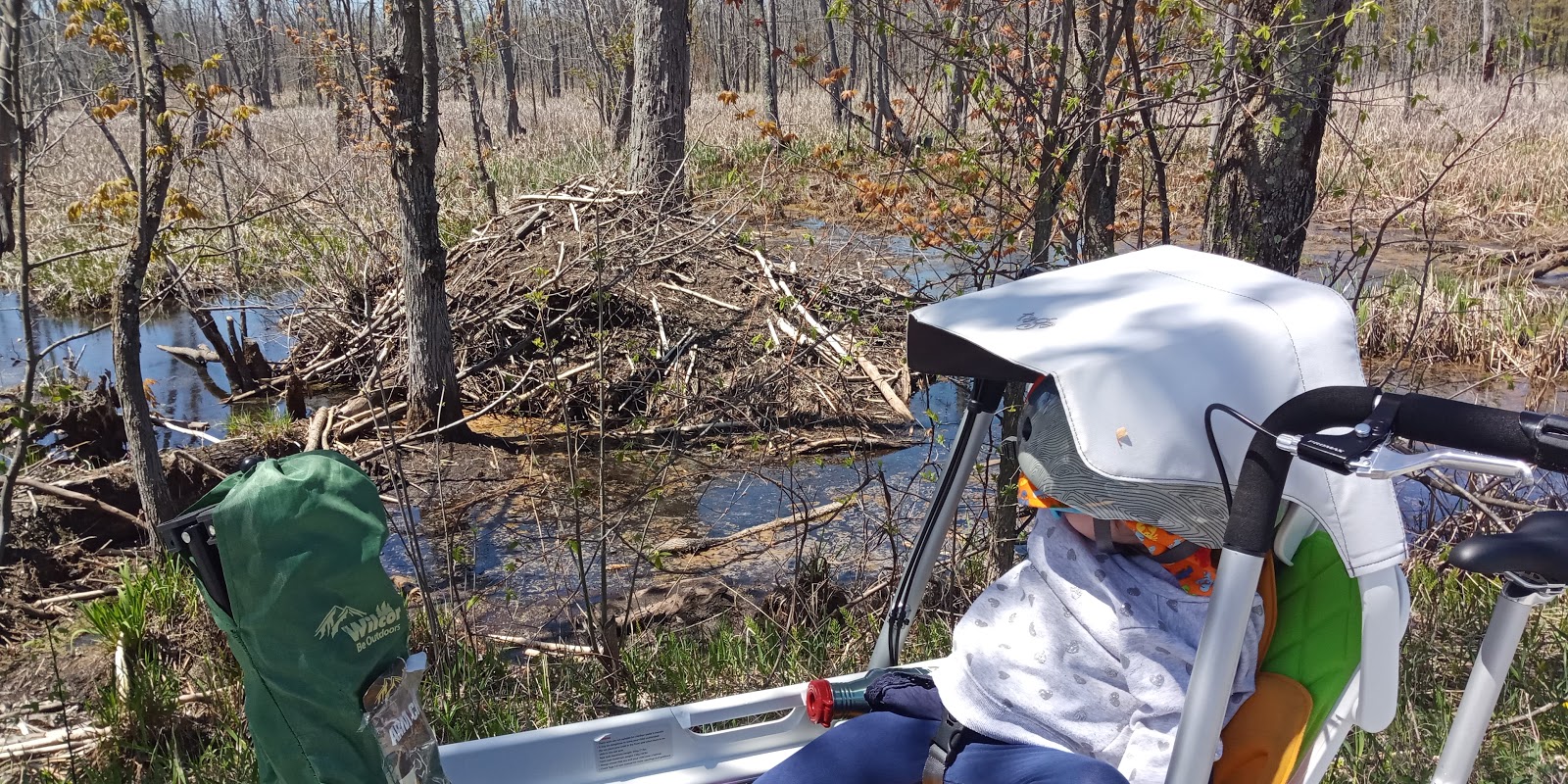 CAPTION: Admiring a beaver den (with a backward sweatshirt to stave off the wind)  Note the folding chair in the front of the cargo box.  We also had a towel, a picnic, sunscreen, water, extra clothes, and a piece of beaver-chewed wood in that cargo box with yonks of space left over.

This bike has entirely changed how I feel about riding bicycles. I finally get that endorphin high that everyone raves about. I look forward to riding every single day. I absolutely cannot get enough of riding around my town on my awesome bike. That’s also because I feel safe on it: The bike is pretty wide, and it’s forced people driving past me to give me a lot of extra space while passing, which, I’m not going to lie—is a delightful side-benefit.

All of this to say—the equipment you are using matters.

Sometimes, when you have a disability, you don’t quite know where the line is for why you’re having a hard time doing something. Is it just a lack of skill? Is it the disability? Is it the wrong mental attitude? Maybe this thing you’re doing is just not for you.

Since disabled people are a minority—I know maybe a handful of people my age or younger who wear hearing aids—we’re surrounded by people who easily do things that are very very hard for us, and for many of us, we can’t quite gauge just how much easier it is for them than it is for us. There’s a lot of subtle pressure to try and overcome a disability, and a shocking amount of pressure to make sure your disability doesn’t inconvenience other people. This translates into a feeling that you should figure out how to be entirely successful at something that is very hard, and if you continue to have difficulty doing it, then you’re not trying hard enough.

I thought I was being a wimp about biking, and that my difficulties with it were just me not trying hard enough. If I just got fitter, or practiced more, or worked harder, or just got over myself, I would finally enjoy biking. I mean, I could bike. It wasn’t like I was falling over every time I got on it (just always almost falling over the entire time I was on it.) So, I was pretty sure the problem was just me. I wasn’t doing something right.

Turns out, the problem wasn’t me. The problem was that I was using the wrong bike. Adaptive gear—whether it’s a hearing aid, a wheelchair, glasses, or a bike that will not tip over—is as vital a part of making it possible to be successful at something (and vitally: enjoying doing it) as developing your skills and ability. 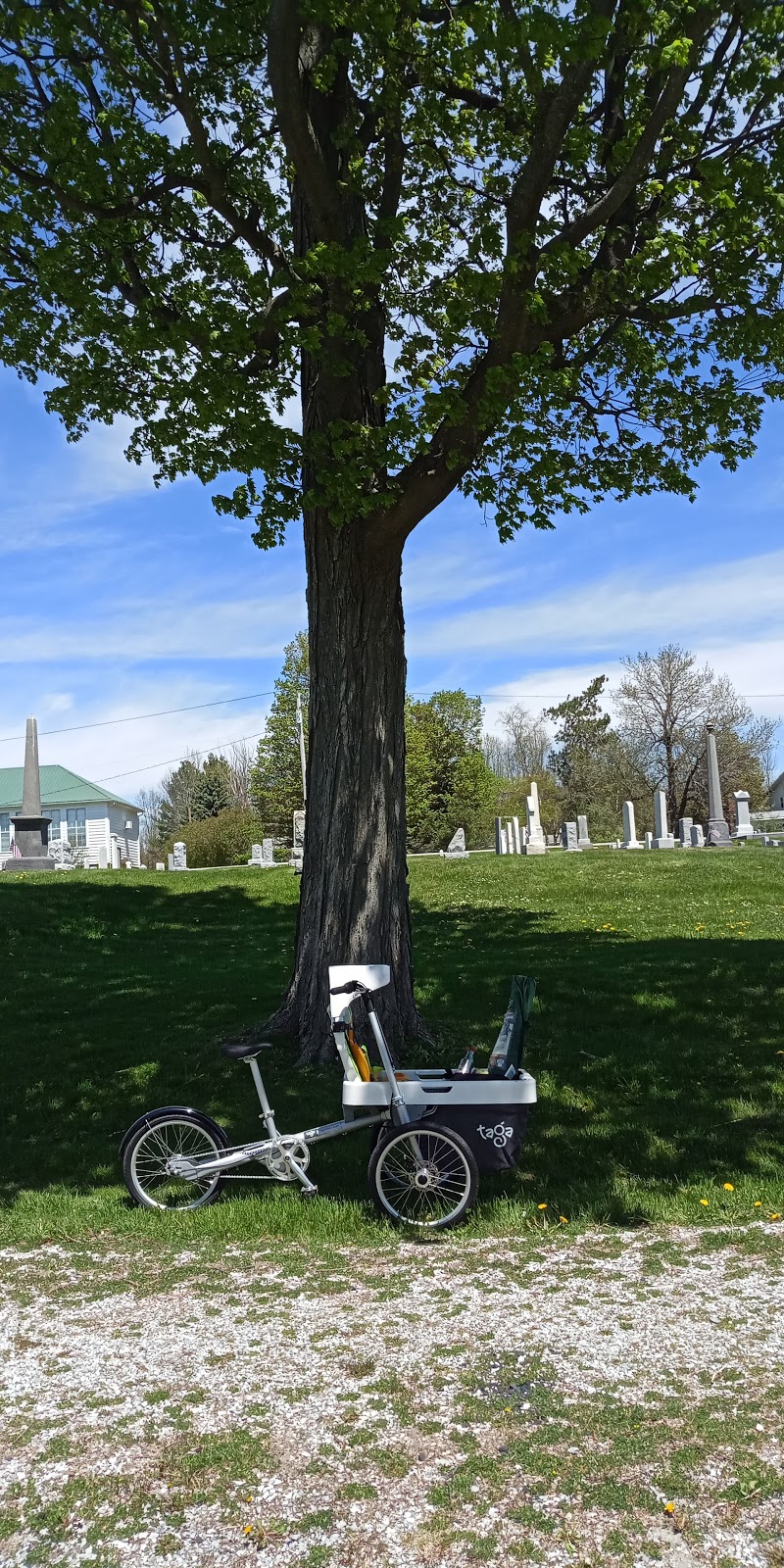 So. If you have a disability—asthma, a wonky knee, a bad back, poor peripheral vision, paralysis, motor control issues, or whatever your body or brain has handed you to live with, and you want to try something new, there are solutions out there. You may even not think of yourself as having a disability, but if you really want to bike and you’re choosing not to because it is very hard every time you try—you might just not be on the right bike.

If you are looking for some adaptive bikes to try out, I suggest you talk to Vermont Adaptive, and see how they can help you figure out what you need.

Some other folks might be well served with an e-bike of some kind. (I’m planning on adding an e-assist to my bike, to make the hills go a little more smoothly.) An e-bike can compensate for muscle and cardio and joint challenges.  If you’re interested in test riding an e-bike or cargo bike, check out our lending library.

A note for those of you without a disability—I would very much like to stop hearing able-bodied people denigrate adaptive-style bikes. Every time I hear the phrases, “e-bikes are cheating” and “e-bikes don’t belong” or “this XX bike shouldn’t be on this path,” it’s jarring to me—it makes me feel excluded from biking. Not everyone is skilled or physically able, or heck, are maybe just learning. There’s no place for gatekeeping with biking, or really, any active transportation. If we want these incredible transportation machines to thrive, then our best bet is to let as many people as possible participate. Local Motion has been excellent at welcoming all types of people-powered transportation and has worked hard to help people access adaptive gear to help them enjoy active transportation. Our vision of the best of all possible worlds is to get every butt on a bike, and we hope you can join us.

And now, I’m going to see if I can sneak in another bike ride today. 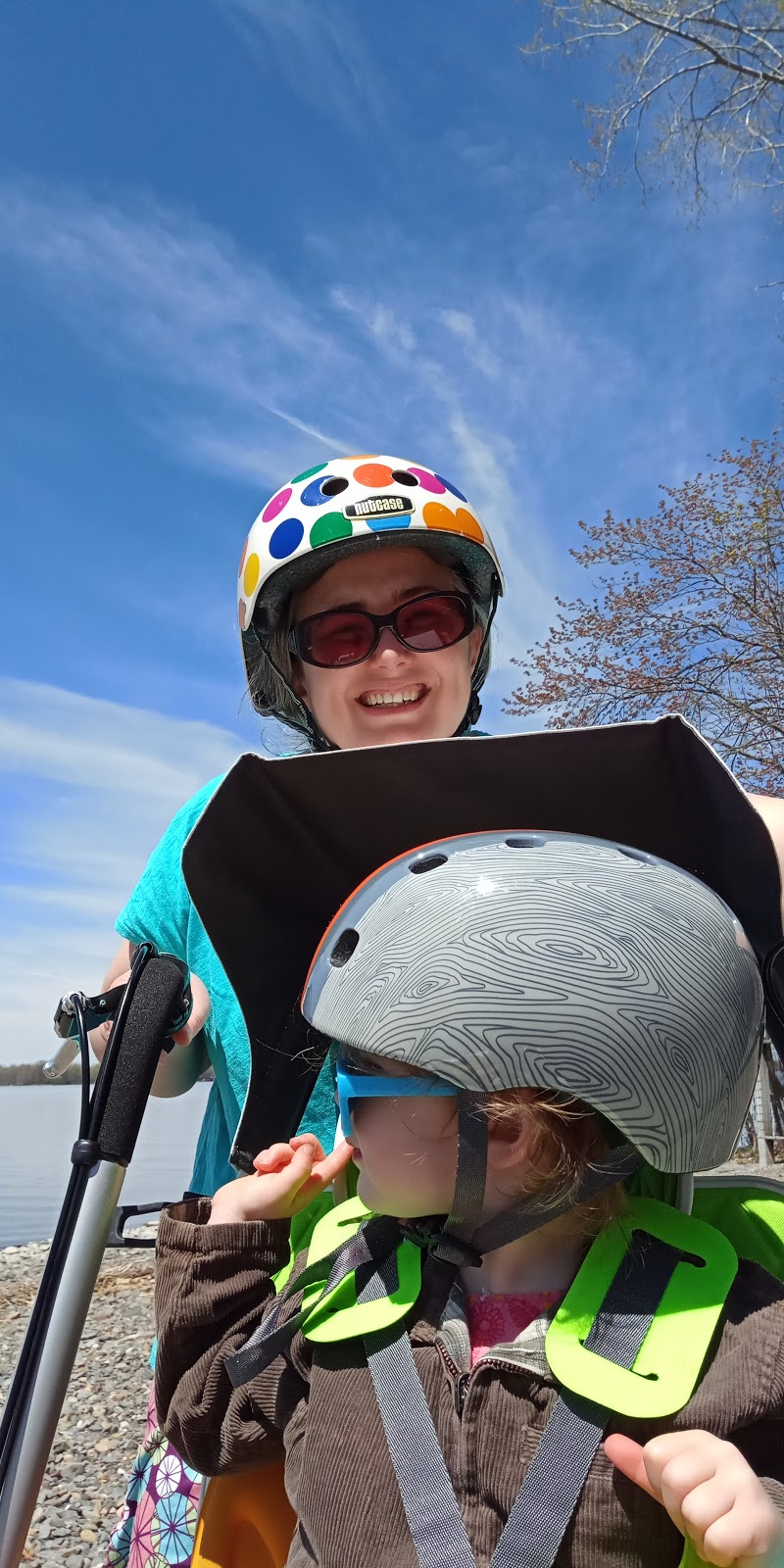