Riding as a Skill

I often see people riding in ways that are not efficient.  I don't make comments to other riders, but sometimes I want to. When I am lifeguarding at the YMCA I see a lot of awkward   swimming.  Even though I teach swimming for the Y, I don't offer comments there either.  Everyone is sensitive to what they perceive as criticism. I know that there are things I do inefficiently, but like most people I am reluctant to change.

When a rider is swaying back and forth in the saddle as they climb a hill, it usually means they are in a gear that is too high, so they are trying to compensate by shifting weight over their legs on the downstroke. This extra stress is not  good for knees. When seated the upper body should be relatively still.  I also see a lot of misaligned pedaling.  One knee is pointed more or less forward and the other out to one side.  This is inefficient and hard on the knees.  Both knees should be pointed forward.  Bike seats that are too high or low can also present pedaling problems.  At the bottom of the stroke, the leg should be slightly bent.

Body weight should be distributed between the legs hands and butt.  By engaging the back, you keep from putting a lot of weight on the arms, which helps avoid wrist and arm pain.  The shoulders should be relaxed, the arms slightly bent and the back flat.  I see a lot of people ride with stiff straight arms and hunched shoulders.  Over time this will cause pain.

My inspiration for alignment comes from The Alexander Technique which I studied many years ago in London.  The body feels best when, whatever you are doing, there is a sense of expansion, openness and alignment.  I use these ideas to guide the way I ride but from time to time, especially when I am tired, I forget. Shifting hand position, getting up out of the saddle and taking stretch breaks helps avoid pain on longer rides.

After all these years of riding I still have revelations from time to time.  I was in Richmond in August and as I rose out of my seat to pedal, I shifting my position just a little so instead of leaning forward as I usually do, I stood upright.  My alignment was better, I felt more relaxed and was able to pedal more efficiently because my weight was directly over the pedals.

I have only been bitten once while on a bike ride.  It was in the town of Canaan, way up in the Northeast Kingdom.  I was riding on a country road and passed a family in their yard. They were playing with their German Shepherd. The dog came running out into the road, barking.  Usually, if I get off my bike and stand with my bicycle between myself and the dog, the dog will bark a few times and then  go away.  This dog said to himself, "I can just run around that bicycle, and get this guy." Which is what he did.  He bit me on the upper part of my left leg.  The family called him back, and did not seem overly concerned that I had been bitten.  I was not going to let a dog bite ruin my ride, but when I got back to my hotel, I discovered that I was still bleeding. I bandaged my wound and let the police know about the incident.  Later that week I went to the doctor who told me to watch for signs of rabies.

There are fewer dogs off leash than there used to be.  Most of the time off-leash dogs bark at me but stay in their own territory. Some dog owners are not as helpful as they could be.  Last year I was riding on Old Pump Road in Jericho and a dog ran out onto the road from a lawn care business.  The owner of the dog called him back, but then I heard the owner complain about bike riders to his co-workers.  Later that week, when I told the story to a friend, he said "The dog owner probably thought it was your fault for tempting the dog with your meaty calves."

In August of this year I was riding on Browns River Road in Essex when I spotted a small black dog in a big yard, and the dog spotted me.  She started barking and raced toward me.  If I can easily out-distance a dog, I just keep on going, but in this case it was not possible.  Her owner said, "She is a friendly dog, she won't hurt you."  That is what many dog owners say when their dog is barking at you, showing their teeth and growling.  All three of us did a little dance for a while.  The owner tried to catch Katie, Katie ran back and forth, in and out of the road barking at me, and I kept shifting my bike to keep it between me and Katie.  To an outside observer, it would have looked kind of funny.  Finally the owner walked across the wide lawn to his house, got a ball and threw it for Katie.  She ran for the ball and I took the opportunity to take off down the road.  Katie dropped the ball and took off after me.  Luckily I had enough of a head start that I was able to outdistance her, but she did her best to run me down. 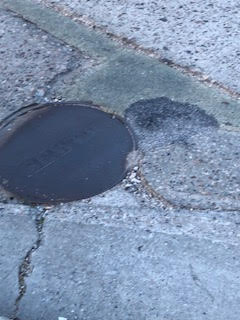 I have two bikes that are good with dirt roads and a road bike that is happiest on pavement.  Once in a while I end up on dirt with my road bike and I am always eager to get back to pavement.  Dirt roads vary greatly in quality.  There are some that are as smooth and hard as pavement and others that are always covered with gravel and washboard bumps.  (Many people who are familiar with the term 'washboard bumps' have never actually seen a washboard but  we  had one when I was a child).  Right here in Chittenden County there is a dirt road connecting Route 15 and Route 2A.  It goes beside the Winooski River for a while and also skirts the Air National Guard.  For some reason it is always in really bad shape.  I usually avoid riding it, but sometimes it is the most convenient route.  Main Street in Winooski deserves special mention as a badly paved road and I ride on it almost every day.  Every once in a while, when I am out in the countryside, I come across a newly paved road.  That is always a treat, riding on smooth fresh pavement is a pleasure, as long as there is not a lot of traffic