I store all my bikes in my house. In the last couple of months, I have read many Facebook posts about stolen bikes. Most of those bikes have been in sheds or locked to porches. Keeping bikes inside is more secure than storing them outside. In the winter snow on the tires can be an indoor storage challenge. 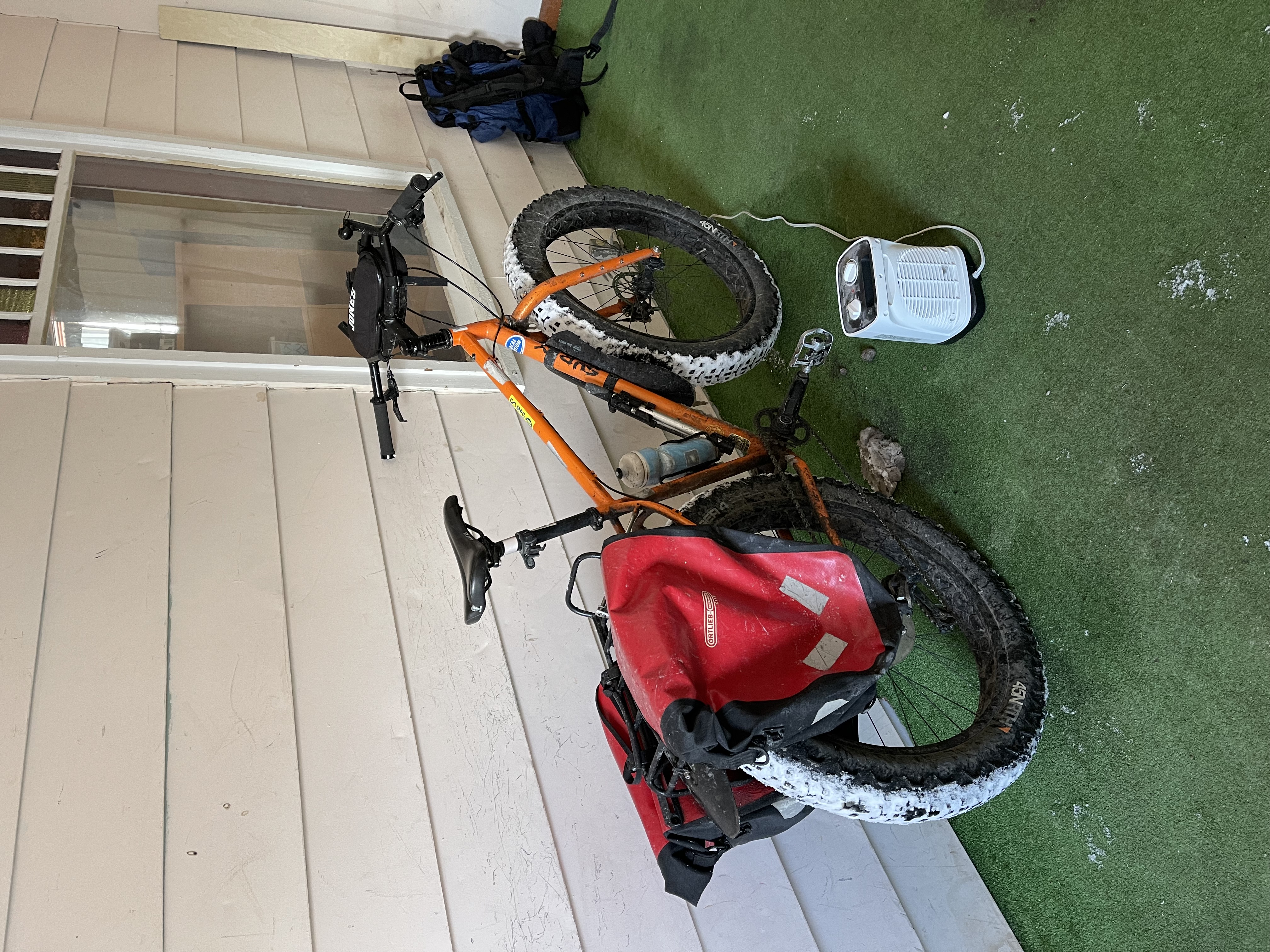 When I get home from a winter ride, I put the bike on my enclosed front porch and turn on an oscillating heat fan. While the snow melts I keep the outer porch door locked. When the tires are dry I  bring the bike into my house and the floor in my living room stays dry. Indoor storage also means that I can put on all my gear and turn on the bike lights before I leave the house. This makes a big difference on cold days.  Leaving the house when I am warm makes it much easier to stay warm as I ride.

On January 24th I had an appointment at The University of Vermont Medical Center. Twice in the last couple of months, my watch picked up an irregular heartbeat. I called my doctor’s office and they thought I should come in to check it out. I saw an intern from Texas. He asked me if I had fallen in the last couple of months. Now that I am 65  that is one of the questions they ask. I was taken aback, I think of falling as a part of everyday life. I don’t like to fall off my bike or slip in the snow, but given my choice of activities, it is going to happen. I want to fall without getting hurt. I do stretching and balancing exercises every day and that helps me bounce back up. I got an EKG and my heart is fine. The electrical system that controls my heart is like that of an adolescent boy, or at least that is how my doctor explained it. No wonder I keep falling hopelessly in love! We also talked about the cold weather and I told him he should get some merino wool long underwear. He had never heard of merino wool.

The next week on the way to the YMCA I pushed the walk signal so I could get from the Riverside Avenue recreation path to Colchester Avenue. There was someone already waiting to cross and another person just behind me. It was very cold and I was wearing a balaclava with a plastic mouth and nose cover. This made it hard for me to see things at my feet. When the signal changed I rushed to cross the street and my bike tipped when I went over the snow piled up on the side of the road.  The woman behind me asked if I was OK and I said that I was fine. I got up, got back on my bike, and rode up the hill. It was an example of a “good fall’.  I was not hurt and I got right back up. I was grateful that I was able to keep it going.

In the early afternoon on Friday, October 22nd I rode to the YMCA for a swim. After swimming, I got into my wool biking bib. My friend J said to me “You are really rocking that bib.” I said, “Thanks.” He said that good merino wool bike gear is hard to come by. I told him that I got the bib at the Outdoor Gear Exchange consignment area. I said "That’s why it is partly held together by duct tape." C, another friend said, “Apparently the only thing duct tape won’t work on is ducts.”  I thought he said ‘ducks’.  I said, “Yes, but why would you want to tape a duck?” He said, “To keep the air in I guess.” At first, I thought he was talking about an inflatable duck toy but then I realized how we had been at cross-purposes. I said, “Isn’t English such a great language? It enables us to be completely confused.” 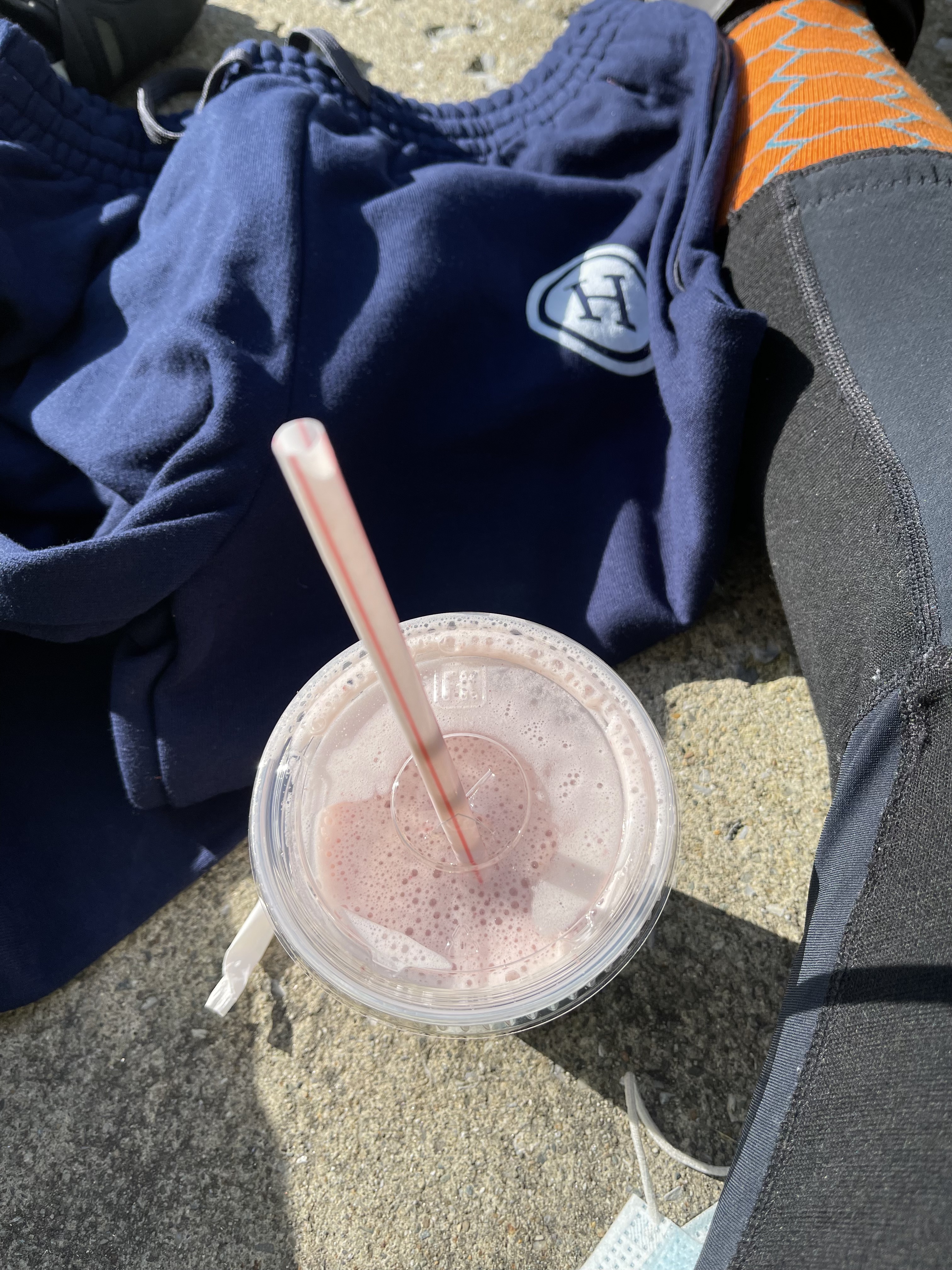 After my swim at the YMCA, I rode down to the Baird Gym on Pine Street for my flu shot. Howard Center, my employer, usually has a health fair in the fall but because of Covid-19, it was a much smaller affair last year. I got my flu shot, and a pair of sweat pants plus a smoothie. The strawberry/banana smoothie was a little disappointing because the fruit was not fully ripe so there was some underlying bitterness. 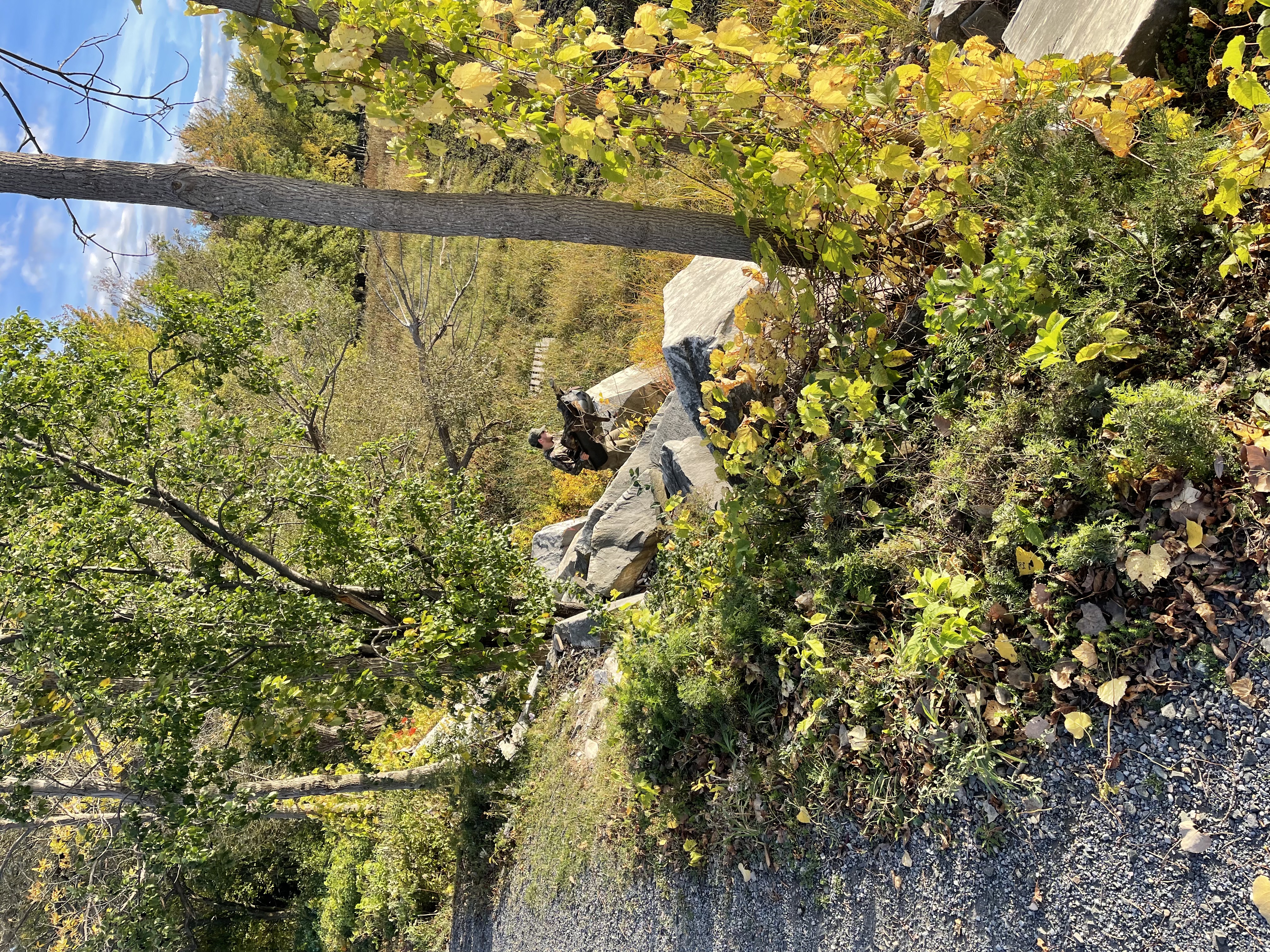 I rode to the waterfront bike path and then to the causeway. I got some nice shots of the lake and I also saw a guy dragging a sled with camouflage gear and some duck decoys. I could see that ducks were going to be a recurring motif in my day.