On Sunday, January 16th,  I had a sleepover at the group home. I knew that the next day was going to bring a snowstorm. I could have walked to work on Sunday and then walked home on Monday but I like the challenge of riding in the snow. I enjoy adventures that I don't have to travel far to experience. Riding to work on Saturday when it was eight below and windy, and my ten below ride Sunday morning were also adventures. I was a little anxious about how much I was going to have to walk my bike in the snow, but I was fairly sure I was going to make it home. I brought my fat bike to work, which has studded tires. 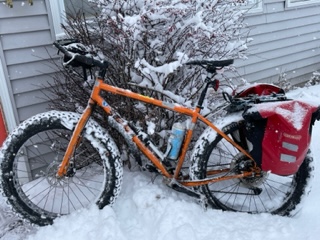 I also brought along a baseball cap and safety glasses. The cap and the glasses help keep snow out of my eyes. As I left the group home I saw someone in a pair of lime green rain pants made by Showers Pass, a bike gear company located in Portland. I have a pair of the same pants. I said, “Go Showers Pass” and he agreed. I took it as a good sign.  In many cultures, before setting out for a long journey travelers consult oracles to help them foresee what is about to happen. The man in the green pants was my oracle.  During a snowstorm, the snow in the road gets churned up and is difficult to ride in.  I took the sidewalk but got off my bike when I met pedestrians. I made it to the Riverside venue recreation path, which had been plowed earlier in the day.  My fat bike handled the snow very well. I met a cross country skier and we exchanged greetings. I had to walk my bike when I got to the bridge over the Winooski River. Snow had been plowed onto the sidewalk. I also walked in the pedestrian area on the roundabout, but I was able to ride the rest of the way home without much trouble. 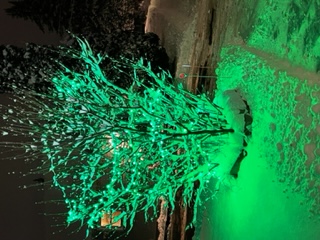 I make sure that each day I walk at least 10,000 steps. Sometimes, in the evening, when I have not yet achieved my goal, I go for a walk. If I have 3000 steps to go, I have a route that is approximately that long.  I have other routes for when I need fewer steps. During the winter I usually walk in the dark. When I ride I have lights on day and night, but I don't use lights when I walk around during the day. For most of the winter, for my night walks, I wore a high visibility vest, a headlight and I carried a walking stick with light. Recently I added a flashing red light to my ensemble. I hook it on a belt.  After a snowstorm, I prefer to walk on the road and my lights and vest ensure that I can be seen. I enjoy walking at night, and there is usually not much traffic, after Christmas the lights stay up for a while and they brighten my walk. I recite my poetry cycle and get a good rhythm going. I fall into a trance as the walk unfolds. Nothing particularly mystical, but often quite pleasant. Mostly I see people walking their dogs. 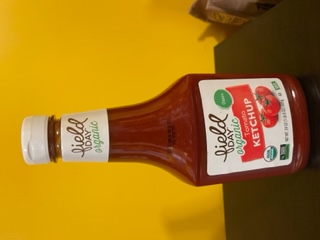 I always check the weather in the morning before heading out for the day. On October 20th the forecast called for a sunny warm afternoon. I immediately started plotting to get a ride in after work. I had to dress warmly for my ride into work that morning because it was in the ’40s. I brought along a pair of bike shorts for my after-work ride. During the day my son texted me that he needed ketchup. He likes Field Day organic ketchup. At work, I changed into my shorts and I was able to leave around four, but then I had to decide whether to get the ketchup first, and carry it with me on the ride, or get it when I was done with the ride. I decided to get the ketchup first so I could head straight home after riding. Generally, the best line to go to in City Market is the one leading to the service desk. Of course, because I was in a hurry to get out and ride, someone took an interminable amount of time figuring out their order. I was able to remain calm. I rode down to the bike path, out to Airport Park, and then to the end of the causeway. I rode back to Airport Park and was grateful that the bathrooms there were still open. They close before winter begins. I took the bike path to Shore Road, then picked up the 127 Bike Path and took it to the Riverside Avenue Path. That brought me to Winooski and then home.  By that time it was starting to get cold and dark. There is an elegiac quality to rides in October. I feel sad that warm weather riding is at an end.

As the days get shorter, it is becoming more of a challenge to ride after work. I don't like riding far from home in the dark, even with good lights. It also gets cold. Riding with rush hour traffic is no fun, but I was able to do ninety percent of this ride on bike paths, and I avoided rush hour traffic.

I feel a sense of satisfaction when, through a combination of planning, good weather, and luck, I can steal a ride late in the year.

This bike pump is outside the exit for the YMCA preschool. I have hardly ever seen a bike rider use the pump, but preschool children love playing with the tools and trying out the pump. Most parents are hesitant to let their children play with the pump and the tools, but I think it is a great opportunity for kids to become familiar with bike maintenance equipment.

The pump is a good example of unexpected consequences. It was put there for bike riders to use but proved to be more enjoyable and useful as a toy for children. Another good example of unexpected consequences is at the Fletcher Free Library. There is a low winding wall that leads from the sidewalk to the entrance of the library. All young children seem to enjoy walking on the wall. The wall gets higher on the side where there is grass but stays the same height on the pavement side. Children can jump onto the grass from a height that feels comfortable. I asked the architect who designed the wall whether he had children in mind and he said that for him the wall was just a design element. It was by chance that he made it so enjoyable for children.