Dressing for the Weather

Dress for the weather as it is rather than the weather you hope for. Sunny spring mornings can be especially deceptive. If it is in the 40’s with a brisk breeze blowing you are in for a chilly ride if you underdressed. Sun can quickly turn into rain or snow. Always bring along a waterproof jacket, just in case.

On August 21st of last year, on my road bike, I left my house at around 6 AM and headed north on Route 7. As I rode past Winooski High School I noticed the rising sun was a red disk in the sky. Near Chimney Corners I stopped to take some photos of mist over wetlands and the rising sun. 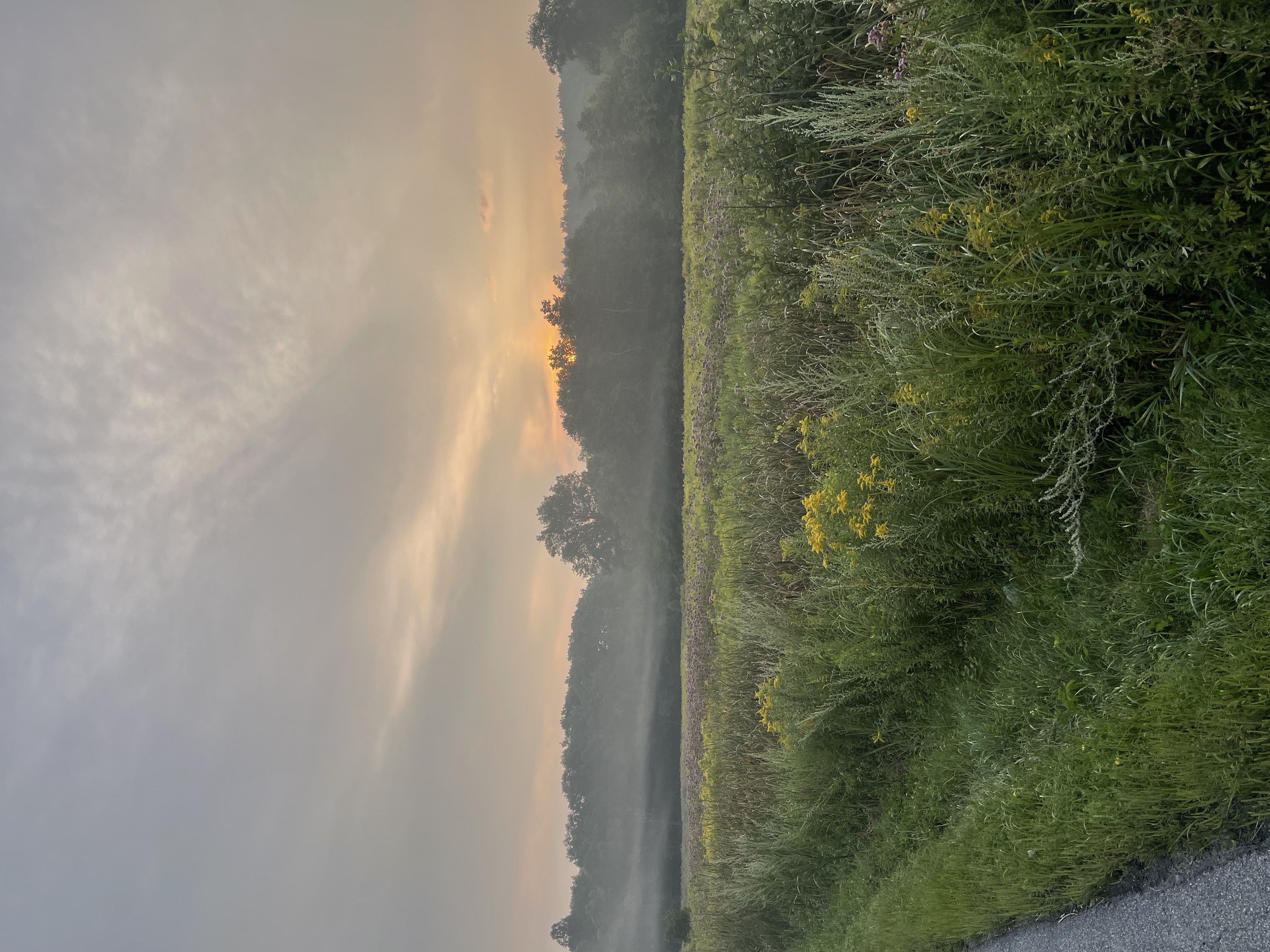 On a long ride, I stop once an hour for a snack and some water. My first stop was the bridge over the Lamoille River on West Milton Road. I ate some sesame cookies my sister sent me for my birthday. When I set off on a bike ride I am often not sure where I am going to go. When possible I head into the wind on my ride out and with the wind on my ride back. I have a mental map of most of the area within 25 miles of my home. If I am going farther afield I bring along a map. As the ride unfolds I decide my route based on how tired I am, the weather conditions, the probable traffic and the time of day. By the time I reached the bridge over the Lamoille River I had decided to ride up to Saint Albans. I took Lake Road to Georgia Shore Road. There was very little traffic and it was a pleasure to be out early in the morning. The forecast was for a hot day but that early in the morning it was still cool. I stopped at Georgia Municipal Recreation Area and had my second snack - trail mix and  some blueberries. While I ate my snack I read a few pages of a biography of Henry David Thoreau by my friend Kevin Dann.  I filled my water bottle and headed out again. Sometimes I like to stop at The Traveled Cup coffee shop in Saint Albans, but I had water and food so I kept on going. When I ride back from Saint Albans I usually take 104 but this time I took Route 7 because it had been newly paved. On a road bike it is a pleasure to ride on new pavement. By this time it was getting hot, so I made sure that I was drinking enough water. I stopped at a gas station in Georgia to use the bathroom and get some more water. I found shade beside some gas pumps out behind the station. I ate trail mix and some dried apricots and tried to cool off. I also did a bit of stretching. On a long ride my legs are usually fine, but my back gets sore.

I did not know how far Route 7 had been newly paved, but I decided to continue south to Milton. Many years ago I had a close call with a white van on the road between Georgia and Milton, and I have avoided that stretch of road ever since. The new paving stopped before I got to Milton, but by that time I was committed to the route, so on I went.  I made it safely to Milton and then headed for the Milton-Westford Road. I knew I was about to climb a big hill, so I took a break and had some more water.

When I got to Westford I headed for the Gazebo at the center of the village green. By that time the sun was high in the sky and the temperature was 88 degrees. It was also humid. I do better in hot weather than cold, so I was feeling OK, but I knew I had to be careful. There were three people in the gazebo and two small dogs. One woman was giving another woman information about the dogs. After they were gone I noticed that the man had left his phone on the chair he had been sitting in. He was by his car and I called out to him and he came back for the phone. I did some more stretching and then had trail mix and some blueberries. My hands got sticky from the blueberries  so I walked my bike over to the library and washed my hands and got some more water. 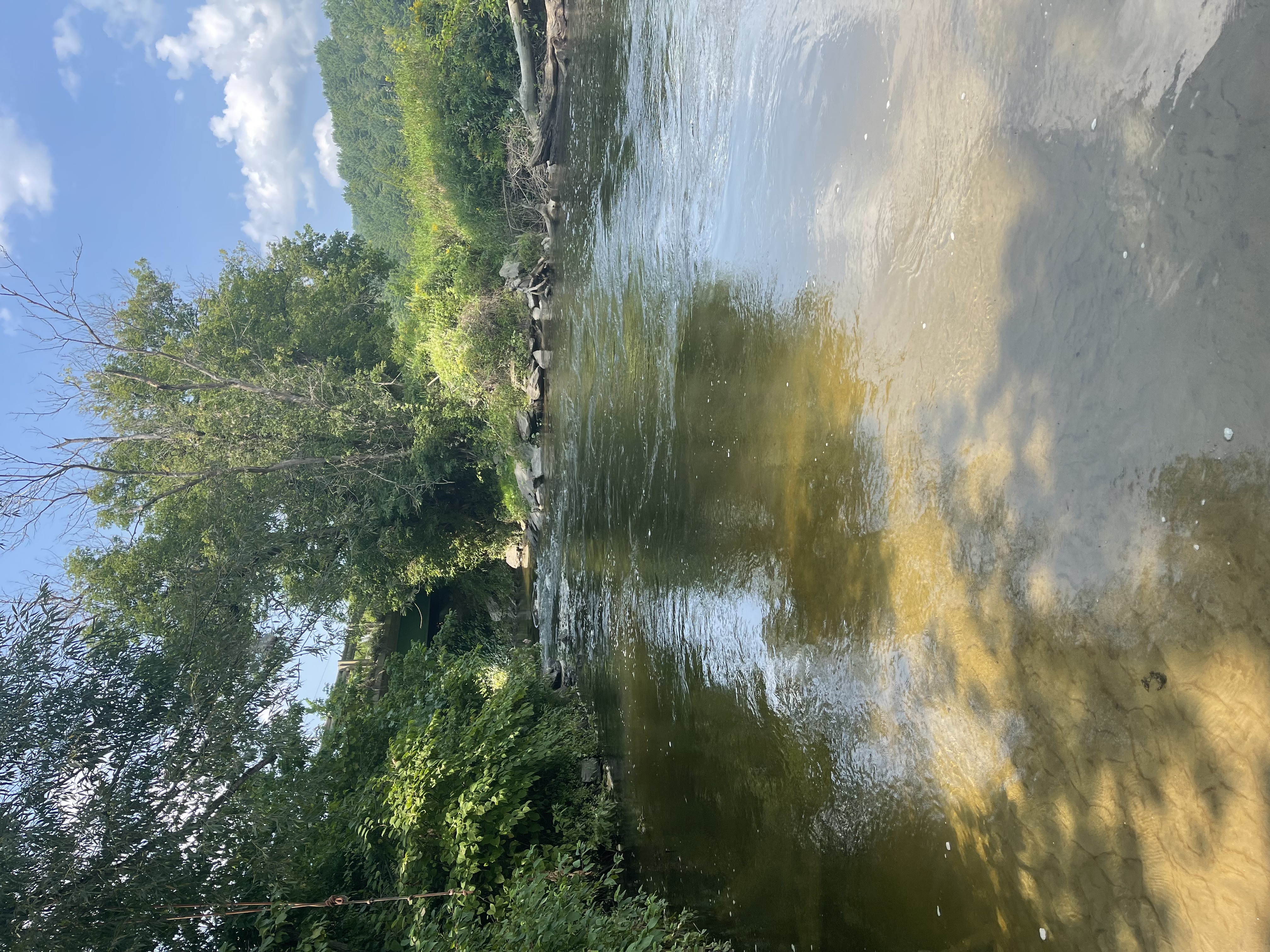 It was a hot ride on Route 128 and I was glad to stop at Pettingill Road for a dip in the Browns River.  I didn’t have a bathing suit, towel or goggles, but it was so hot I didn’t mind getting my bike shorts wet.  The water was nice and cool, and I felt refreshed as I continued my ride.

I proceeded to Essex, then rode into the grounds of Essex High School.

I stopped in the shade for my final break of the ride. I felt tired but satisfied.

I went home by way of Pinecrest Drive, Susie Wilson Road, and my usual shortcut behind Saint Michaels College.

In late August of last year I worked on memorizing this poem during my walks:

The Lake Isle of Innisfree

I will arise and go now, and go to Innisfree,

And a small cabin build there, of clay and wattles made;

Nine bean-rows will I have there, a hive for the honey-bee,

And live alone in the bee-loud glade.

And I shall have some peace there, for peace comes dropping slow,

Dropping from the veils of the morning to where the cricket sings;

There midnight’s all a glimmer, and noon a purple glow,

And evening full of the linnet’s wings.

I will arise and go now, for always night and day

I hear lake water lapping with low sounds by the shore;

While I stand on the roadway, or on the pavements grey,

I hear it in the deep heart’s core. 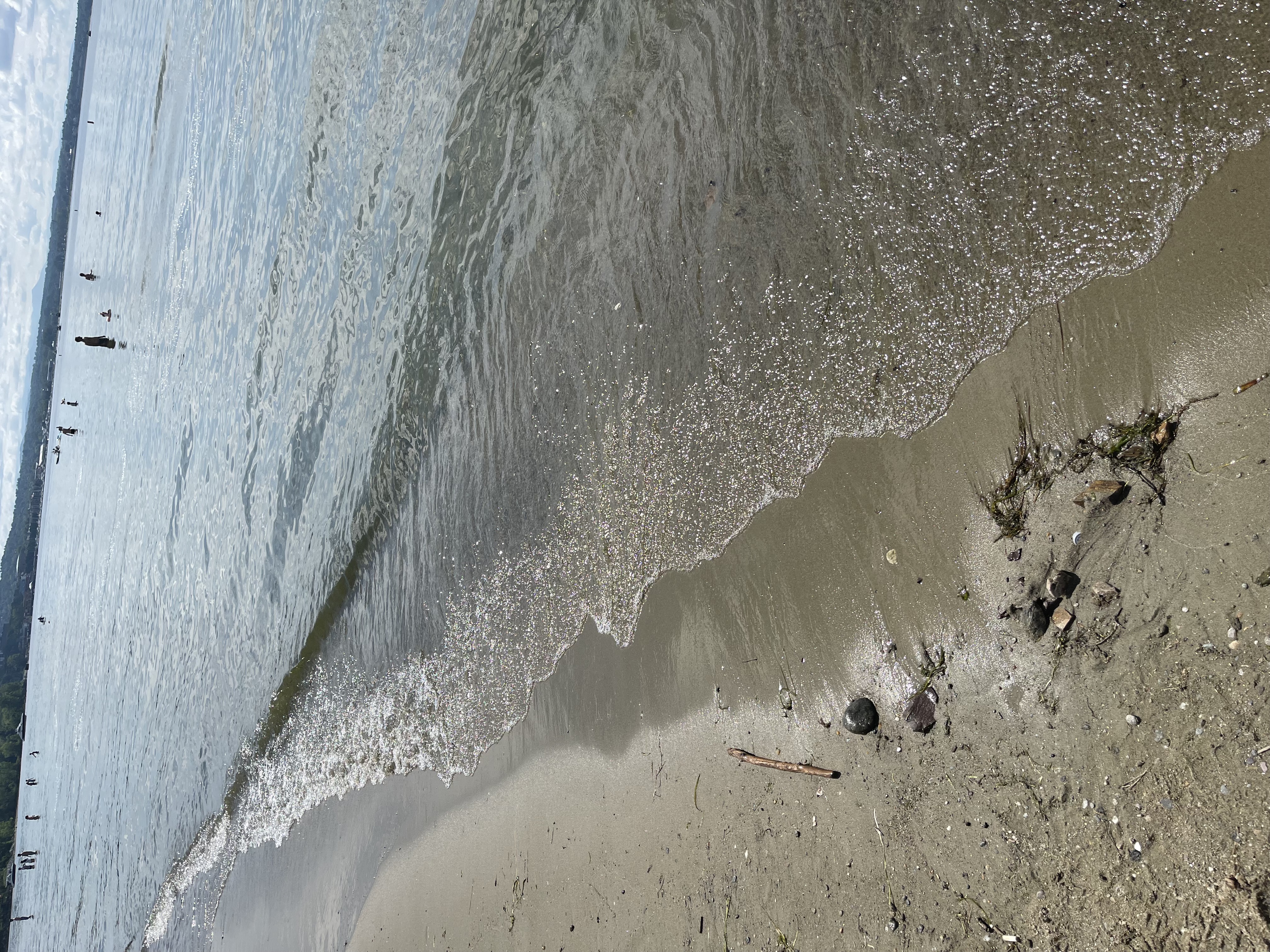 For some reason I had been having a hard time remembering a line near the end of the poem: “I hear lake water lapping with low sounds by the shore;”

Finally, on a Saturday night I got that line in my head. The next morning I went swimming at North Beach and then took a walk along the beach. I was reciting ‘The Lake Isle of Innisfree ‘ to myself when I realized that I was hearing lake water lapping with low sounds by the shore.  Seldom do I experience such a direct connection between what I am doing and what is happening in a poem.