If you want to ride first thing in the morning, but have trouble motivating yourself, set out all your bike gear and clothing the night before. Some people wear their bike gear to bed! When you invest in the ride ahead of time it might be the nudge you need to get on your bike instead of taking the car. Driving is too easy. Unless there has been a snowstorm you can generally just jump into your car and go. A more radical solution is to get rid of your car. Motivation is less difficult when you have no choice. I have no car so if I want to get to work I have to either walk, take the bus or ride my bike. Riding my bike is the easiest choice most of the time.

Another option is to buy a very expensive bicycle. Then you would feel guilty not riding it after making such a big financial investment. 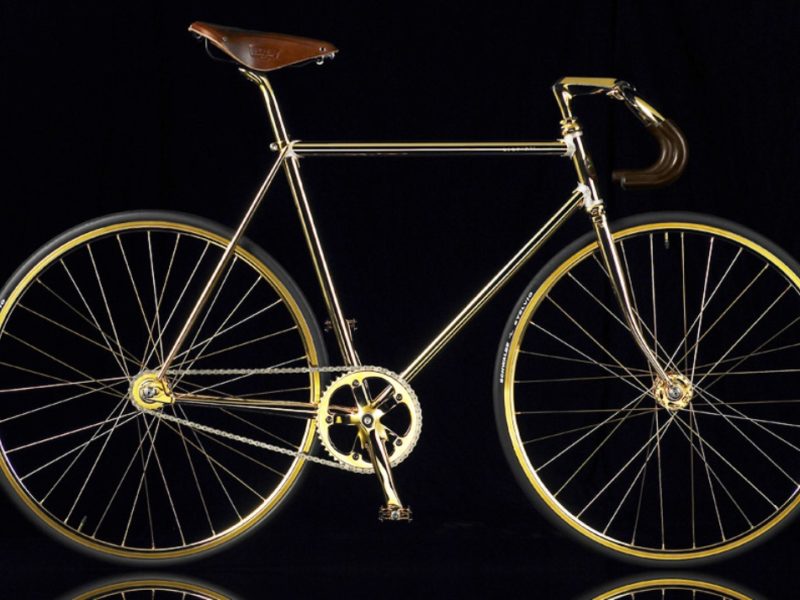 If you have some extra cash hanging around you could purchase the Aurumania Crystal Edition Gold Bike for only $114,000. It has a frame plated with 24-carat gold.

Doing things ahead of time is called being kind to your future self. I try to be kind to my future self by having back-ups in place in case I lose or forget things. I have a second pair of reading glasses at work, and rain gear in case I have to ride home in the rain. I also have an extra set of keys at work. Sometimes back-ups don’t work. I put an extra bathing suit in a storage room at the YMCA. In May, I forgot my suit but when I went to look for it the suit was gone! I had to scramble to get a suit to teach my class. Fortunately, there was an extra one available and since it fit me well, the Aquatic Director gave it to me!

I have to focus on transitions from one place to another because that is when I forget things and leave them behind. More than once I have forgotten my razor and shaving cream at the YMCA. The last time I lost my keys was after unlocking my bike at City Market and dropping the keys on the ground instead of putting them in my pocket. When I am rushed or anxious I am more likely to leave things behind.

Sometimes even when I focus I forget things. In April, I left the house without my glasses, or swim goggles. Luckily I was able to borrow a pair of goggles at the YMCA and use my backup pair of glasses at work. I also left my gloves on my bike rack when I went into the YMCA. Luckily they were not stolen. 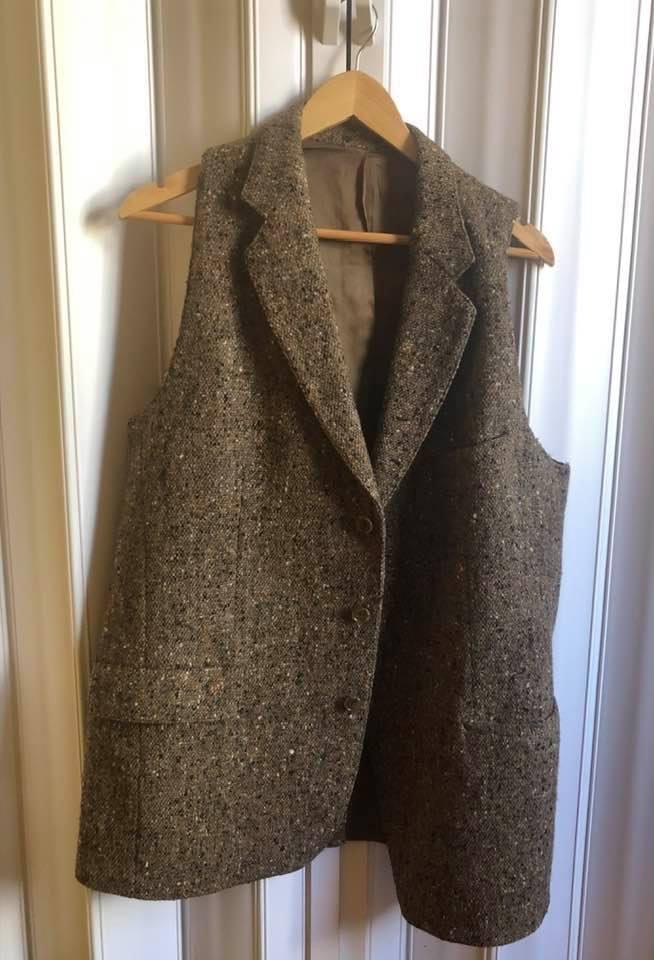 This vest is Donegal Tweed, from Ireland. The pattern is called salt and pepper because of the black and white flecks. It was originally a coat, but I had it converted into a vest because I found the sleeves and shoulders constricting for bike riding. The vest is both warm and wind-resistant, making it a good addition to a winter riding wardrobe. Harris Tweed is much more common in this country than Donegal Tweed. I have a gray herringbone Harris Tweed blazer. I bought my first Harris Tweed coat in a second-hand shop in London in 1979. It was green. I wore it when I took a bus from Paris to Lyon, in 1979. The bus arrived at one in the morning, and I thought I could stay at the bus station, but that was not possible. Instead, I had to sleep outside by the Rhône River. It was September and not too cold but I was grateful for my Harris Tweed blazer.

Waulking is a process of softening the wool after it is woven.  It is done by women, who sing traditional Celtic songs while they kneed and pound the woven wool. There are videos on YouTube if you are interested. This month’s blog can now be labeled ‘Elements of bike riding, walking, and waulking.’

In the last five years, merino wool has become a popular fabric for biking clothing. It is warm and breathable and comfortable next to the skin. Many years ago wool was used in bike tights and bike jerseys but it fell out of favor during the era of Lycra and polyester. Now it is back. Merino wool is much more comfortable than old wool gear.

This little-used bike path goes from Manhattan Drive in the Old North End to Ethan Allen Parkway in the New North End. For bicycles, it is the only paved route to Ethan Allen Homestead. The bike path is not plowed in the winter, so even with a fat bike, it can be a challenge to ride. I have long believed that bicycles should be allowed on Route 127. This would make it possible for bikes to get to Ethan Allen Homestead all year round. Because it begins and ends on little-used streets, the Route 127 bike path is usually not crowded. Last spring when almost everything was shut down because of Covid-19, many more people were on the path, but gradually over the summer fewer people walked or rode on it. For me, it remains a useful way to get to the Homestead or the Family Room Garden and to get from Winooski to the Burlington Bike Path. Some parts of the path are pretty rough, new paving would really help.

In postwar Italy, a man gets a job that requires a bicycle.  He is hired to put up posters. He rides around in his ordinary clothing, sometimes carrying a ladder! No helmet of course. On his first day of work, his bike is stolen and the bulk of the movie is about his quest to get it back. He searches for the bicycle with his young son. Sadly he never gets the bike back. I have been lucky, I have never had a bike stolen. I always lock up my bike, even if I am only leaving it for a few minutes. My commuter bike is beaten up, so it is less tempting to steal than a newer bike would be. Most bike thefts are opportunistic. Someone sees an unlocked, unattended bike and takes off on it. Bikes left locked to porches overnight are vulnerable. I keep my bikes inside my house. Vehicles are uniquely tempting to steal because they provide the means of escape as well as the object of the theft.

One morning in March, emerging from the YMCA, I discovered that someone had stolen both my front bike light and the mount that went with it. It was annoying and disappointing. The bike rack is right outside the YMCA. I thought the bike and all my equipment would be safe. They were not. Later in the day, I got a new light at Old Spokes Home, and now every time I lock up my bike I take off all my lights and put them in my pannier. This is the second time that a light has been stolen from my bike. The other time was about a year ago in front of City Market.

In the fall of 1978, I traveled to England. For a month I lived in the village of Aylsham, in East Anglia. Every day I took long walks through the English countryside. I got to know most of the roads and footpaths within a day’s walk. There is an extensive system of footpaths in England that are supported and protected by local walking organizations. Almost every part of the county is accessible by footpath. In Vermont, by contrast, there are relatively few footpaths and trails.

A year later I moved to Chaponost, a village just south of Lyon in France. I was there for three months, and I spent every day walking through the countryside. In the course of my walks, I met an Au Pair from Ireland and we walked together once in a while, but mostly I walked alone. Each day I headed out on a different route, I walked for five or six hours. It was deeply satisfying to really get to know one place intimately.

I enjoy fiction set in English villages. My favorite village writer is Dora Saint, whose pen name is Miss Read.  She wrote about village life in the Cotswolds, which is in the southern part of England.  The climate there is mild and she describes flowers beginning to appear in February. As I write this on the morning of March 13, there is a light covering of snow on the ground. I find Miss Read very comforting.

Villages are ideal for walking. Generally, there is not a lot of traffic and getting out into the countryside is easy.  I am happy enough walking in Winooski, and I can do some fine walks right from my door.  I do not need to walk in a beautiful place, and much of my walking in Winooski feels ordinary. In Vermont, there are few places where I could so easily live without a car.  I depend on the bus system and Car Share. Living in a Vermont village would mean that I would have to have a car.

I have lived in a number of different places, and each one of them has presented walking rewards and challenges. One of the worst places to walk was a suburban community on Long Island called Brentwood. It was built exclusively for cars and there were few sidewalks and no bus system. I was there for a couple of months, and I walked a lot but it was not enjoyable. It has one of the highest murder rates per capita in all of the United States. Would sidewalks and footpaths help? Maybe.

Walk Score is a site that rates how good a place is for walking. My home in Winooski gets a 78 out of 100.  Brentwood gets a score of 30.