A banana holder keeps your banana from getting squished in your backpack or pannier on a long ride. You can get one online or at Outdoor Gear Exchange. Even if the hinge snaps off, as mine did, a rubber band will keep the two halves of the banana holder in place. 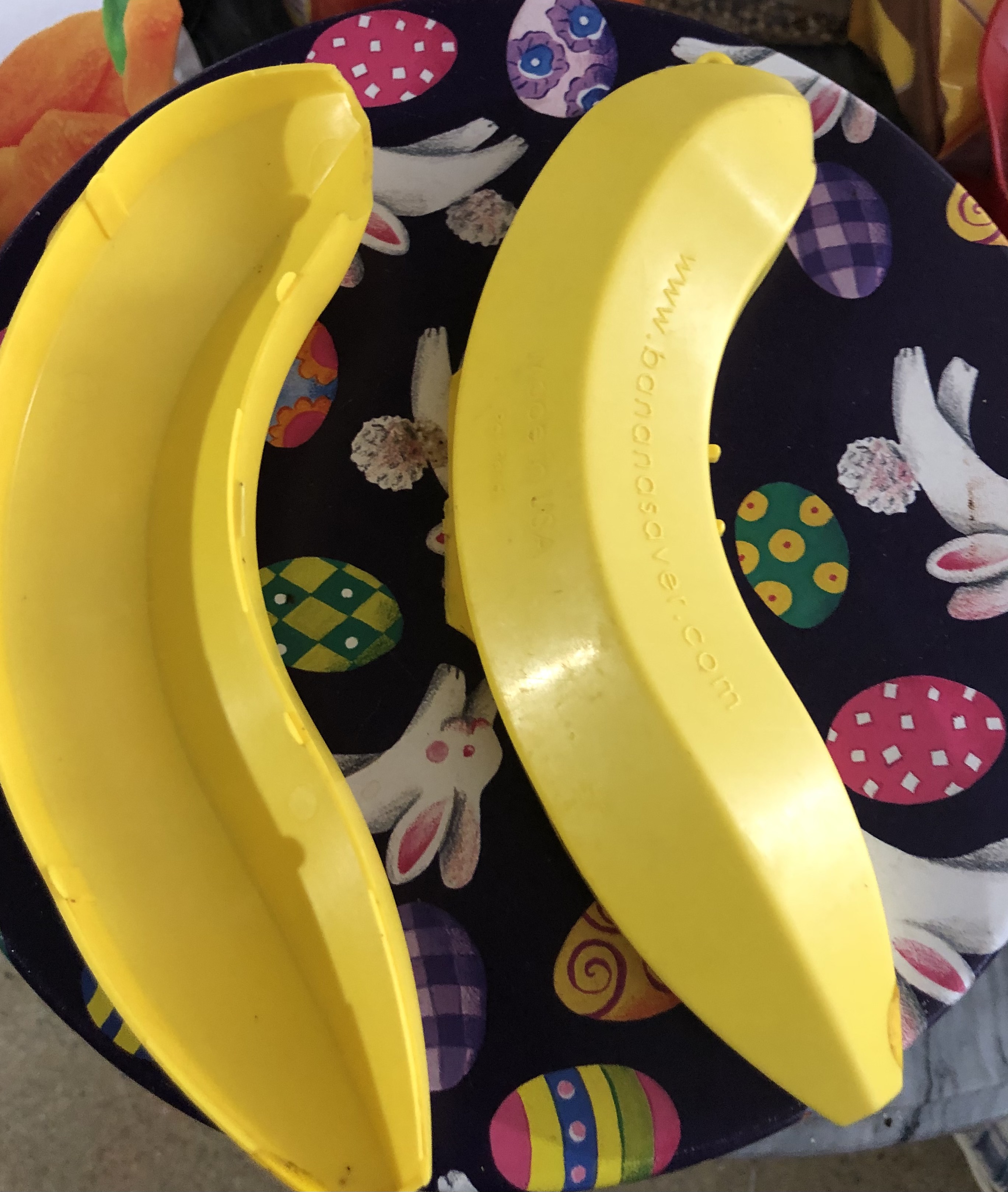 If you don’t want to get a banana holder but enjoy bananas, you can squish a banana with peanut butter and put it in a small plastic container. It makes a good fast-energy snack. I prefer peanut butter with no sugar added, and I miss the peanut grinder at City Market. It was removed soon after the pandemic began. I enjoyed making my own peanut butter. I liked watching the machine extrude the freshly made peanut butter. I keep a  supply of snacks on hand for longer bike rides. I have dried fruit, pretzels, apples, and trail mix, and of course bananas. I like my bananas ripe and you can often get reduced price bananas at City Market. They have some brown spots but they are perfectly edible. I try to stop every hour for a snack.  Admittedly a banana holder is not a necessity, but I like specialized equipment that improves my bike riding experience. I don’t own a car and the money I save is significant but it would be easy to spend it all on high-end bike equipment. I do not include a banana holder in the category of high-end bike equipment.

In February my book group read three connected novels by Samuel Beckett —  “Molloy”, “Malone Dies” and “The Unnamable”. All three books are set in a place that strongly resembles Ireland. At the beginning of  “Molloy”, the eponymous Molloy is a bike rider in spite of one stiff leg. He rests his stiff leg on the handlebars and pedals with the other leg. After some time he abandons his bicycle and shifts to walking with crutches. By the end of his travels, he is crawling through a forest on his belly. The whole process is a kind of reverse evolution.  Moran, a character in “Malone Dies” goes through a similar process.

In his youth, Samuel Beckett was an enthusiastic bike rider and in fact, his love for France, where he lived most of his adult life, was solidified when he took a bike tour through the Loire Valley.

‘The Third Policemen’ by Flann O’Brien is another book set in Ireland that includes bicycles. O’Brien writes about how people who ride a lot slowly become more like bicycles and the bikes they ride become more human.

James Joyce in “Ulysses” mentions a mile-long bicycle race but he does not describe it in detail.

I have a dream of one day taking a bike tour through Ireland.

Most mornings I ride from my house in Winooski to the YMCA in Burlington. I take Colchester Avenue which turns into Pearl Street.  I used to take a left on South Williams, then a right on College.  The YMCA is on College Street. Unfortunately so is the exit to the YMCA parking lot, so sometimes cars were trying to leave while I was trying to get in. In January I shifted my route. Now I ride down Pearl and take a left on Hungerford Terrace.  I then take a right onto Bradley Street and enter the YMCA parking lot with the traffic. 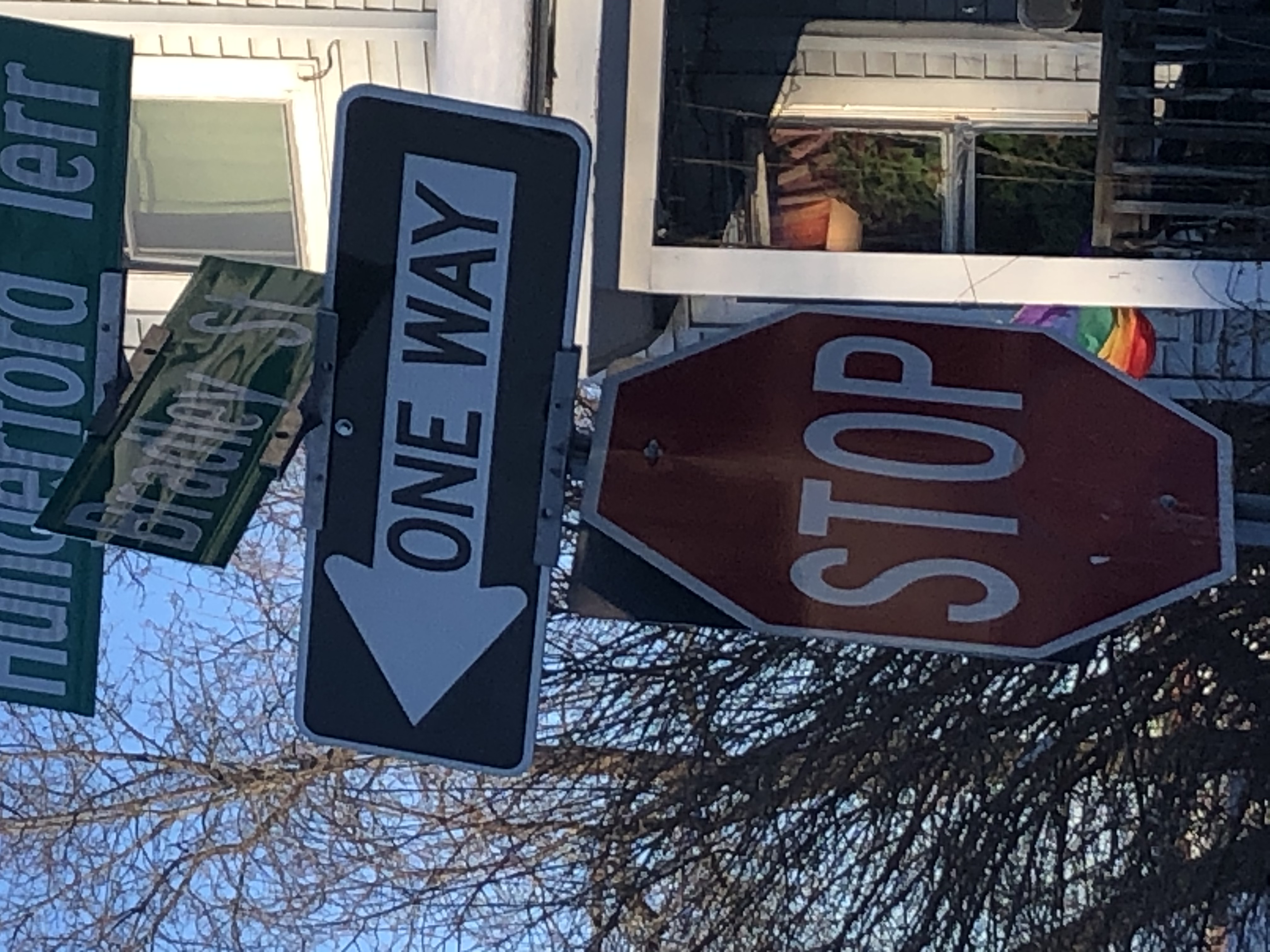 As I approach Bradley Street on Hungerford Terrace I  see a ONE WAY sign that seems to be indicating I am going down a one-way street in the wrong direction. As I get closer the sign reverses itself so I am then going in the right direction. A curious optical illusion.

I have also made a route change going home. I used to turn right out of the YMCA parking lot, then I took another right onto South Union Street and rode over to Pearl where I took yet another right. Pearl changed to Colchester Avenue which took me into Winooski. Now I take a left out of the YMCA parking lot and climb the hill until the end of College Street. The paving on College is in really rough shape, I hope they fix it this summer. I take a left onto South Prospect Street and then take a path across one of the green areas at UVM. I ride through campus to the main entrance of the Hospital and then get onto Colchester Avenue and head for Winooski.

In April I noticed that on nice days there are many hammocks strung on the trees in the UVM green. I thought it was a new thing for UVM students but apparently, they have been doing it for a couple of years. I am so behind the times! 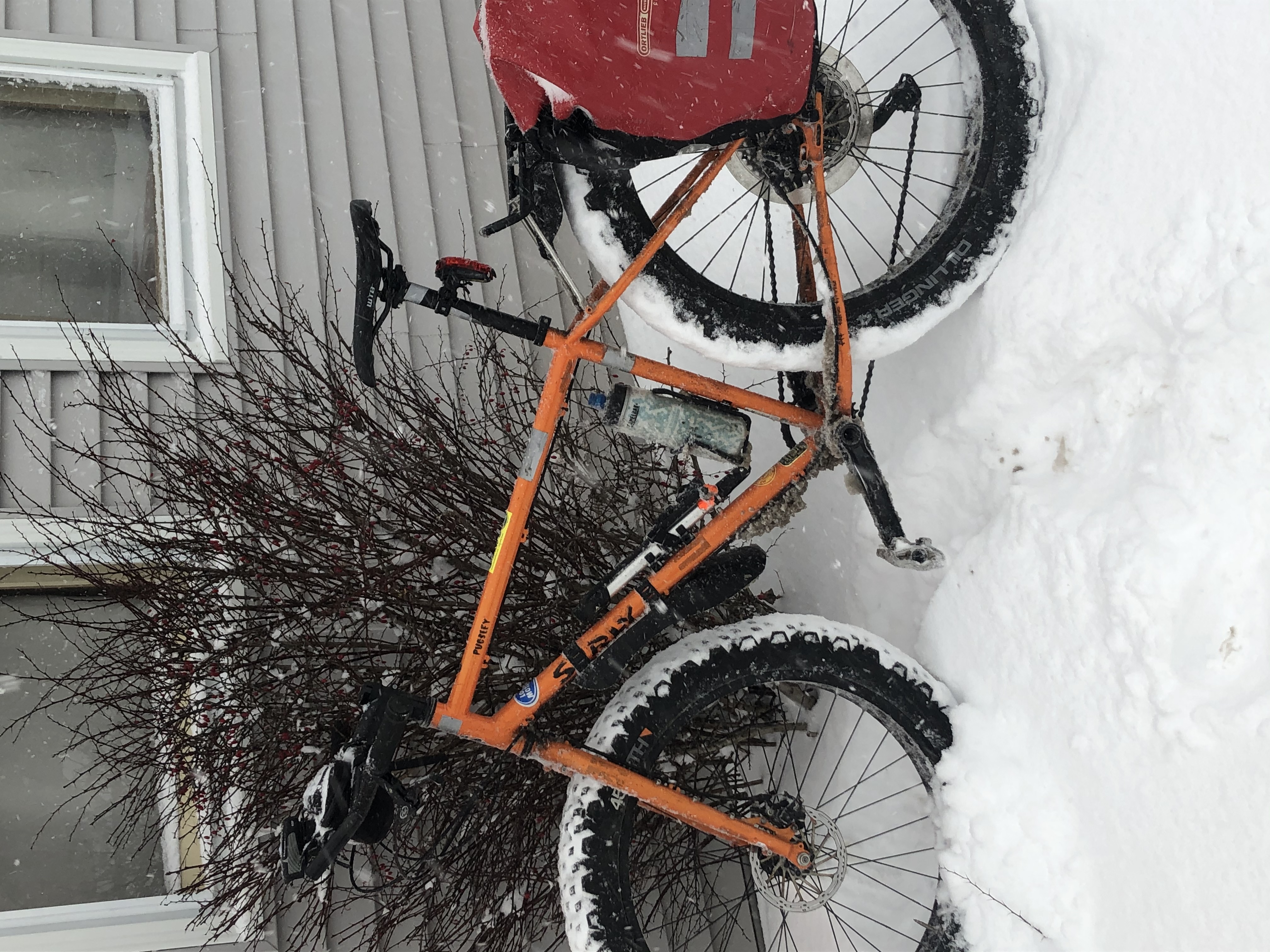 On the 2nd of February, I woke to a snowy day.  Just like that other Peter in, “The Snowy Day” by Ezra Jack Keats. (You may have noticed that I throw literary references into my essays every once in a while. I think the references add a little sophistication to an otherwise mundane subject). I was ready to walk to the YMCA if necessary but there was not yet much snow on the ground.  It turned out to be light but steady snow all day long.  The snowplows were able to keep up with clearing the street. The ride into town was not bad, but I did slip a little riding home in the afternoon. Loose snow churned up by cars is a challenge even on a fat bike with studded tires. It continued snowing through the night, but again it was steady light snow, and the roads were clear enough to ride. I was able to continue my daily commute without interruption.

I did not miss a day of riding this past winter. We had no blizzards that made it impossible to ride. The coldest temperature I rode in was minus six degrees. I am happy enough to refer to the winter in the past tense. Winter riding is challenging and interesting but I prefer warmer weather. 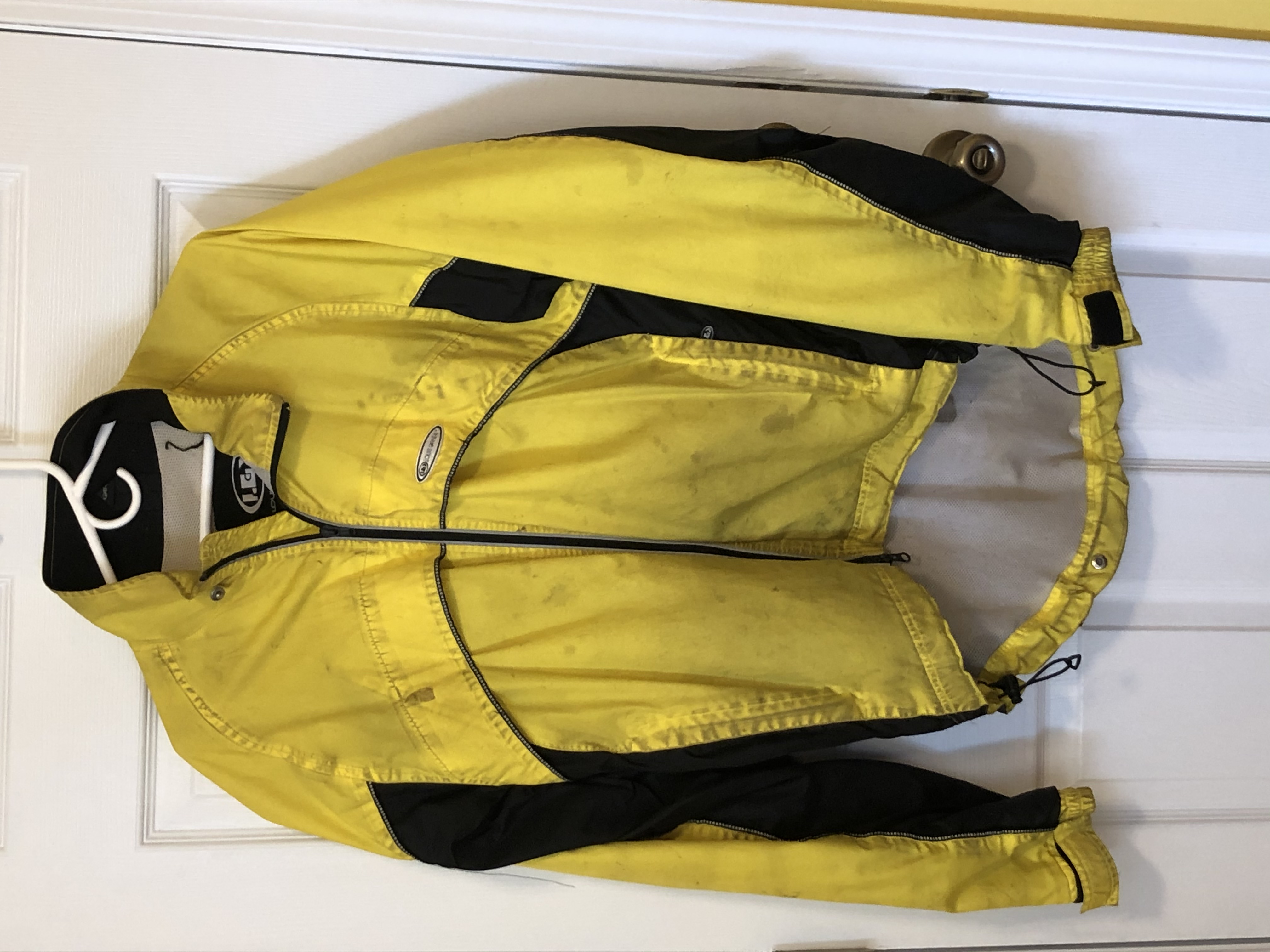 Twenty-five years ago I got my very first biking jacket. I found it at the Louis Garneau Outlet Store in Derby Vermont up in the Northeast Kingdom. It took me a long time to decide to buy the jacket. Even at outlet prices, it was more money than I usually spent on clothing. I believe it is the oldest piece of clothing that I own, and after all these years it is still going strong. I have had to make a few minor repairs, but the jacket is still serviceable. The yellow and black match my commuter bike. I have other jackets that have more technical features, but I still wear my Louis Garneau. I put a photo of this jacket on my Facebook page and someone commented on how dirty the jacket looked. I prefer to think of it as a kind of patina, a sign that the jacket has aged well. I have tried washing it with special gear detergent but I think the grime has now become part of the coat.

In the days when I owned my own car and had a bike rack on it, I occasionally took my bike along so I could go on a ride. I have taken some fine rides in the Northeast Kingdom, starting from Irasburg, Burke, Hardwick, and Canaan. Now I don’t believe in putting a bike on a car to ride, but I will use a bus from time to time to get out of town during rush hour for an evening ride.