Whenever possible ride on the road.  Sidewalks are primarily for pedestrians and when you are on the sidewalk it is easy for car drivers to ignore you. This means that when you are crossing a street it is more likely that a car will turn into you.

In early December of last year, I started thinking about buying a pair of heated mittens. My hands get cold very easily.  I looked at a pair of heated mittens by Outdoor Research. Mittens are warmer than gloves but they make it impossible to operate my bike lights and unlock and lock my bike. I needed to be able to wear thin gloves inside the mittens. I had a nice pair of wool glove liners but when I tried them on inside the Outdoor Research mittens the liners were too thick. A friend suggested a thinner pair at REI. I rode out to Williston and when I was locking my bike outside of REI I saw a rainbow. I took it as a positive sign. I found the glove liners, and later in the week, I bought the mittens. The liners worked well inside the mittens.

On December 16th, I tried out my mittens for the first time. The temperature was around six degrees. I got bundled up and preheated the glove liners with a hairdryer. I rode from Winooski to Burlington and my hands felt fine.

Later in the day, I went swimming at the YMCA.  My bike was locked outside the entrance. With my glove liners on I took off the lock and put it in my pannier, turned on my lights, and put on my helmet.  There is a fireplace in the lobby of the YMCA, so I dashed inside, warmed my glove liners on the screen of the fireplace, turned on my heated mittens and put them on and went outside, and got on my bike, and headed off for home. My hands were a bit cool when I got home, but not cold. It was great!

A couple of weeks later, after wearing the mittens almost every day they stretched out a bit and are now able to accommodate a thicker and warmer pair of glove liners.

I also like that the mittens have a cord attached to an elastic loop so I can still be attached to my mittens when they are off. More than once, I have left a pair of mittens outside on my bike rack after taking them off to lock up my bike. If the three little kittens in the nursery rhyme had such an arrangement they probably would not have lost their mittens.

The infrastructure improvements help the Burlington part of my ride, but in Winooski riding is still a challenge. Because of traffic and road conditions, I have to take a zig-zag approach to get from my house to the Winooski bridge, and negotiating the bridge in either direction is always difficult.

“A Walking Life” by Antonia Malchik

In “A Walking Life” the author goes to Happisburgh, East Anglia to look for the footprints of ancient humans, the earliest known human traces in Europe. The footprints are over 800,000 years old.  Happisburgh is not far from Cromer, a seaside town that I visited one afternoon 43 years ago. I was living in the nearby Village of Aylsham and hiked and hitch-hiked to Cromer. It was a warm day in September and as I walked along the beach everything seems to be moving at once - the clouds, water running down into the ocean from high tide, my feet, the waves, my breath, and my thoughts. 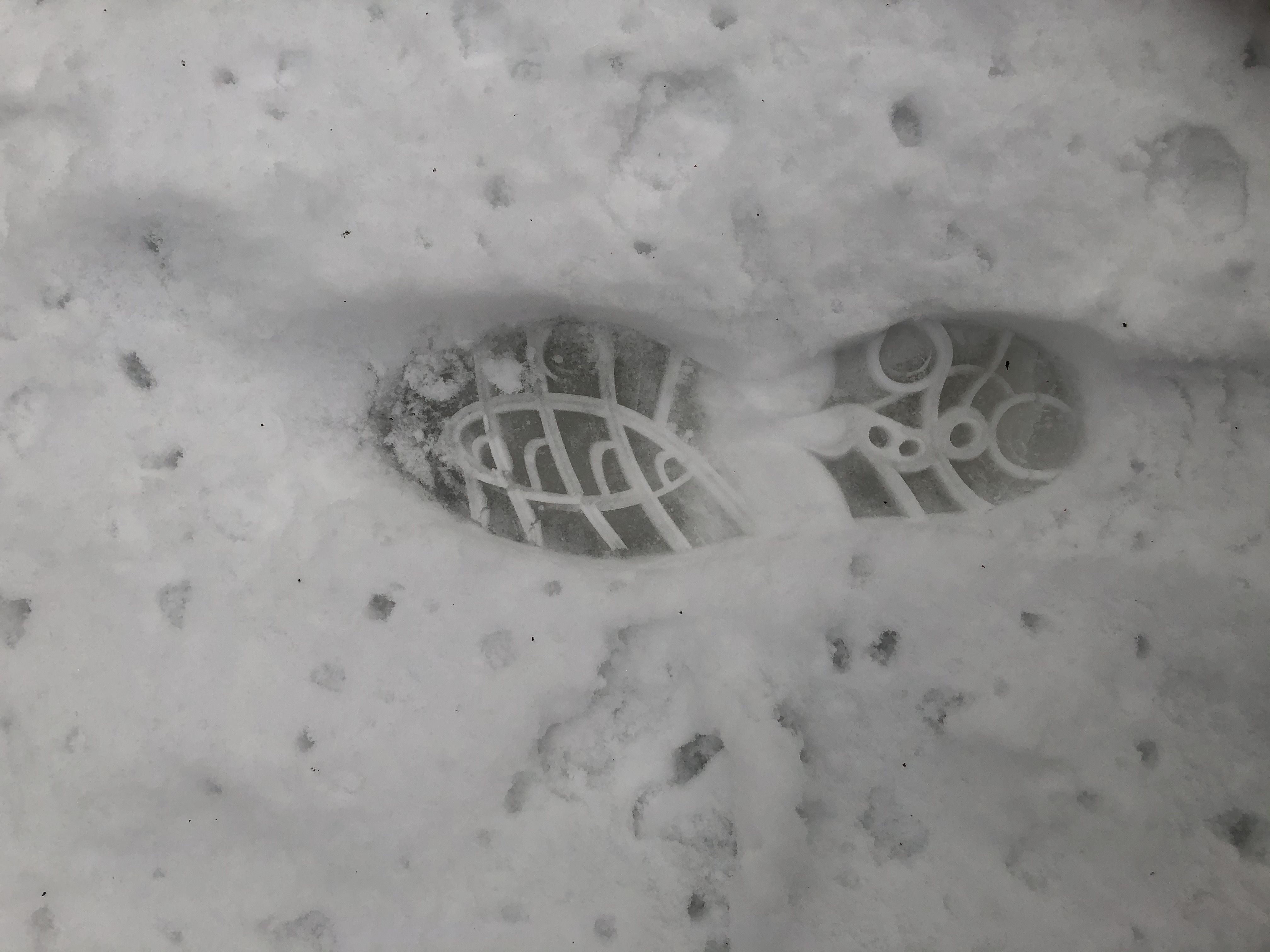 Early one Sunday morning in January, I took a walk through the Gilbrook Nature Area in Winooski. The snow had fallen the night before and I was one of the first people to walk through the woods.  I picked up the tracks of another walker and began to follow them. I decided to do the same walk as the unknown footprint maker had.  If I had the skills of Sherlock Holmes I would have been able to tell much more about the walker. Undoubtedly, if Holmes was operating today, he would have extensive knowledge of which brand of walking shoe have which pattern on their sole. As it was, the only thing I could deduce was that the walker probably had a dog with them. I felt pretty good about my tracking skills and I took a route through the woods that I had never taken before. After a while though, more tracks appeared and I lost the trail of the person I had been tracking. I guess I have to go back after the next snowfall to hone my skills!

The most famous literary footprint was the one discovered by Robinson Crusoe.  He was shocked because he thought he was alone on his island. I also like the footprints that Peter makes in “The Snowy Day” by Ezra Jack Keats.  Peter first walks with his toes pointed out and then with his toes pointed in. The illustration shows him looking back at his footprints. The same illustration is featured on the cover of the book, but in the cover picture, his footprints are pointed neither in nor out. I am not sure why. The most famous footprint of all was probably the first one Neal Armstrong made on the moon.

Recently, I was talking with my sister about our childhood. At a young age, we were allowed to wander around our neighborhood in Providence Rhode Island. It was a working-class neighborhood with some woods, empty lots, and a woolen mill. There were other children to play with but sometimes we were alone. When I turned eight I got a red bike that extended my horizons. We were expected to return for meals and when it got dark. That kind of freedom is rare these days. Some parents have an intense fear of having their child abducted even though it hardly ever happens. The vast majority of children are abused by people they know. Neglect is the most common kind of abuse. Because of the abduction fear, even if a child can go out and wander around there are few other children to play with. I don’t want to idealize childhood freedom. I was often bored and when we played sports a lot of our time was spent arguing over the rules. We also got into fights. But I believe that our independence and the various scraps and cuts we incurred instilled a kind of toughness and self-reliance. Bike riding, walking, and swimming continue to help me be resilient. Falling off my bike, getting cold, being tired and hungry, and riding for eight hours in hot weather all promote a certain kind of toughness. I don’t take risks just for the thrill of it, and I am not a masochist, but a certain amount of risk and suffering is inevitable if I want to ride and walk and swim. I don’t think that avoiding risk at any cost is healthy.

In December, I was riding up Intervale Road on a wet afternoon. I had just received a worrying email and I was not paying attention. Even though I was riding a fat bike, with wide tires, I crossed wet railroad tracks at the wrong angle and came tumbling down. A car behind me stopped to ask if I was OK but I waved the driver on. It was a good fall, I was not hurt and I got right back on my bike and rode home. The fall reminded me in a very direct way to stay focused when I ride.

Robert B. Irwin, in his book ‘The Stoic Challenge’, suggests that we can all push ourselves physically and emotionally to become tougher and more resilient. A long bike ride will inevitably bring unexpected challenges. I need to be resourceful and also be willing to endure a certain amount of discomfort. Irwin believes that if we accept the setbacks we experience each day and see them as tests given to us by the stoic gods, we may even start looking forward to our everyday difficulties.