Sometimes people ask me how many miles I ride each week.  I used to say that I did not keep track because I have OCD tendencies and it would be all too easy to get caught up in mileage.  In June my OCD  got the upper hand.  I went on the Vermont Bike Commuters Facebook page and asked about bike computers.  One member told me that she was getting a new bike watch and that I could have the old one for what I thought was a very reasonable price.  I biked out to Hinesburg and picked up the watch.  It took me a couple of weeks to figure out how it worked.

On my first really long ride, the watch ran out of power and died about 20 miles from home.  I was disappointed.  I found a portable charger that I got when I bought my iPhone. Now I can recharge the phone when I take a break during a long ride. 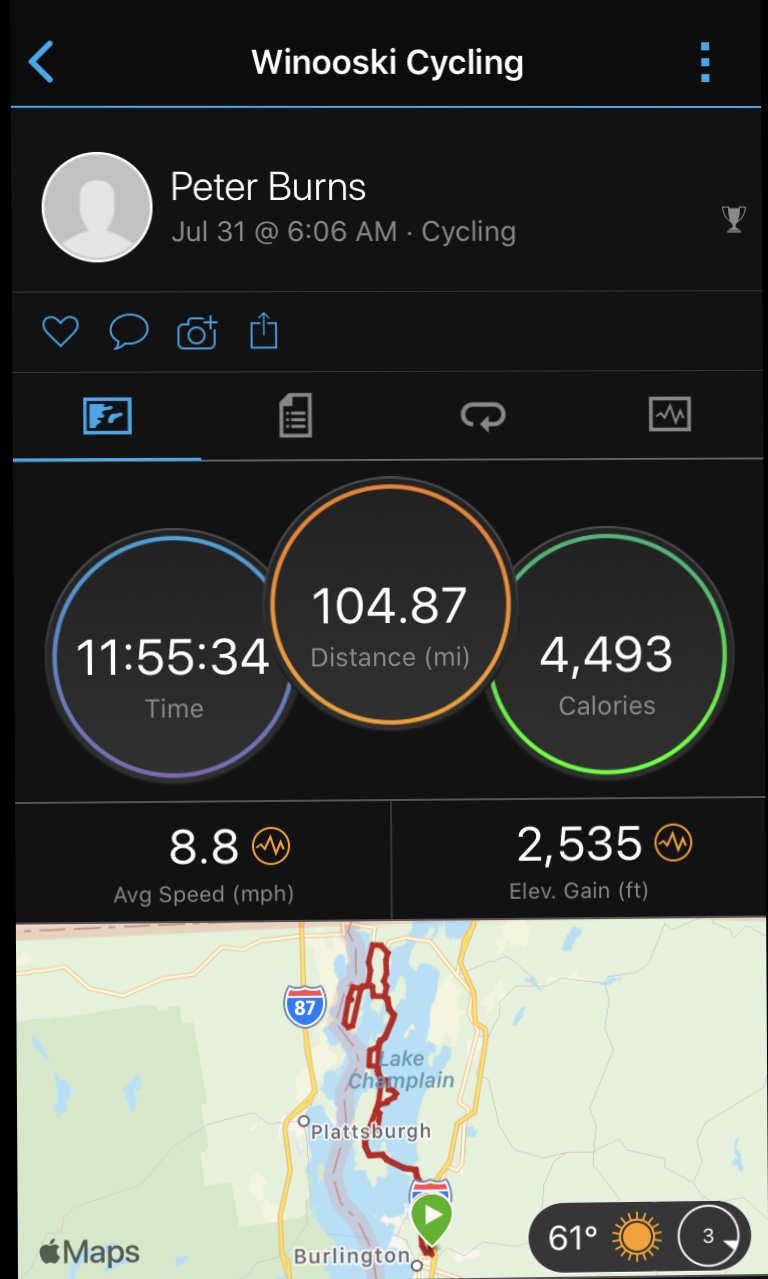 The watch also tracks my footsteps. I have set it to 10,000 a day, but on most days I do not reach that goal.  In the summer I take evening walks if I have not either had a walk with a friend or gone for a bike ride.  In the past, I used to walk around the big field behind Winooski High School and then head over to the other side of town and walk through the cemetery.  The whole route took an hour.  That was disrupted in July when construction started on the area around the High School.  It was no longer possible to walk from the high school field directly over to the other side of town.  It took me a while to settle on a new route.

The watch is made by Garmin and in late July their website was shut down for a while because of a cyberattack. For a week or so I could not download the information about my rides but eventually, they fixed the problem.

In July I used the watch to record my second lifetime century.  I rode up through the Islands and then around Isle La Motte.

Sometimes when I am riding along I think of something I want to write about.  In early June I thought that describing the food I snack on while bike riding would make an interesting essay.  Before I started writing I did a quick search of my blogs and discovered that I have already written about snacks.  Sometimes I forget all the topics I have covered so having a search function is helpful.  I could write about snacks again because a year later my snack philosophy has changed, but it is good to know that I have already covered the topic once.  When I first started taking long rides I often stopped for lunch and had a full meal.  Now I just stop every hour or so and have something light.  I eat a meal after I return home.  I used to drink three cups of coffee every day.  One in the morning with breakfast, one after lunch and one after dinner.  If I was out riding in the middle of the day, I usually stopped for coffee and bought a baked good to go with the coffee. Recently my doctors told me to stop drinking coffee so now I just stop every hour and have a snack and water.  My snacks include dried fruit, apples, oranges, bananas, pretzels, pita chips, and trail mix without chocolate. Chocolate melts in hot weather and then I end up eating a gooey mess.  In any case, a second doctor told me to cut out chocolate.  As the summer progresses there are more snacks available along the way.  Blackberries appear beside the road and I can often find an apple tree with edible fruit.  Farm stands provide cucumbers and tomatoes.  These are especially good if you bring along some salt.  I don’t tend to stop for ice cream, but that is also a viable option.  Someone once told me that you are allowed to stop for ice cream as much as you want as long as you are on a bike.  Not having to have coffee three times a day simplifies my life.  I used to orient my rides around where I was going to have coffee but that is no longer necessary.

During the first few months of the Covid-19 crises, I started taking nature walks with friends.  I usually meet one friend on Friday afternoon and another one on Saturday but that is not set in stone. Previous meetings had always been for lunch or coffee.  These walks are an example of the silver linings that have cropped up during this time of uncertainty.  I found I really enjoy walking with my friends, and that conversation flows easily.  Sometimes it is complicated setting up the meeting.  With one friend we always met at the same time and place on the same day of the week.  That all changed for the walks and we had some confusion about meeting at Ethan Allen Park vs Ethan Allen Homestead.  I blamed Ethan Allen for having too many things named after him.  At least neither of us went out to Fort Ethan Allen!

With my other friend, we have been noticing and photographing wildflowers.  Each time we walk there are new flowers.  I am familiar with many but by no means all of them.  I have also forgotten the names of some of the flowers. After our walk, my friend sends me photos of the flowers we have seen along with their names.

Usually, when I am walking  I am either memorizing or reciting poetry or practicing a story.  For a couple of weeks in late June and early July, I just walked, with no other added activities.  I have never walked plugged into a device.  During this period I enjoyed the ordinary, everyday quality of my Winooski walks.  There were moments of beauty and there is an amazing view from the top of Leclair Street but usually, the walks are through familiar places with familiar sights.

I particularly enjoy walking on gravel, rather than pavement.  The quarter-mile track behind the high school is gravel and so are the paths in the graveyard behind Saint Francis Church.  Sometimes there are other people on the track, but I seldom see anyone in the graveyard.