I have a rack on both of the bikes I use for commuting.  I have two large panniers and two smaller ones.  The large ones are red and the smaller ones black.  Most days I use just one pannier, but sometimes I need two.  Ortlieb is the company that makes my panniers.  The panniers are waterproof and sturdy but from time to time the plastic buckles break.  Ortlieb has been good about replacing the buckles.  I know that the panniers are waterproof because a couple of years ago when I was riding on a narrow dirt path next to Gilbrook Pond in Winooski, I lost my balance and tumbled into the pond, bike and all.  Luckily I was not hurt, but the bike was briefly submerged and so was I.  Later, when I opened the pannier, I discovered, to my surprise, that everything inside was dry.  I was grateful for the high-quality equipment and also grateful that nobody saw me falling into the pond!

Pannier is an interesting word. Outside of the biking community, not everyone knows what it means.  It comes from the Latin word for bread.  Originally a pannier was a basket for carrying bread. 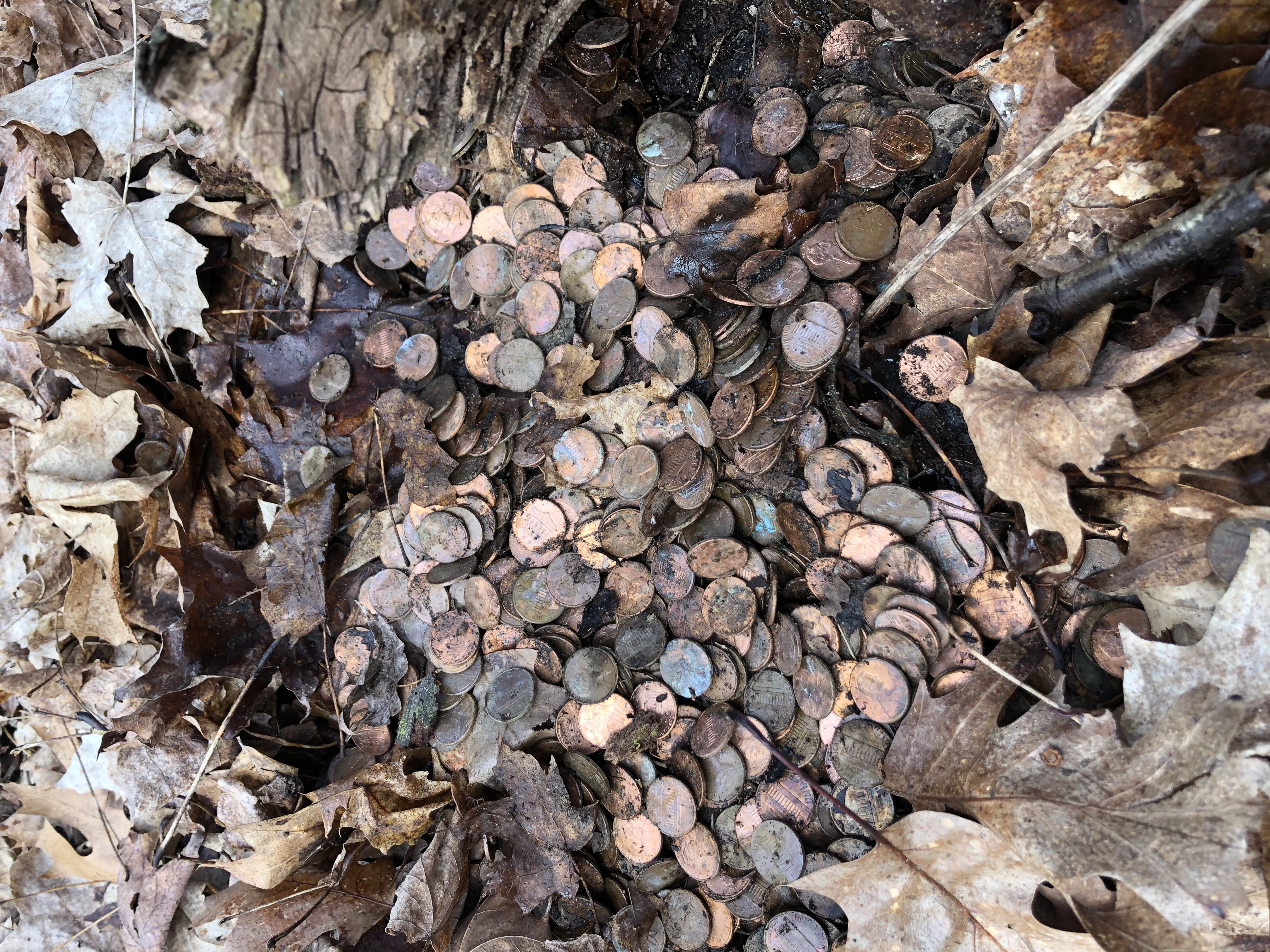 On April 4th I hopped on my bike and headed south on the Burlington Bike Path.  I crossed the bridge over the Winooski River and rode to Airport Park where I usually stop to pee.  Because of the Corona Crises, the port-a-potty had been removed.  I had a plan B.  A few miles farther on there is a fence that runs along the Colchester Bike Path.  Behind the fence is a good place to pee.  Unfortunately, because of the virus, many more people than usual were out walking.  In fact, when I got to the fence, a family was heading for my usual pee spot.  By this time my eyes were, metaphorically speaking, turning yellow.  I rode another quarter of a mile to the other end of the fence and was able to get a little privacy.  When I was finished taking care of business I notice a large pile of pennies partly covered in dead leaves.  They looked like they had been there for some time.  A treasure trove!  I only found the treasure because of the lack of a port-a-potty and the unusual number of people out for a walk.  The coins were silver or perhaps a copper lining to the virus crises.  I was very excited but the coins were too heavy to carry in my backpack.  I covered up the pennies and returned the next day with a pannier on my bike.  I loaded up the treasure along with a lot of dried leaves and brought them home.  I spread the pennies on my back porch and the wind blew away most of the dead leaves.  A few days later I put the pennies into a plastic bag and brought them to Hannaford’s on North Avenue.  I put the pennies into the coin counting machine and it added up to $14.13. Just as no one knows how this crisis will turn out, I don’t know the end of this adventure because I have not figured out what I will buy with my $14:13.

Last summer, in the late afternoon, I was riding North on Guinea Road in Charlotte.  Something about the time of day, the tranquility of the countryside and the lack of traffic made the experience magical.  I felt as if I was riding through an enchanted land.  This kind of thing happens very rarely.  Although I love to ride and the Vermont landscape is often very beautiful, the feeling of magic only comes once in a long while

Last year on a brisk August morning I was riding on Patchen Road in South Burlington wearing my full regalia - bike shoes, bike shorts, hi-visibility vest, backpack with a light attached,  windbreaker, bike gloves, buff, helmet with a light attached, and sunglasses.  A bike rider pulled up next to me wearing shorts and a T-shirt.  He looked at me and said, “Lots of equipment.”  He said it in a neutral way, but I felt judged.

I enjoy getting dressed up even for a short ride.  Most of what I wear is both practical and ornamental. In the ordinary course of things I would not wear a bright yellow, orange, or lime green but on a ride, being seen is important.

I try to coordinate my outfit with the color of my bike.  If I am riding my orange bike, I wear an orange hi-visibility vest and a yellow vest with my yellow bike.  It is easier for me to coordinate with my yellow bike because I have many yellow jackets but no orange jackets.  Men tend to wear clothing that fades into the background, but on a bike fading into the background is dangerous.  Up until the 17th Century,  men dressed as flamboyantly as women.  Even into the 19th Century, certain men enjoyed wearing bright colors.  Charles Dickens loves dressing in gaudy outfits.  He was particularly fond of a canary yellow waistcoat.

When I teach bike workshops, I often say, “How you look on your bike is more important than anything else.”  While I say it jokingly, the way you look does make a difference.  I feel good about myself when I am wearing cool bike gear.  In January, on a single-digit day, I was wearing a black jacket, black pants, an orange reflecting vest, a balaclava with a plastic mouthpiece, and a black helmet with a mounted light.  At the YMCA a little boy looked at me and said, “Why are you wearing that helmet?”  I said, “Because I am a ninja.”  He said, “Oh.” And followed his mom into the Y.  He was not impressed.  I still felt pretty good about what I was wearing. When I am not being frugal, I sometimes buy bike stuff that I don’t really need.  I buy things because they are beautiful or add to my bike riding experience.  As faithful readers of this blog know, I don’t own a car, so I  save money each year on transportation.  That money can easily be eaten up by high-end bicycle related purchases, so I  have to be careful.

In late February of this year, I had a chance to ride on a sunny day with the temperature in the low fifties.  I wanted to ride to Colchester and then, on the way back, stop at Shaw’s to get some hamburger buns for my son.  He is very particular and only likes Pepperidge Farm brand.  Sometimes City Market has them, but often I have to go to Shaw’s.  As I was getting ready to ride, I felt grateful that I have a wide variety of shoes, socks, tights, jackets, hats, gloves, and neck warmers to choose from. I knew it would be slushy so I put on a pair of waterproof Showers Pass socks and my 45nrth Japanther shoe, a pair of windproof tights, and a yellow windproof jacket.  During the ride, my equipment kept me comfortable temperature-wise and my feet did not get wet.  It was very satisfying to have figured out exactly how to dress for the weather conditions that day.

I had a different experience later in February.  It was raining hard when I left my house in Winooski for an appointment in South Burlington.  I had on waterproof showers pass socks and a pair of Northface shoes that had a little label that said, ‘Waterproof’. By the time I got to South Burlington, my shoes and socks were soaking wet.  After my appointment, I rode into Burlington.  Luckily, at work, I had a change of socks and a hairdryer.  I used the hairdryer to dry out my boots and by that time it had changed from rain to snow.  I was OK for the rest of the day.

Many Bodies in One

Every activity brings out a unique side of our personality. We are different people depending on what we are doing.  We switch between our different manifestations automatically.  Most people are not the same person at home as they are at work or at school.  I am a more assertive person when I am on my bike and I am willing to take the calculated risk of riding in all kinds of traffic and weather conditions. When I walk, I often find myself in a more contemplative mood.

When I get onto my bike, I change both physically and mentally.  My body activates the muscles needed to ride and my mind is more alert.  I have discovered that I can access this bike rider persona for other activities as well.  When I am feeling uncertain or afraid, I mentally put myself on my bike and I feel a little more confident.

In November I went to see my dentist. She is a wonderful person and a good dentist, but I feel anxious when drilling is involved.  I have had bad experiences with other dentists and sometimes Novocain is not 100% effective.  I experimented with bringing bike courage to the dentist's chair.   It helped that I was still wearing my bike gear but the dentist’s office also has a powerful effect.  Just before the drilling started I imagined myself on my bike.  That, along with deep breathing, seemed to help.