During this time of the Coronavirus, bike riding and walking remain a viable way of getting around and staying mentally and physically healthy. The days are getting longer and the temperatures are slowly climbing.  One silver lining to this terrible crisis is that there is much less traffic than usual.  For that I am grateful. Until we are told otherwise we should get out and walk and ride.

During the winter my bike rides are short.  They get longer as the weather gets warmer.  By the middle of May I am  usually taking long rides once a week. This continues until the weather gets cold again.  Every couple of years I have a goal for my summer riding.  I did a century a few years ago and then the year before last I did a dirt road hill challenge.  I climbed Brigham Hill Road, Osgood Hill Road and Cilley Hill Road all in one day.  About ten years ago I rode from the Smugglers Notch Ski Resort to the top of Smugglers Notch.  My friend B, who I have always thought of as my bike guru said, “That’s pretty good, but it does not count unless you ride all the way from Winooski”. This summer that will be my goal.  During the winter I ran into B and told him about this project and he said, “We could ride it together.”  I consider that quite an honor, because as far as I know, he always rides alone. We may not end up doing the ride together, but his encouragement makes a difference.  It is an 86 mile ride, round trip, with some serious elevation.  It will be a long day, but if I leave early in the morning, and take my time, I think I can make it.  It helps that I am at the right weight for riding and I have a good quality titanium/carbon bike with low gears.  This month my right knee has been sore, so who knows what will happen.  If I don’t end up achieving my goal, that is OK too, there is always next year!

Many years ago I was commissioned by the Vermont Humanities Council to create three stories based on the Arthurian Legends.  For six months I focused on learning all I could about King Arthur and the Knights of the round table. Then I created three stories.  I told them at various events over the next few years, until the commission ended.  I decided to write the stories down because up to that point, they were only in my head.  Much to my surprise, they came out as poetry.

One misty moisty morning, when rainy was the weather,

Uther and Merlin were walking, in the garden together.

Uther was a big man, stalking like a bear,

Merlin was a skinny one, slinking from his lair.

One misty moisty morning, when rainy was the weather,

I chanced to meet an old man, all dressed in leather.

All dressed in leather, from his toes up to his chin,

The first verse features walking and over the next three years, I memorized the three Arthurian poems during walks I took in Winooski, Burlington and other places in Vermont.  As I memorized the poems, I  changed and refined them.  I finished memorizing the last lines of the third poem in a field in Addison.

Here are the final lines of the last poem -

Five of the fairy folk came sailing to the shore,

They gathered Arthur into their arms and they were seen no more.

But the legends tell us, that in our darkest hour,

Arthur will return again, in all his glory and power.

After I finished with the Arthurian legends, I wrote and memorized three more poems based on well-known folk tales.  After that, I focused on learning poems by some of my favorite writers including William Blake, Edward Lear, and Lewis Carroll.  Now I have about an hour's worth of poetry memorized.  When I go for a long walk, I recite the poems to myself.  On shorter walks, I memorize new poems.   I speak the poems aloud and in the days before cell phones, I used to worry that people would think that I was talking to myself, but now it just looks like I am talking on a phone. Or so I imagine.

All the poems I  memorize have rhyme and a regular meter.  The rhythm of my walking combines with the rhythm of the poetry to create a mild trance state.  I find it relaxing.  I have tried reciting poetry while bike riding, but it does not work.  I need the rhythm of walking to help me remember the poems.

If you wish to memorize and recite poetry while walking, I suggest you pick a short rhymed poem.  Poems you were familiar with as a child are easier to remember than ones you have read just recently.  You might want to start with a nursery rhyme.  Practice one line at a time until you get it by heart.  Repetition is the key.  Be patient, memorizing takes time, but you can eventually improve your memorizing skills.

This is the poem I am memorizing now:

There is a singer everyone has heard,

Loud, a mid-summer and a mid-wood bird,

He says that leaves are old and that for flowers

Mid-summer is to spring as one to ten.

He says the early petal-fall is past

When pear and cherry bloom went down in showers

On sunny days a moment overcast;

And comes that other fall we name the fall.

He says the highway dust is over all.

The bird would cease and be as other birds

But that he knows in singing not to sing.

The question that he frames in all but words

Is what to make of a diminished thing.

A Philosophy of Walking by Frédéric Gross

For some reason, difficult to pinpoint, certain activities that attract more high-quality writers than others.  There are many more good books about baseball than football.  I like to read about bike riding, but books about walking tend to be more interesting.  Recently I finished ‘A Philosophy of Walking’ by Frederic Gross.  He is a French philosophy professor. Aside from the almost complete absence of women walkers, it is a pretty good book.  Many philosophers and writers use walking as a way to inspire their work.  I remember hearing Jamaica Kincaid talking about composing her novels while walking up and down in her garden in North Bennington.

A few days after finishing most books, I either remember nothing special about it or just one thing.  From ‘A Philosophy of Walking’ I remember his description of walking with just what you need for survival, nothing more.  This means trusting the world to give you food and shelter, and walking with just the clothing you are wearing, a pair of shoes, a hat and maybe a walking stick. In various religious traditions, mendicant monks, who depend on begging for the food and shelter travel with just the bare minimum.  Here is a story about one such monk. 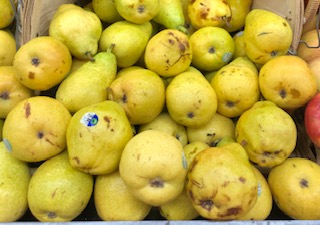 One warm golden autumn afternoon, in ancient China, a mendicant monk was walking along the high road. His few possessions included a loincloth, a straw hat that he also used for begging and a scythe, which doubled as a walking stick.  In the distance, he heard the sounds of the market day in a village.  Soon he was walking among the fruit and vegetable vendors.  He noticed a farmer with a handcart that was piled high with ripe, juicy pears.  He approached the farmer and said, “I depend on the kindness of strangers.  May I please have one of your beautiful pears.”  The farmer refused.  He said, “I worked hard for these pears.”  “But you have so many, and I just want one of them,” replied the monk.  Village folk loves an argument and soon a crowd gathered.  Some rooted for the farmer, others took the side of the monk.  The mayor of the town soon found out was going on, and he said, “Monk, I will buy you a pear.” The monk bowed deeply as he accepted the pear, and he said, “You have all been so kind, I would like to share my pears with you. A woman said, “If you have your own pears, why were you begging?” “Ah,” said the monk, “I have to grown mine first. I will need some warm water”. The woman ran off for some water. The monk ate the pear with great enjoyment until all that was left was a single seed.  He dug a little hole with his scythe, planted the seed and then watered it.  For a few moments nothing happened and then a murmur of astonishment rippled through the crowd.  A green sprout appeared and soon grew into a small pear tree.  Blossoms formed and fell off, leaves unfolded and then small green pears grew until they were fully ripe.  The tree was weighed down with golden pears.  The monk picked the pears and gave one to each person in the crowd, including the farmer.  Then he cut down the tree with his scythe and carried the tree out toward the high road. The farmer shook his head, he had been in a kind of trance.  He still had a pear in his hand when he turned back to his handcart.  The cart was empty and one of the handles was gone!  He quickly figured out what had happened.  “Thief!” He cried as he ran after the monk.  When he got to the high road, the monk was nowhere in sight.  Against a stone wall he noticed a familiar object, it was the handle from his cart.  In the distance, he could hear the laughter of the town folk.