How about Trading Car for Cargo Bike — A Lending Library Story

It just finished up a stay at Onion River Outdoors in Montpelier and is now at the Norwich Public Library until September 10th. After that, it’s on to Hartford, and beyond! We recently reached out to a Montpelier couple who loaned a bike from the library to learn about their experience.

They’re doing just fine sharing a single car for now, but if Kate McCarthy and Tom Leahey ever feel the need for another vehicle, they’ll strongly consider skipping another car and go with an electric cargo bike instead.

Most mornings, Kate will walk or bike to work while Tom drops their son at school with the car. That changed when Kate heard about the e-cargo bike that was available for two-day loans through the lending library. The couple booked back-to-back loans and picked up the bike from Onion River Outdoors. 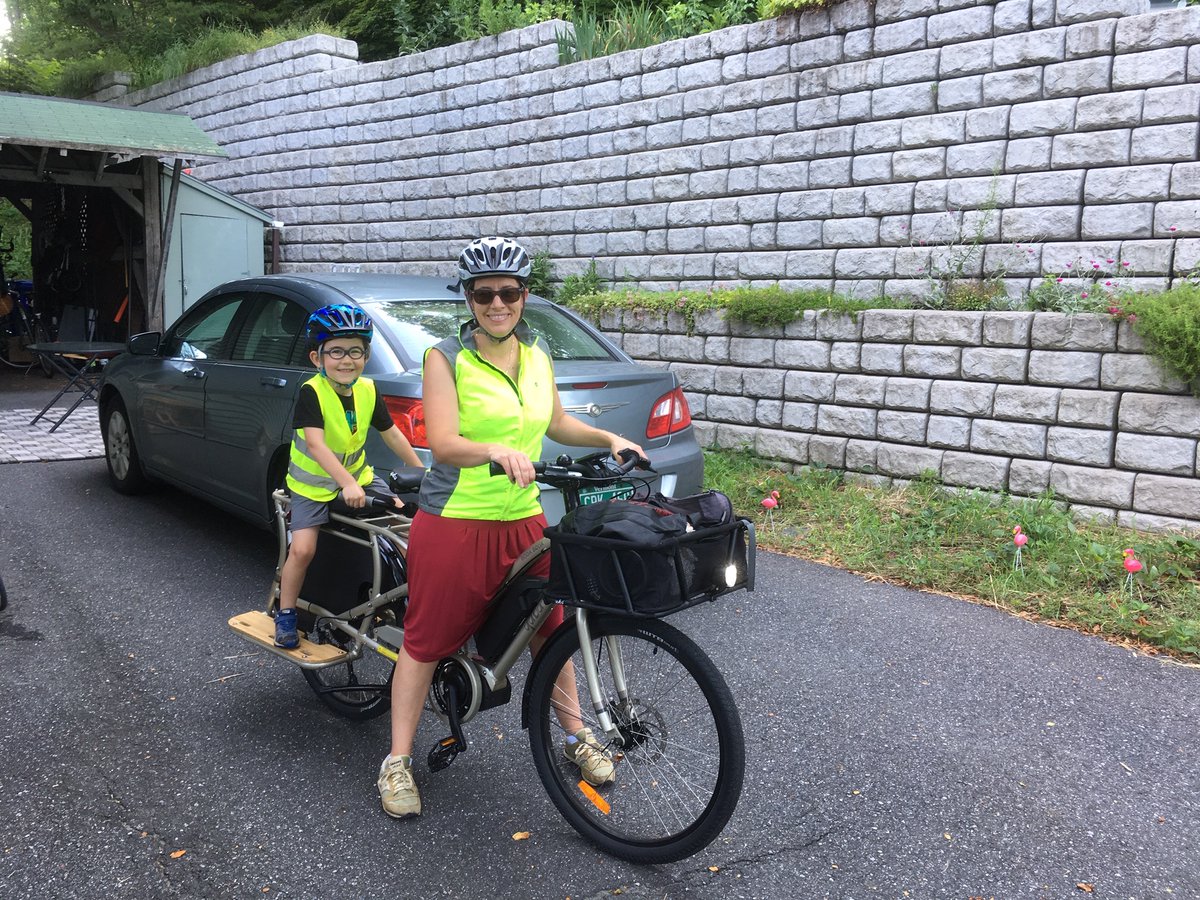 Kate recalled her immediate impression of the unwieldy-looking bike. “It was easier to handle than I expected. When I picked it up and saw this huge frame I thought, ‘Oh, it’s going to be wobbly and hard to control.’ It was different but manageable. That was a great feeling.” The couple quickly integrated the bike into their daily routine and began replacing their car trips to school and work.

The electric-assist made a big difference to both Kate and Tom, who each have very different commutes. Kate rides mostly on slower streets in town, while Tom’s route takes him on roads with faster traffic and sometimes-narrow shoulders. “My route is on a busy road with a lot of car commuters going 45 miles per hour. There’s a good bike lane most of the way, but there are times when it narrows,” said Tom, who remembered feeling more comfortable taking the lane when necessary, knowing that he wouldn’t be slowing traffic as much, or for as long. He was also much more comfortable navigating rotaries, which can be very intimidating on a purely human-powered bike.

Twitter, meet cargo bikes' newest, biggest fan. (And yes, I *did* ride on the right side of the road.) Listen with sound on for maximum delight. @LocalMotionVT @VNRCorg @tleaheyVT @YubaBicycles #betterbybike pic.twitter.com/ZXlHIKmZD3

The cargo bike’s passenger seating even allowed Tom and Kate to ferry their son to school and around town without the use of a car. “Biking and kid drop off can be mutually exclusive but with the cargo bike, the person biking can drop the kid off and bike to work," said Kate. The extra speed helps with scheduling, too. “The bike makes the ride to school about 10 minutes faster on either side which creates a little more wiggle room,” said Tom. “Our son loved riding on it, so he was totally in for making it his new way to get around.”

“We’re a one-car family and have been since 2003, said Kate.” “And we have been really lucky to be able to do that by finding downtown housing we can afford in the towns where we’ve lived. The cargo bike opens up a bit more time and creates that breathing room. If we get to the point where we’re contemplating a second car, I think we’d seriously consider a cargo bike instead.”