A Good Day for Bicycles at the Market 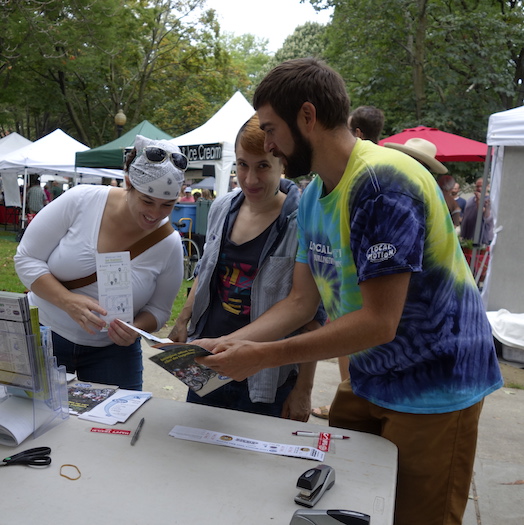 June 18 was a great day for Valet Bike Parking at the Farmers’ Market. Warm and clear skies augured well for a good turnout- how could you not bicycle to the marché on such a glorious day? Although only one volunteer, Katherine, had signed up by Friday, we had another volunteer, Paul, show up and report for duty. Armed with a stapler stuffed in his cargo pants pocket he leapt into service at the mere sight of two wheels...

“Incoming bicycles!” he’d pronounce and in seconds they were checked in and on the rack. Thanks Paul!
Katherine, a seasoned veteran, quickly brought her organizational skills to the forefront – the check-in table never looked so neat. It was a joy to work with such a great team; I’m humbled by how enthusiastic all the volunteers are to do a great job, leaving me to just shoot the breeze with our patrons.
Phil showed up, but not at usual time; he’s normally there waiting for me before I pedal in, a smug smile on his face. This week I was early, even by Phil’s standard, but he was nowhere to be seen! Oh well, extenuating circumstances prevented his early arrival, but I’m always glad to have the éminence grise attend and lend a helping hand. It just means I’ve got to be earlier than Phil each week from now on!
Every summer, we expect – or not- a contingent of cyclists from Quebec, who park at the ferry landing in New York and do the “three ferry ride”. Always led by our very own Burlington native Wayne Turiansky, who now lives in Montréal, he offers to organize the ride for an adventure club he belongs to, with over a thousand members. He limits the ride to 16 cyclists “Because that’s what the ferry can take at one time” and it's signed up in minutes!
They usually swamp us, showing up unexpected and we having to scramble to find space for them. But this time we were prepared! Wayne gave me advance notice this time so we set up 2 extra racks and hung a sign on the racks to let them know we appreciated their appearance.
They showed up right on schedule, and we escorted them to the special area, practicing our fractured French as best we could. They stay as long as they can, with most visiting the nearest ATM first before they have to catch the Burlington-Port Kent ferry at 1:30. Bicycles mean business. Anyone listening on Church Street?
When I was in Taipei at Velo-City, one of the sessions highlighted the efforts of the mayors of two Japanese towns separated by about 70km of bridges to create a better bicycle tourist experience. They collaborated, along with the regional governments, to create a safe and attractive route and now have become a cycling destination with both towns prospering as a result.  Bicycles mean business!
Time flew by and it was soon 2 PM. Together with Rick and Pauline we quickly gathered the signs, rolled up the tape, dismantled the racks, packed up the tent and loaded the trailer. Whew! Merci à tous! seems appropriate for this day.
Also, thanks to a suggestion from a previous volunteer, also a Katherine,-who happens to be a Professor of Mathematics at UVM- we now keep all of our claim check stubs in numerical order, duh, so its’s easy to find the occasionally tardy cyclists who remain “out there” after closing. We always get their cellphone number so we can advise them we’re closing; however my greatest fear is they turn their phone off, argh!, and I have to wait and wait for them. Luckily the 2 recalcitrant pedalers showed up before we were finished, so not a problem. This time.
Meanwhile, a shout-out to Chris who started the day at 7 AM, opening Valet Bike Parking for the Run for Empowerment and transitioning into the Food and Wine Festival which didn’t close until 8:30 PM. Lots of cyclists who aren’t attending either event avail themselves of our services at the Waterfront and are glad to see us there. Always a great outreach opportunity. Watching Chris in action, he’s like a gentle carny, offering everyone maps, brochures and the new membership applications to one and all- great job!
After the VBP gear was safely stowed in Grant St, I stopped down for a few minutes to give Chris a break during his long shift. Two older cyclists came by from the Middlebury area, seeking suggestions on safe routes to cycle in the area. They commented that there didn’t seem to be as much cycling in the Middlebury area this year, possibly related to the tragedies of last year and wondered if there was anything that could be done to bring a higher level of tolerance and courtesy between cyclists and cars. It always brings to mind one of my favorite sayings of a past president,
“I know the human being and fish can coexist peacefully.”