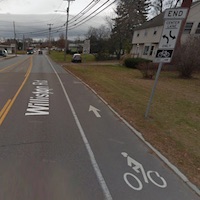 We are delighted to report that the promised addition of bike lanes to Williston Road between Earl's Cyclery and Tafts Corners is happening—and we're bummed to report that it won't happen until 2017.  (The delay is to accommodate a major subsurface utility upgrade, which is much better done before the road is repaved than after.)  The delay is frustrating, but the bike lanes are baked into the design, which means they WILL get built.  Read on for a few screenshots from the paving plans, so you know we aren't blowing smoke!